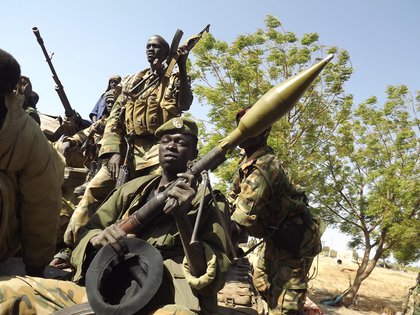 The United Nations said on Tuesday that more than a thousand people died in inter-community clashes in South Sudan during the first half of the year, amid an upswing in ethnic tensions in the African country despite the decline in political violence after the 2018 peace agreement.

The head of the United Nations Assistance Mission in South Sudan (UNMISS), David Shearer, has stressed that “more than a thousand people have died in (the state of) Warrap during the first six months of this year.” “There are many people who want to carry out attacks in revenge for the people who have died,” he added.

“We have the potential for more conflict in these areas. It is very important that we are able to initiate a dialogue between the different communities, instead of leaving them unresolved and leading to a new war,” he said, before warning of ” hugely devastating effect “of these clashes on local communities.

He also indicated that “more than 400 people have been kidnapped” and remain in the hands of “rival communities”, which “lays the seeds for a conflict in the future.” “If you have lost your wife and children and they are in the hands of another community, there is no feeling of peace until you get them back,” he argued.

“The potential for a conflict in Jonglei as a result of what has not been resolved is very, very high,” stressed Shearer, who stressed that the situation is the same in Warrap and other areas of central South Sudan shaken by these conflicts.

Shearer has also asked to accelerate the implementation of the peace agreement, although he has recognized that “it is something very difficult.” “I do not understand why you have to go so slowly,” he lamented, while asking for the announcement about the people who will be county commissioners, given the power vacuum in the absence of these appointments.

“All this has to move forward because when there is a vacuum there are people who want to take advantage and exploit it, which is why conflicts arise,” he said, while warning that “the opportunity for conflict increases during the dry season” given that ” during the rainy season people have limited movements. “

“There is enough water and generally there is food for cattle. When the dry season arrives, people begin to move towards less limited water points, so an increase in tensions can be anticipated,” he explained at a press conference.

In this sense, he stressed that the UN considers it a priority to “breathe new air into the peace process, which is stalled at the moment.” “We need to see action on several fronts so that the elections can be held at the end of the transition period, as promised to the citizens of this country,” he added.

For this reason, he has emphasized that “a priority is the appointment of officials at the county level to fill the power vacuum that has existed since the transitional Government was formed” and has outlined that “these people are essential to prevent them from being solved problems in the beginning, before they escalate into violence. “

SUPPORT TO THE NATIONAL DIALOGUE PROCESS

Shearer also expressed his support for the national dialogue process that concluded this Tuesday and stressed that “it has had broad participation” and “has given people from all over the country the opportunity to share their opinion on the future” of South Sudan.

“People have spoken frankly, honestly and fearlessly about the problems they face, but particularly about their disappointment over the peace process,” he stressed, while acknowledging that “it is disappointing that not all parties have been represented in the dialogue. “

“I believe that those who have not been there have lost a historical opportunity to unite as a people and have their voices heard,” he said. Among the absences is that of the former rebel leader and current First Vice President, Riek Machar.

Likewise, the president of the National Democratic Movement (NDM), Lam Akol, has not participated. Both Machar and Akol argue that the peace agreement is above these reforms and have demanded the application of all its points of the aforementioned pact.

The president of South Sudan, Salva Kiir, stressed this Tuesday that the conclusions of the national dialogue conference will be included in the Constitution and has stated that “it represents the vision of a broad sector of society.”

The conference, which started on November 3, has given its support to a federal system with a return to the territorial division of 32 states and a limit of two terms in the Presidency, according to the minutes of conclusions, collected by the South Sudanese station Eye Radio.

The delegates have indicated that in the country there should be a presidential system with two vice-presidents and have stressed that the president may hold office for only two terms of five years. It is not yet clear whether Kiir, who took office after independence in July 2011 but has been in charge of the country since 2005, could stand for election. The current Constitution does not set term limits.

Delegates have also supported the transfer of the capital to the city of Ramciel, in the state of Lagos, and where the historic South Sudanese leader John Garang wanted to take it, who was the first president of the Autonomous Region of South Sudan for several weeks. in 2005, before his death in a helicopter accident, after what was happened by Kiir.

CRITICS OF THE LAST BATTLES

In another vein, Shearer has criticized the fighting that occurred last week between the South Sudanese Army and the rebel group National Salvation Front (NAS), led by Thomas Cirillo, which led to the brief withdrawal of the rebel coalition Alliance of Opposition Movements. of South Sudan (SSOMA) from contacts with the authorities in Rome, mediated by the community of Sant’Egidio.

“I was disappointed by the reports on the recent fighting between the Army and the NAS forces, but it is encouraging to see that the parties have returned to negotiate and that the SSOMA can be included in the Verification and Supervision Mechanism of the Transition and High Agreements. the Fire (CTSAMVM) for the New Year “, he highlighted.

Among the SSOMA rebel groups, united since August 2019 in the alliance, are the NAS and the United Front of South Sudan (SSUF), led by former Army Chief Paul Malong. The SSOMA signed in January a declaration together with the Executive to commit itself to a ceasefire and to continue negotiating to find a solution to the conflict.

The Unity Government in South Sudan was launched in February, following the materialization of the peace agreement signed in 2018 by Kiir and Machar, who was reappointed as vice president, a position he held before the civil war.

However, there are still some important points pending for the implementation of the peace agreement, including the unification and deployment of the joint security forces and the reconstitution of Parliament, the body that will be in charge of implementing the reforms agreed in 2018 between the parts.