“Tintanita” by surprise; Juarez to vindicate

Alejandra “Tintanita” Soto is surprised. His youth and hunger for triumph will be his weapons to face former world champion Mariana Juárez, in what will be the stellar fight that will be presented tonight at the López Mateos Arena, in Tlalnepantla, State of Mexico. The fight will be eight rounds at bantamweight.

The nice “Tintanita” Soto surpassed without any problem with the scale when marking a weight of 52,500 kilograms, otherwise of the “Barbie” who will have to pay forfit when going overweight with a record of 55 kilos.

“I am motivated, we have not stopped training. Many people do not believe in me, but we go with the desire to succeed. If I win it will be a great pride and that’s what we come ”.

In other matches hosted by Divided Decision and Silva Boxing, Luis “Coto” Vidales will face Emanuel Villa at ten rounds at super welterweight; In the international fight Mexico versus Italy, Andrés Terán will raffle the physical with the European Giuliano Perrota in bantamweight to six rounds.

The actions will start at five in the afternoon, and the ticket will cost 500 and 250 pesos, which can be purchased at the López Mateos Arena box office.

Alejandra Soto, along with promoter Alejandro Reyes and “Barbie” Juárez, with also promoter Aarón Silva, in what was the weigh-in ceremony. 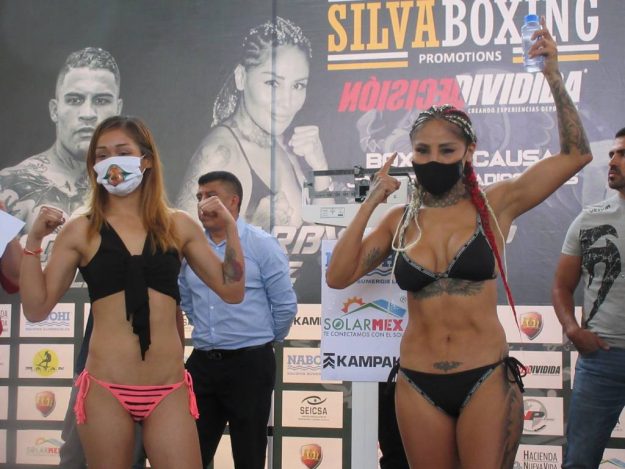 The “Tintanita” Soto (left) knows that a victory over Juárez would catapult his career.