Tay released his song today Mr. Perfectly Fine – which he wrote in 2008 – and it’s about Joe Jonas. In case you don’t know, Taylor Swift is gearing up to release Fearless (Taylor’s version) this week and has several previously unreleased songs from “From The Vault,” Mr. Perfectly Fine was one of them.

And well, Joe Jonas’s wife, Sophie Turner reacted to Tay’s song. As you may recall, if not what I’m here for, Taylor Swift and Joe Jonas dated more than a decade ago and Swift even said she regretted badmouthing Joe on ‘Ellen’ in 2008.

This was what that Sophie posted about Tay’s song, Mr. Perfectly Fine: “It’s not a bob” (not a good song). LOL! 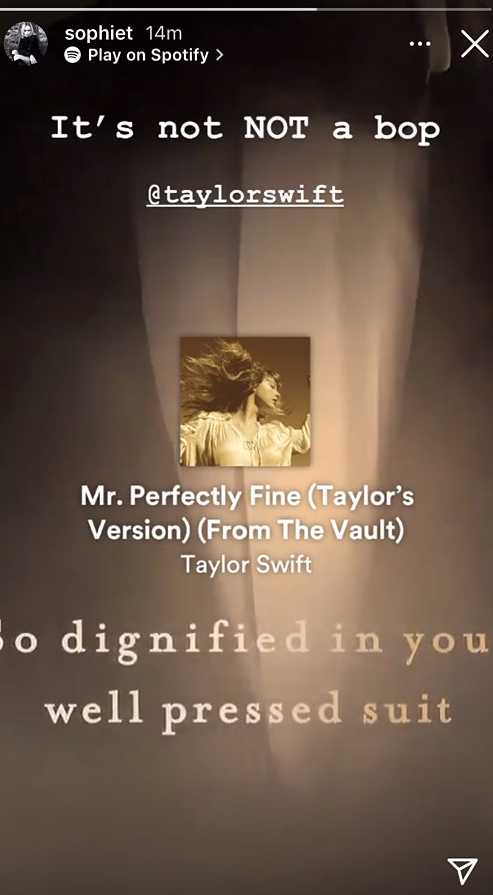 On Twitter the fans were commenting on how Taylor jokingly kills him in the song.

The lyrics say things like, Mr. Perfectly fine, how is your heart after breaking mine? Mr. Always at the right time at the exact time, Mr. Casually cruel, Mr. Everything revolves around you, I have been Miss Misery since your goodbye and you are Mr. Perfectly fine. That he had told her that he would never leave, and that then it was Mr. I changed my mind… Bahahahahaha… (come on, I listened to the song to criticize her).

Well, it’s funny, isn’t it? It was a relationship from a decade ago, and he broke her heart… Do you remember Joe leaving her on the phone? She destroys him, but it is clear that it hurt him to leave her. I liked the sound, it took me back to 2008. I think Sophie’s response is funny.

Mr. You never told me why, Mr. Apologies hypocrite so you don’t look like the bad boy, you forgot you even heard my name …