Spain says goodbye to its dream of winning the third consecutive gold after falling this Wednesday in the quarterfinals against Serbia after an extension (71-64) in which the problems of the final stretch of the last quarter increased while opposite Sonja Vasic was lethal.

Match corresponding to the quarterfinals of the women’s Eurobasket played before about 1,000 spectators at the Fuente de San Luis Pavilion (Valencia).

All the forecasts pointed to an even duel and they were perfectly fulfilled with a clear predominance of defenses and continuous contacts that were not indicated and that provoked the protests more than justified by Lucas Mondelo.

The Spanish got cancel in the first half one of the great stars of his rival, Vasic, the Spar Girona player who retired to the locker room with three points (and five rebounds) with a sad 1/6 from field goals.

With Cristina Ouviña and Astou Ndour as references, the current European champions took four points ahead of 3:27 from the end of the first quarter (8-12), but Serbian nationalized American Yvonne Anderson led the recovery Balkan (13-15 after the first 10 minutes).

Spain started the second quarter very well on the scoreboard with two consecutive baskets by Raquel Carrera (17-25 at 5:04 intermission), but from there those of Marina Maljkovic (daughter of the legendary Barça coach Bozidar) intensified their pressure to get closer to two points (23-25) that Ndour expanded just before intermission (23-27).

Ndour went to 12 points in the first action of the third quarter (23-29). It was a mirage. Nevena Jovanovic’s emergence with eight points and two triples together with the offensive problems of the Spanish contributed to turn the scoreboard (35-32).

They suffered those of Lucas Mondelo to stay alive and finished the fourth perfectly with five points from Maite Cazorla and two free throws from Cristina Ouviña to balance the fight in the absence of the last 10 minutes (43-43). 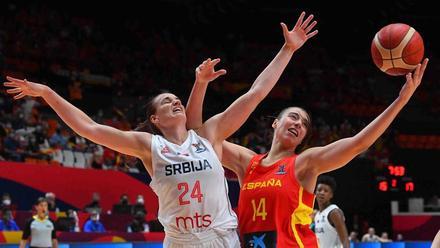 Spain could not with the Serbian defense in the key moments

Silvia Domínguez emerged with a sensational triple to return the five-point income to Spain (45-50) and everything seemed to be going well despite attempts to put pressure on the defense of the Balkans by extending the lead to six Laura Gil (53-59).

However, Yvonne Anderson scored seven consecutive points in every way possible (two free throws, a two-shot, and a triple) and Serbia attacked to take the lead with a minute from time. with 60-61. And Vasic scored … but right after possession ran out.

The Spar Girona star had completed a magnificent second half and went to 17 points after a basket with the reverse of those that she executes perfectly. 62-61 in the absence of 18.4 and with possession for Spain. And a single fault from Serbia! Cristina Ouviña had two free throws to win the match. He scored one and at least forced overtime (62-62).

Spain had only scored two free throws in the last three minutes of the fourth quarter and only scored another two in an overtime in which they had no options while Vasic was at ease to finish with 19 points. In the end, 71-64 and … to think about Saturday to win a place in the Premundial.