Raspberry Pi are wonderful miniPCs, but they are also modest and limited. That’s at least what it sounds like until someone comes along who tries to push the limits of technology and do things that a device could theoretically never do.

This is what Jeff Geerling is trying, who has been trying for a long time to figure out how to connect graphics cards like the GTX 1080 to a Raspberry Pi Compute Module 4. At the moment he is not succeeding, but his effort is unique and there are certain options that he will end up succeeding.

Graphics cards do not work at the moment, but other PCIe cards do

Geerling found that the Raspberry Pi Compute Module 4 has an accessible slot for PCIe cards, and although that option is limited to a 1x interface of a PCIe lane (when graphics cards are usually connected to 16x slots), it is theoretically possible to take advantage of it to connect a graphics card to this little miniPC. 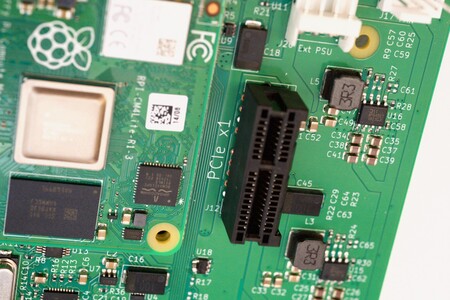 What for, you ask? According to Geerling, the idea would be to take advantage of its power to games, rendering, CUDA or even cryptocurrency mining.

The fact is that this developer – and he is not the only one – got down to work and has been trying to connect several graphics cards for some time taking advantage of that PCIe connector. The last one has been nothing less than a GTX 1080.

To do this, it tries to take advantage of the NVIDIA drivers, both the owners and that Open Source effort called NouveauAlthough it makes small progress, it has not yet managed to get an external graphics card to work correctly in the small Raspberry Pi Compute Module 4.

That does not mean that I will not get it, and certainly by trying it that it does not fit: Geerling has not only tested various graphics cards, but also other types of PCIe peripherals such as USB cards, M.2 NVMe adapters or network cards, and has been successful in taking advantage of some of them.

That effort is managing to create an interesting database with those peripherals that has been able to make it work and that therefore they propose new ways to take advantage of the Raspberry Pi, a product that we thought was more limited but that attention, it turns out that it can give more game (and never better said) than it seemed.