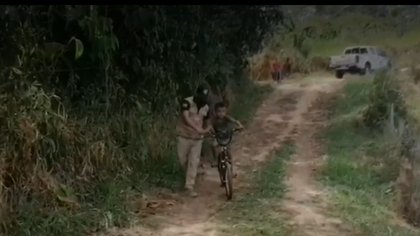 In the rural area of ​​Aguazul, Casanare, soldiers from the humanitarian demining engineer battalion of the National Army found a 6-year-old boy, who was riding a bicycle without tires, moved by the minor’s story and decided to give him a new bicycle.

Angel, is the name of the child that the soldiers saw who passed by the sidewalk, pushing himself with his feet to move the bicycle that had no tires.

“When I see Ángel it is inevitable not to remember my children, and to think that many times we are not grateful for everything that life gives us”Reflected Sergeant Alexánder Barbosa, leader of the company.

When the soldiers saw Ángel’s desire to learn to ride a bicycle and see the conditions he had, they decided together to join forces and give him a red and black bicycle. The child, surprised and with joy, said “thank you and God bless you.”

Ángel’s father, José Ángel Vargas, told Caracol news that “My son has aspired to be a cyclist and he came across a thrown bicycle that other children had left when they lived hereWell, he got attached to that bicycle and goes around up and down on that bicycle ”. He even took her to school even if his parents disagreed. 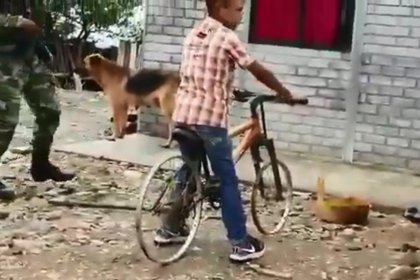 In the rural patrol work carried out by troops of the Artillery Battalion # 4 General Jorge Eduardo Sánchez Rodríguez, Bajes, of the IV Army Brigade, in July 2020, the soldiers found themselves on a path in the Pascuitá town center, Ituango. , to an 11-year-old peasant boy on a bicycle that was without a chain, tires and no brakes.

This caught the attention of the commander of the platoon that was passing through the place, a first corporal named Mendoza, who reported the situation and made known the recordings that he took of the boy with his bicycle to the battalion commander, Lieutenant Colonel Fredy González, who He immediately started contacts with private companies to get a good and appropriate bicycle for that rural area, in order to take it to the child.

The officer said that his request was heard by the owner of a bicycle distributor in Medellín, who joined the campaign and donated the bike. That was how they took her to Ituango, from where the military began a 3-hour trip through a tertiary road in poor condition to surprise the boy on the sidewalk.

When the soldiers arrived at the humble home, neither the little boy nor the family believed it. The soldiers arrived and knocked on the doors and in the presence of his parents they handed him the bicycle, Kevin Echavarría, and gave him gloves and a protective helmet.

Large companies that received government help during the pandemic 76 massacres occurred in 2020: United Nations annual report on violence in Colombia