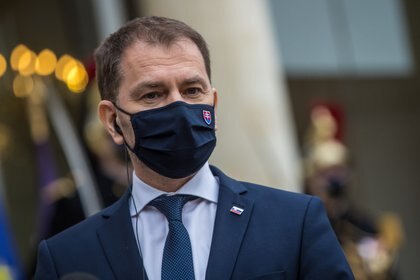 Prague, Feb 20 . .- The dominant presence of the British mutation of the coronavirus, an ineffective system for tracking contagions and a late national confinement have made Slovakia, a partner of the European Union (EU), currently top the world ranking of deaths from covid-19, with more than 16 daily deaths per million inhabitants in the last seven days.
The Central European country of 5.4 million people faced the first wave of the pandemic practically unscathed a year ago, with a balance of just 28 deaths attributed to the virus between March and September, but since then the death toll has skyrocketed to 6,350.
According to the “Our World in Data” portal, linked to the British University of Oxford, Slovakia recorded an average of 16.1 deaths per million inhabitants in seven days this Friday, the highest death rate from SARS-CoV-2 in the world, ahead of Portugal (13.4) and the Czech Republic (11).
VERY PRESENT BRITISH STRAIN
The British strain B.1.1.7 was detected for the first time during the Christmas holidays in the eastern part of the country and since then it has only exponentially gained ground, becoming the main source of contagion and death from coronavirus.
“At the end of the year (2020), the B.1.1.7 variant was imported into several Slovak regions, and in a few weeks it completely replaced the other variants,” Jozef Nosek, the biochemist who made the genome sequence in Bratislava, told .. of the British variant.
In the midst of an unknown situation and with government restrictions to stop the pandemic, in force since the Christmas holidays, and that do not take effect, the Prime Minister, Igor Matovic, warned at the beginning of February about the presence of the British strain in the 71% of infections.
This confirmed the trend observed in January, which led the Prime Minister to predict this week that “the proportion of the British mutation has grown to levels that will make it very difficult to get the situation under control, and will cost many lives.”
INEFFECTIVE TRACKING SYSTEM
In addition to the British mutation, experts blame the current situation on “an ineffective infection tracking system,” Nosek points out.
Slovakia pioneered mass population testing last fall, but never managed to isolate all sources of infection in the absence of an effective tracking system.
In the end, the country ended up opting, shortly before Christmas, for a new general confinement, although this “arrived late and with many holes”, the Slovak expert says.
According to Nosek, in the first wave there was a mandatory quarantine for those arriving from abroad and this contributed to the low incidence of infections.
However, “these restrictions were lifted too early, resulting in increased importation of the virus, especially the more infectious variants, which was followed by extensive community contagion.”
FEAR OF SOUTH AFRICAN MUTATION
To avoid similar risks with the South African mutation (B.1.351), already present in some regions of neighboring Austria, the country has established a mandatory 14-day quarantine, although after eight days the interested party may undergo a PCR test and, if the result is negative, abandon isolation.
The hospital situation, with 3,626 hospitalized people -323 of them in serious condition-, is at the limit of its capacity in the two main cities of the country: the capital Bratislava and Kosice, as well as in many hospitals in the provincial capital.
With an overwhelmed medical staff, the Slovak government decided this week to activate the EU’s mutual collaboration mechanism for emergency situations.
Bratislava has asked the EU to send 10 doctors and 25 nurses, who will provide their services in various departments of anesthesia and intensive medicine or in intensive care units.
Slovakia has so far vaccinated 4.6% of its entire population with at least one dose, according to official data.
The Government announced last night (Friday) the purchase of 2 million additional doses of the Russian Sputnik V to expand its offer of vaccines, apart from the three drugs (BioNtech / Pfizer, Moderna and AstraZeneca) that it has already acquired within the framework of the community purchase and that they are arriving in the country with some delays.
The Russian drug, which is administered within the EU for now only in neighboring Hungary thanks to a national license, is scheduled to arrive in Slovakia in June, as announced by Prime Minister Matovic himself, who imposed this purchase against some resistance in your own cabinet.
Gustavo Monge