There is still, what seems to many, an eternity for the launch of Super Mario 3D World + Bowser’s Fury. However, while waiting to be able to enjoy the review of the beloved delivery of our favorite plumber (and all its extra content) on February 12, tons of information continues to be released. And it is that the various reserve packs are added modifications in their possible download size, the opening of their official website or even new conceptual arts.

As many of you will remember, just after the Kyoto team announced Super Mario 3D World + Bowser’s Fury in September last year, the title debuted on the eShop with a 5GB download size. Well, after recent updates, your file in the eShop has been modified, indicating that the game it will occupy only 2.9 GB (compared to 1.7 of the original delivery released on the now defunct WiiU).

On the other hand, Nintendo has opened the official website from Super Mario 3D World + Bowser’s Fury for North America. And this website is not limited to expanding information on the title, but also shows us some unpublished images so far. Do you want to see some of them? We leave them at the foot of the paragraph:

As you can read, with each new image shown or detail revealed, the expectation and hype increases exponentially. Are you looking forward to the arrival of Super Mario 3D World + Bowser’s Fury to Nintendo Switch? We want to know your opinion! 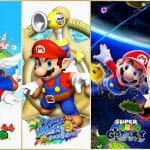