This Tuesday Filipe Luis will live a special match between Atlético de Madrid in which he triumphed as a footballer and Chelsea, set in which he spent a season without much luck. Now from the ranks of the Flamengo has taken the opportunity to give an interview to the English newspaper Daily Mail and launch new compliments to Diego Pablo Simeone in the Champions League preview

His return to Atlético

“Now I can receive and send messages to him as a friend, but back then, every time I received one (looks dreadfully at the interviewer), it was stressful. (In one of those messages) He told me: ‘Come back, we’re going to win again and I need a left back like you.’ I came back, I played well and he said, ‘See, you just play well with me …’ It brought out the best in me. He knew every inch of my brain. “

Work with the Cholo

“I give you my word; it is not easy to play for Simeone. It has no heart. He never says to himself: ‘Oh, what a shame, poor player, I need to do this or that.’ He will decide what he has to do simply in search of victory (…) He made him (Atleti) the monstrous team they are now. That success has a name: Diego Simeone (…). He wastes no time. He will never do a workout like, ‘Come on, let’s have a good time today.’ I was an unconfident left back in December when he arrived and the best in the world in January. He is the only one who has managed to get that out of me ”. 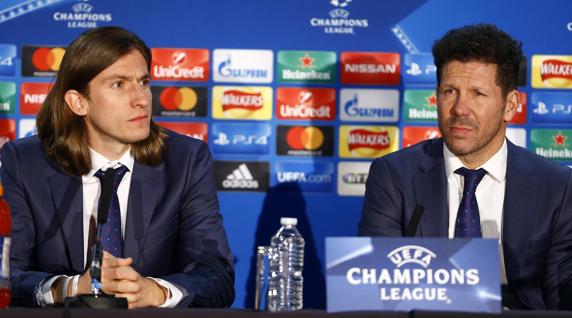 Filipe Luís and Simeone during a Champions press conference.

“The day before the 2014 final I received 200 messages of good luck and made the mistake of looking at them. It put a lot of pressure on me. I didn’t know what it was to play a final. I ended up playing one of my best games. I never gave a bad pass, I defended Bale better than ever. It was perfect. But in the second part I started to feel cramps from the tension before the crash ”.

“I prepared myself better. I did not reply to a single message! It was the best season of my career, but we lost on penalties. I cried a lot. Unlike two years ago, he had a feeling there would be no other chance. But, write down my words: ‘I’ll have another as a coach one day.’

“When I was on the bench in the first game I knocked on his door and asked, ‘Why did you bring me here? Why didn’t you leave me at Atlético? ‘ He told me that he didn’t feel as safe defensively with me as he did with Azpilicueta. He told me I had to earn the job. I couldn’t expect by name to be the first choice. He was right, I was not playing well. But I also think that you have to be in the field to improve. I don’t regret the signing because it was one of the best teams in the world, but everyone wants to play! At that moment I felt betrayed. I didn’t want to work with Mourinho for another year. But it wasn’t his fault. We won the final and I have the medal at home ”.

“Eden, along with Neymar, are the best players I have ever played with, at the level of Messi. He did not train well, five minutes before the game he was playing Mario Kart in the locker room. He warmed up without tying his boots. But nobody could take the ball from him. He went with three or four players and won games by himself. Hazard is very talented. Maybe he lacks a bit of ambition to say: ‘I’m going to be the best player in the world.’ Because it could be ”.