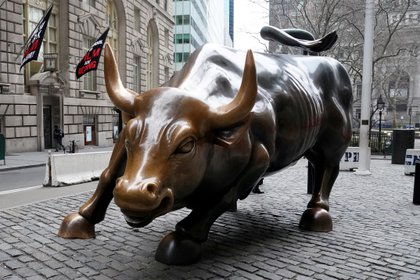 The Sicilian Sculptor Arturo Di Modica, author of the famous bronze bull symbol of Wall Street In New York, died at 80 on the night of Friday to Saturday, the Italian media reported.

Di Modica, who died at his home in Vittoria near Ragusa, in southern Sicily, “had been battling cancer for years and his condition had worsened in recent weeks,” La Repubblica newspaper stated on its website.

The Sicilian sculptor is most famous for his imposing 3.2 ton (4.9 meters long and 3 meters high) bronze bull sculpture, installed near the New York Stock Exchange.. 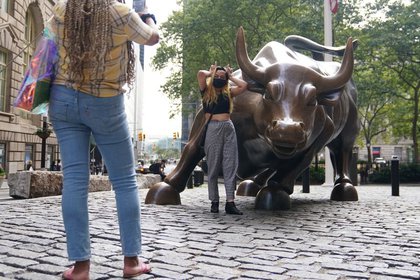 The bull of Wall Street, one of the most visited attractions by tourists (REUTERS / Carlo Allegri)

The story of the fighting bull is emblematic of Di Modica’s character, his idea of ​​beauty, his courage and his passion for provocation. “They were times of crisis, the New York Stock Exchange had lost more than twenty percent in one night and many people were plunged into the blackest depression,” he said years ago. With some friends I began to wonder what I could do for “my” city. Yes, of course, I’m from Vittoria, but if you live in New York for more than 40 years, you can’t help feeling it as yours too. So it occurred to me to sculpt a bull, the image of the growing Stock Exchange: it must be a joke, a provocation. And instead it became very serious. I have been told that after the Statue of Liberty, the Charging Bull in Bowling Green is the most visited monument in New York. It even surpassed the Empire State Building. “

Legend has it that scratching its snout, grabbing its horns or testicles brings good luck. 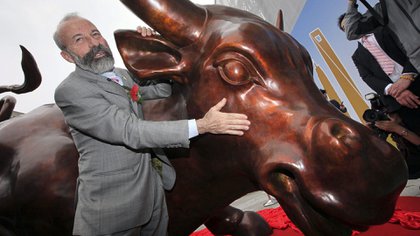 The sculpture was sculpted by the artist and financed out of his own pocket. Invested more than $ 350,000 at the time.

After a few weeks of true artistic guerilla, the bull was finally accepted by the city, which found its current location in 1989, north of Bowling Green Park, at the intersection of Broadway. 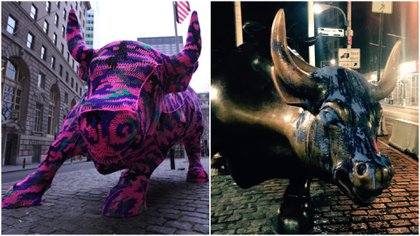 The sculpture was vandalized and intervened on several occasions (Archive)

In 2004, Di Modica announced that the sculpture was for sale because he had no money to pay for his trip to New York, on the condition that he did not move from his current location.

The author continued with the rights to the statue. In 2006, he sued Random House and other companies because they were profiting by violating copyright, selling replicas of the bull and using his image in publicity campaigns.

In 2019, “Charging Bull” was vandalized twice. On September 7, a Dallas man struck the sculpture with a banjo, leaving a considerable dent in one horn. Di Modica made a special trip the following month to repair his creation. On October 7, Extinction Rebellion activists threw fake blood on the sculpture and they represented a false death in the nearby square. 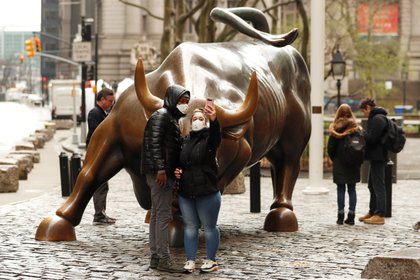 Proud to be the son of the baroque city of Ragusa, he wanted to give her a work that he had already designed but which will remain incomplete. He had imagined the Ippari Horses, two gigantic sculptures that he dreamed of placing on the Ippari River. To Lucio Luca, from Repubblica, he confessed a few days ago: “I have completed two eight-meter bronze horses that come together in an arc. I called them Battle Horses. It is a prototype that I am going to sell to finance the 40 meters that will be placed on the Ippari river, which borders Vittoria, my city. It is the gift I want to leave to my land ”.

“He had a park full of his sculptures in his house,” says Lucia Pasqualini, Italian consul in Guangzhou (China), but who had met Di Modica when she was a diplomat in New York. “He had seen the two horses that he dreamed of making for Vittoria as a tribute to his city. An imposing work. He had Sicily in his heart and was very proud of his Italian and Sicilian roots. That is why he wanted to do something great for his country. Give back what I had been able to get by going to the United States, “he added.

His friends describe him as “imaginative, brave, ambitious, generous, definitely a provocateur.”

120 years of Louis Kahn, the mystical and nomadic architect who devoted his life to eternal works The story behind the desperate motorcycle delivery man who set himself on fire in China