Home>Cryptocurrency>Should you keep buying Ripple (XRP) after a 100% surge?

The price of Ripple (XRP) has moved roughly 100% higher in recent days to break above the $ 1 mark for the first time in more than 3 years.

Ripple CEO Brad Garlinghouse said that Ripple could continue to trade without XRP if necessary. Garlinghouse argued that his company is ready to move forward without its XRP settlement platform if it loses the lawsuit against the US Securities and Exchange Commission (SEC), which claims that XRP is a security and not a currency.

“We could do that. We have always thought of our product as ‘How do we solve a customer’s problem in the first place?’ And I think that has served our growth. It’s one reason we’ve seen so much activity now, billions and billions of dollars in transactions on Ripplenet, our payment network, ”Garlinghouse said.

“The good news for Ripple is that we have signed more than 20 new financial institutions around the world as clients since the SEC filed its lawsuit and I think we will see the network grow very rapidly in clients outside the US.” He added. emphasizing that Ripple will continue to enter new partnerships around the world, regardless of its legal battle against the SEC.

Garlinghouse considers the lawsuit “ironic” given that it is based on assumptions that Ripple illegally sold XRP as an unregistered security. However, the SEC said that in the end, the court will have the final say on the status of XRP. Garlinghouse also said he hopes the SEC will review the lawsuit once Gary Gensler becomes the agency’s new chairman.

The price of XRP spiked higher on Monday due to growing optimism that Ripple may win its lawsuit against the SEC. Attorney Jeremy Hogan expressed his optimism on Twitter numerous times, which later translated into a strong and rapid move up for XRP.

(1/2) I am prepping for the SEC v. Ripple hearing and did a deep-dive into some docs, and LOOK WHAT I FOUND. It’s the SEC stating in a public document “… the digital CURRENCY company called Ripple Labs.” (top of pg.3) https://t.co/dFAtp8kiqa

The upward move in XRP began on Monday when price action exploded 43.7% in one of the biggest short contractions in the crypto world recently. The beleaguered digital asset then continued to trade volatile Tuesday before closing the day up 20%. 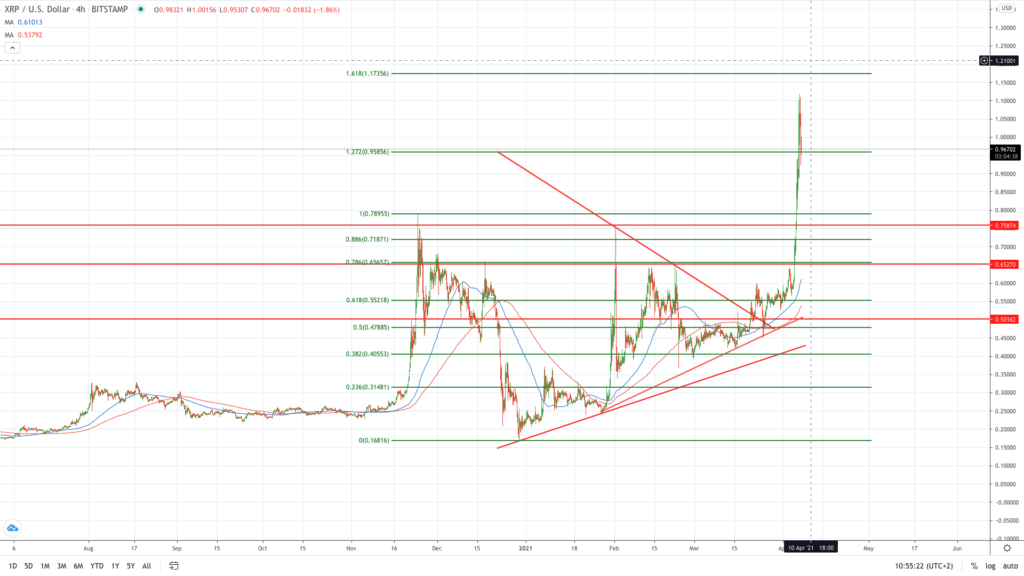 Yesterday’s high of $ 1.11 is the highest XRP price traded since February 2018. Price action is now pulling back in profit-taking to find support around the $ 0.95 mark. The next major upside target for Investors looking to buy XRP is the 161.8% Fibonacci extension line above the $ 1.17 mark, a move likely given the strong bullish momentum.

Ripple CEO Brad Garlinghouse said his company is ready to move forward regardless of the outcome of its legal battle against the SEC. Meanwhile, the price of XRP spiked around 100% due to growing optimism that Ripple is likely to win its lawsuit against the SEC.