We’re seven months into 2021, and let me tell you — we were ready to write the year off as an absolute train wreck. But the lovely folks at HBO Max decided to bless us with some pretty fabulous news. While rumors have always swirled about a Sex and the City reboot, the streaming service finally confirmed back in January that, yes, it’s officially happening.

Here’s everything that we know about the revival so far, including who’s confirmed to join the show (hello, Mr. Big !!), potential storylines, and when you can expect the episodes to hit your screens.

Who’s returning from the Sex and the City cast?

As of right now, Sarah Jessica Parker, Kristin Davis, and Cynthia Nixon are all set to return as Carrie Bradshaw, Charlotte York, and Miranda Hobbes respectively. The big (yet totally unsurprising) news? Kim Cattrall isn’t coming back. It’s no secret she and the rest of the SATC ladies have been in a not-so-lowkey feud over the years, so it’s not a huge shock. But still, such a bummer!

I will say, Kim’s quote to The Guardian in 2019 about her life priorities is truly queen shit. “Now I don’t want to be in a situation for even an hour where I’m not enjoying myself. I want to choose who I spend time with personally and professionally. It’s my life, ”she said. Iconic.

Kim also went into detail about why she wasn’t interested in returning to her character: “I went past the finish line playing Samantha Jones because I loved Sex and the City. It was a blessing in so many ways, but after the second movie, I’d had enough. I couldn’t understand why they wouldn’t just replace me with another actress instead of wasting time bullying. No means no. “

Will any of Carrie’s old flames be back?

Funny you should ask. Guys and gals, prepare yourself for the biggest news of all: MR. BIG IS BACK! That’s right, everyone. Chris Noth has just confirmed he’ll be joining our favorite fashionistas, and according to Deadline, he’s apparently been in talks to join the show for quite a while. One thing to consider: There’s no guarantee if he’s just making a surprise appearance or if he’ll be in all 10 episodes.

“I’m thrilled to be working with Chris again on And Just Like That,” said series executive producer Michael Patrick King to Deadline. “How could we ever do a new chapter of the Sex and the City story without our Mr. Big?”

As far as other Carrie flames, Mr. Big won’t be returning alone. In a recent interview with Page Six, a fan fave of the series announced he’s coming back for a few episodes. That’s right — John Corbett, aka our hunky furniture maker Aidan Shaw, is expected to be in a few episodes!

“I’m going to do the show,” he told the publication, but he didn’t give any further details on what his role will look like in the revival. “I think I might be in quite a few episodes. I like all those people, and they’ve been very nice to me. ”

What about the other leading men? Are they returning too?

Interesting question you bring up … As a matter of fact, we have a Cosmo of information to spill for you. Not only can we expect some character faves to be mentioned throughout the reboot, but yes, you’ll get the chance to see them on our screens again.

Case in point: Thanks to a report from Variety (and we TRULY appreciate it), we can now officially confirm that David Eigenberg (Steve Brady), Willie Garson (Stanford Blatch), Evan Handler (Larry Gldenblatt) and Mario Cantone (Anthony Marentino ) will all be returning to the SaTC world! 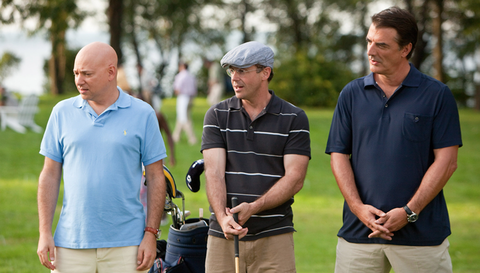 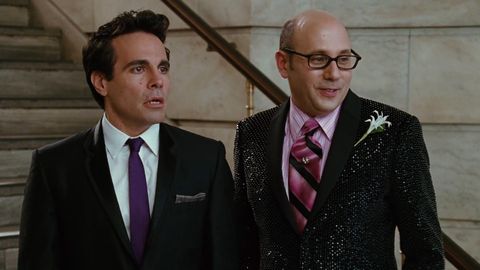 Honestly? All I can say is THANK GOD for this hidden gem of good news today. Because, really, if Carrie somehow gets to have both Mr. Big and Aidan in the show, it’s only fair that Miranda and Charlotte get their baby daddies on screen too. Are we right or are we right? There’s no point in arguing with us about it, because we know we’re right about this.

What about Carrie’s former enemies?

You would think that after all these years Carrie would be able to leave certain things behind, but these photos from the set prove even more people from her past might be making an appearance. Enter: Natasha. 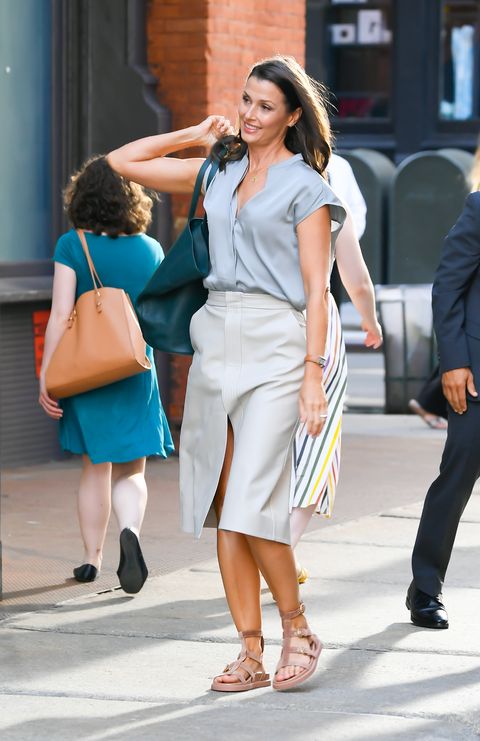 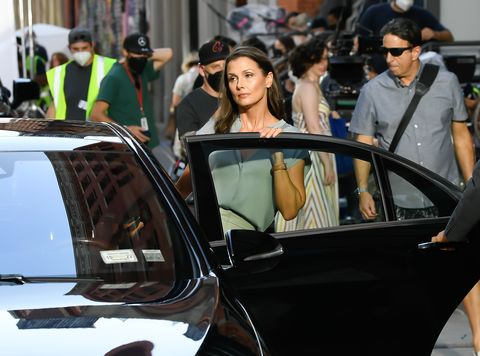 Yes, the one and only Bridget Moynahan was spotted on the set, which could mean so many different things. TBH, I always thought Natasha got a bad rep for basically no reason. It’s not her fault she married Big! I hope she and Carrie are friends now, or something. That’d be the greatest plot twist.

Any new characters joining the girls?

Yes, actually! Grey’s Anatomy alum Sara Ramírez recently announced they are joining the reboot, and between you and me? I truly hope she fills the Samantha-size void we’re all bound to feel at some point.

According to Deadline, Sara will play Che Diaz, a non-binary stand-up comedian whose podcast on which Carrie is a frequent guest. The publication called Che “a big presence with a big heart.”

How many episodes are we getting?

Have! It sounds like it’ll be one season with 10 episodes, each running at half an hour. It looks like it’s going to be called And Just Like That…, which is a little bit confusing because they could just call it Sex and the City, but whatever. I plan on watching every single episode in one five-hour sitting. It will follow the women as they “navigate love and friendship in their 50s,” according to Variety.

Do we have a teaser trailer?

Kinda! Here’s what the cast promoted on social to announce the revival:

Cynthia Nixon running for governor of New York and then returning to the SATC universe within three years… more queen shit.

When is the Sex and the City revival premiering?

Okay, yes, that’s the big Q. Per Variety, the show is set to go into production in late spring in New York City, assuming things are possible COVID-19-wise. That means episodes probably won’t be available / finished until late next year at the earliest, unless they really rush it. So you might have to wait until 2022. That’s a very long time! But it’ll probably be very, very worth it.

Cosmopolitan will update this story as more information becomes available.

Emma Baty Emma Baty is the Associate Entertainment Editor at Cosmopolitan who focuses on movies and TV.