Sevilla recovered sensations after their unexpected defeat against Borussia Dortmund in the Champions League in Haaland’s exhibition at the Sánchez-Pizjuán with a win against Osasuna that places them third in the League and increasing their winning streak in the championship, five consecutive and also without conceding a single goal. The goals of Diego Carlos and De Jong put those of Lopetegui in orbit, surpassing Barça in the table, with whom they will play in two consecutive games in four days, the League and the second leg of the semifinals in the Cup, with an advantage of 2- 0 of the Andalusians.

The first scare, however, was given by the Navarrese team, because in a lateral center by Rubén García Oier he surprised the Sevilla defense and connected a header that crashed the ball into the left post of the goal defended by Bono, who could not have been do nothing of having directed it slightly more to the right. 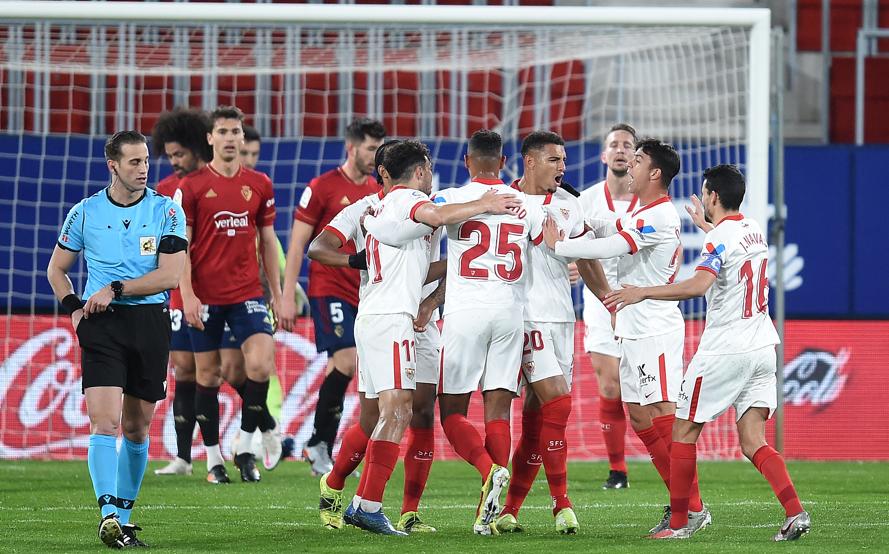 Lopetegui had made four changes to his eleven to refresh his team after Wednesday’s effort in the Champions League. They entered the fray Rekik, Óliver Torres, Munir and De Jong for Escudero, Rakitic, ‘Papu’ Gómez and En-Nesyri seeking to maintain the hegemony in possession of the ball and reach the rival goal quickly against a team with problems. However, the Andalusians found themselves with strong pressure at the top and a whirlwind exit from those of Jagoba Arrasate, although gradually, after that header to the wood of Oier, they fell back from the higher quality of the Nervionenses, who went ahead in a Strategy move when Diego Carlos finished off a corner taken by Joan Jordán.

With the score in favor, it was easier for the whites to control the game times, which he sentenced in the first moments of the second period, when Fernando stole a ball in the center of the field and mounted a counterattack that culminated at the near post De Jong after the gallop and Munir’s measured cross from the left.

With 2-0, Osasuna kept trying, but Sevilla, physical and knowing how to be, made it practically impossible. Those of Lopetegui did not grant any chance and were even able to extend their advantage in an action by ‘Papu’ Gómez, who came out in the second half, which Herrera ruined.