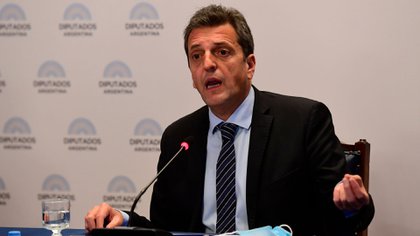 Sergio Massa, president of the Chamber of Deputies (Maximiliano Luna)

The president of the Chamber of Deputies, Sergio Massa, said today that they will seek “in the next few days” to achieve the reduction of the Income Tax, after the president Alberto Fernandez sign the Decree for their treatment in extraordinary sessions.

“The debate must be speeded up because there are more than a million Argentines who are waiting for the tax relief that the measure represents,” said the former mayor of Tigre. And he added: “All consensus will be sought with the unions, the AFIP, the Ministry of Economy and the opposition to achieve the reduction of the Income Tax in the coming days.”

The bill promoted by Massa himself sets a new floor of 150 thousand pesos of monthly remuneration to start paying the income tax and would benefit 63.4 percent of the taxpayers who currently pay it throughout the country.

“We have to seek to resolve this measure in the best way and then address the other situations that other sectors expect with respect to a fairer tax system,” said the president of the Chamber of Deputies on the bill that bears his signature.

“The regressive tax system is absurd,” Massa continued. With 56 thousand pesos you are poor and with 72 thousand you pay profits “, and expanded:” We must correct the distortion that occurred between 2016 and 2019 and that led to twice as many workers being paid today than in 2015 tax for working ”.

The objective of the ruling party is for the initiative to be approved during the first fortnight of March, in an extraordinary session. Together for Change He already anticipated that he will vote in favor of the Government’s project, although they could request some modifications.

As well has the support of the bulk of trade unionism, heading for wage negotiations by sector and needs to give positive signals to workers in terms of achievements for your income. However, there are qualms and demands. As . published, in recent days the Truckers’ union asked that the Christmas bonus, travel expenses, overtime, food payment in activities such as transport, oil, aeronautical and maritime activities be exempted from the tax.

According to estimates from the Frente de Todos bench, if the initiative presented by Massa is approved 1,267,000 people will benefit. The project also includes discounts for workers who earn between $ 150,000 and $ 173,000.

After the automatic increase of the non-Taxable minimum of January, They pay Earnings in Argentina around 2,000,000, almost 25.6% of workers in activity. If the new scheme proposed by the ruling party is sanctioned, that percentage would drop to 10%, the historical level of taxpayers included in this tax until 2009.

“This project aims to alleviate the fiscal burden of workers, retirees and retirees within the framework of a permanent policy of this Government to implement countercyclical measures that are conducive to strengthening the purchasing power of taxpayers and taxpayers. of their families and, with it, the consolidation of the demand and the national internal market ”, the text of the project raises in its foundations.

“In a complementary manner, 102,741 male and female workers, retired men and women with salaries of between PESOS ONE HUNDRED FIFTY THOUSAND ($ 150,000) and PESOS ONE HUNDRED AND SEVENTY-THREE THOUSAND ($ 173,000) will enjoy an additional increase in their deductions to avoid sudden jumps in the tax scale. Additionally, this reasonable average of male and female employees, retirees and retirees who would remain paying the tax respects the concept of progressivity ”, it was specified.

Sergio Massa: “The Earnings reform is a salary recovery for a million workers”

Income Tax: everything you need to know about the official project to exempt those who earn less than $ 150,000

Income Tax: everything you need to know about the official project to exempt those who earn less than $ 150,000