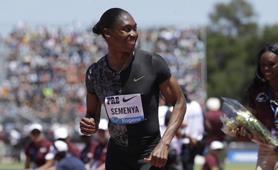 Caster Semenya’s lawyer said Tuesday that they will take his case to the European Court of Human Rights, in an apparent desperate last legal resort against the regulation that requires the South African athlete and other women to artificially lower their testosterone levels to compete.

Gregg Nott, who has represented Semenya for more than a decade, did not give any date to file the case in the Strasbourg, France-based court, but it is unlikely to be resolved before the Tokyo Olympics next summer.

Semenya, a two-time Olympic champion in the 800 meters, has lost two legal battles against the testosterone limits imposed by World Athletics (the international athletics federation).

The regulation requires that women with high testosterone levels try to reduce them with birth control pills, injections to block hormones, or with surgery. The rule applies to track events between 400 meters and one mile.

World Athletics argues that high testosterone levels give Semenya and other athletes an unfair advantage.

Semenya, 29, has refused to take medication to alter what she calls natural and has been unable to compete since last June. He says he will try to compete in the 200 meters at Tokyo 2020.

In the statement, Nott said there is “growing support” for Semenya “from institutions and organizations around the world.” She indicated that the South African Human Rights Commission expressed its support following the announcement last year by the UN Human Rights Council of support for the athlete.