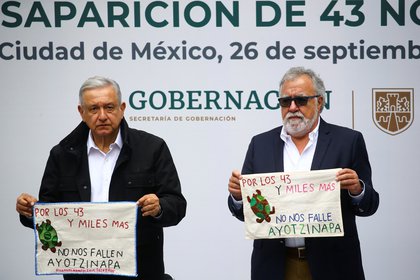 Mexico’s President Andres Manuel Lopez Obrador and Mexico’s Undersecretary of Human Rights Alejandro Encinas hold pieces of fabric embroidered by relatives of the 43 missing students of the Ayotzinapa Teacher Training College, as they attend the delivery of an investigation report with marking the 6th anniversary of their disappearance , at the National Palace in Mexico City, Mexico September 26, 2020. REUTERS / Edgard Garrido

The Legal Counsel of the Ministry of the Interior (Segob) presented this Friday, January 22, a criminal complaint before the Attorney General’s Office (FGR) for the “leak” of the case file of the disappearance of the 43 young students of the School Normal Rural “Raúl Isidro Burgos”, better known as Ayotzinapa.

This was announced on Saturday afternoon through his social networks, Alejandro Encinas, undersecretary of Human Rights, Population and Migration of Segob, demanded that the public servants who leaked the testimony of a protected witness identified as “Juan”, who affirmed that the 43 young people were disappeared by the military, the Guerrero state police and members of organized crime.

In the complaint, the Ministry asks the FGR, headed by Alejandro Gertz Manero, to carry out all the necessary steps to collect the evidence that is necessary for the correct integration of the investigation that is followed, as well as to “prosecute the that the perpetrators and / or participants in the events, with the appearance of a crime, are reported. 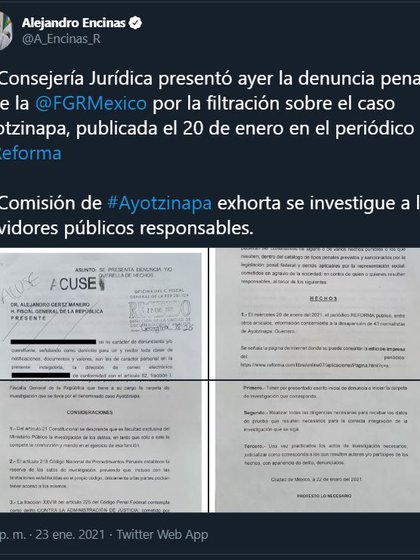 “It is the responsibility of the Public Ministry to define the authorship and participation of those involved,” reads the complaint filed.

In a first leak, on January 20, the newspaper Reforma published that on the night of September 26 and 27, 2014 in Iguala, Guerrero, a group of students was detained by the military and interrogated in the 27th Infantry Battalion to find out if they belonged to a rival criminal group.

Later, they were handed over to members of organized crime for their disappearance.

President Andrés Manuel López Obrador confirmed in his morning press conference on January 21 the veracity of the leaked information and said that the investigation is open. 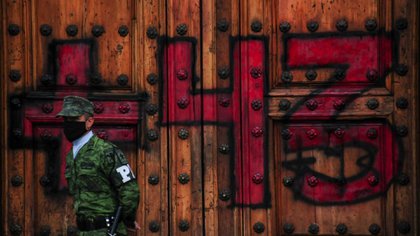 It is not apocryphal. There is already an arrest of an Army captain. The investigation is open and is not yet complete. Everything indicates that the version that was spread from the beginning is not real

In a second leak, based on the testimony of “Juan”, it was published that the current Secretary of Security of Mexico City, Omar García Harfuch, who in 2014 worked as Regional Security Coordinator of the Federal Police (PF) in Guerrero, allegedly received $ 200,000 a month in exchange for information on possible operations and to provide facilities for the transfer of heroin, money and weapons.

However, that same day García Harfuch rejected the allegations in an interview with W Radio, arguing that the person who said it was a member of a criminal group. 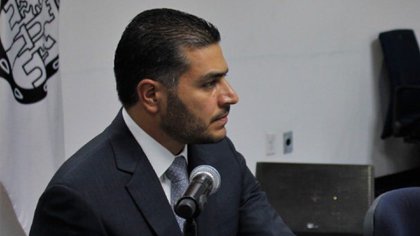 I categorically deny any link, today and six or seven years ago , with any criminal organization. What we have worked on since I started in the Federal Police and later in the Attorney General’s Office to date, I think the results speak for themselves […] From what I read in the note from & nbsp; Reforma & nbsp; he is a criminal who becomes a protected witness, he is a criminal who is part of this group & nbsp;[…] We knew who the heads of the criminal groups were, six or seven years ago

Journalist Anabel Hernández indicated in September 2020 that García Harfuch played a key role in the disappearance of the 43 students from Ayotzinapa. “Before and after Ayotzinapa, he was solely and totally responsible for what the Federal Police did or did not do in Guerrero”.