For the second consecutive night, Spain registers in its main cities protests against the imprisonment of Pablo Hasél, the Catalan rapper arrested on Tuesday morning for tweeting against the monarchy and the security forces. The largest concentrations take place in Madrid and Barcelona, ​​where new incidents were recorded between protesters and the police.

Hundreds of people gathered in the center of Madrid to demand the release of Hasél, arrested in Lleida to serve the sentence imposed by the National Court for a crime of glorifying terrorism and insults and slander after spreading threatening messages on social networks. 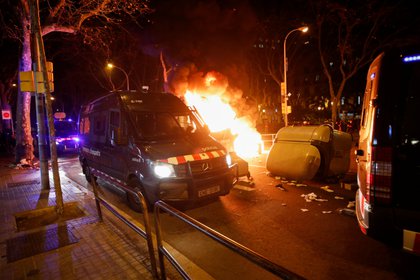 Police vehicles while the fire burns during the protest in Barcelona, ​​Spain, this February 17, 2021. REUTERS / Albert Gea

The act of protest in Madrid, which does not have authorization from the Government Delegation, started at around 7:00 p.m. at Puerta del Sol under strong police force after the altercations registered in Tuesday’s calls in various parts of Catalonia such as Barcelona, Lleida, Girona, Vic (Barcelona) and Reus (Tarragona), as well as in the city of Valencia.

With banners on which the motto could be read ‘Kidnapped by the State Everyone to the streets! Let’s conquer their freedom! ‘ or ‘Pablo Hasél, Freedom. Out with Franco’s Justice ‘The concentration began with a festive atmosphere under chants to demand the release of the Catalan rapper from prison.

At one point, masked protesters threw bottles at the riot police, who in turn charged them. 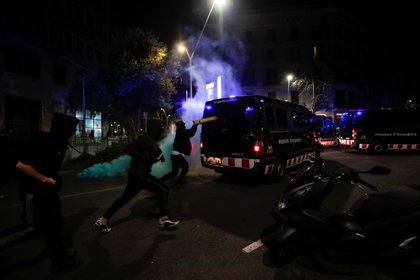 A protester tries to hit a police vehicle in Barcelona, ​​Catalonia, this February 17, 2021. REUTERS / Albert Gea

In Barcelona, where on Tuesday night the protests led to strong clashes with the police, altercations were recorded again, with people throwing objects at the agents and barricaded with litter bins set on fire.

Before these events, in the protest of hundreds of people in the Catalan city shouts of “Libertad Pablo Hasél” were heard, while other people rapped with microphones and speakers. 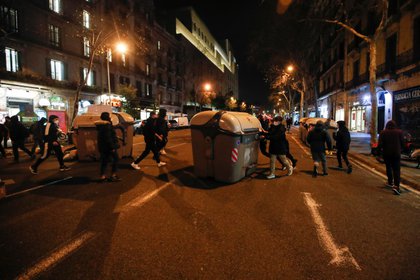 People move garbage containers to build a barricade during the protest against the arrest of Catalan rapper Pablo Hasel in Barcelona on February 17, 2021. REUTERS / Albert Gea

‘Freedom, Pablo Hasél’, the congregation insistently chanted in front of the headquarters of the Government of the Community of Madrid, most of them wearing masks due to COVID-19 but not always keeping the recommended safety distance. ‘Here are the anti-fascists’, ‘Madrid will be the tomb of fascism’ or ‘The struggle continues, whatever the cost’, have been other songs that have been repeated the most.

Banners like ‘Enough of censorship’ or ‘No to the gag law’ ‘Censorship = Tyranny’ and drawings of faces with their mouths covered with a cross have flooded a Puerta de Sol surrounded by vans of the National Police, troops who The congregation has challenged with shouts of ‘police out of our streets’ or ‘Nazi by day, Police by night’. 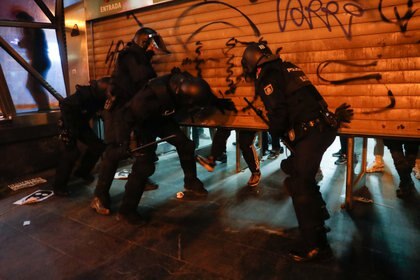 Police officers confront protesters who were hiding behind the door of a metro station in the Plaza de la Puerta del Sol in Madrid, Spain, February 17, 2021. REUTERS / Susana Vera

On Tuesday several demonstrations in various Catalan cities, in which thousands of people participated, ended in riots that resulted in 15 arrests and 33 wounded, 17 of them Catalan police officers.

Hasél was detained Tuesday at a university in Lleida, his hometown, where he had barricaded himself with supporters to avoid arrest.

The rapper began serving a nine-month jail sentence for tweets against the monarchy and the security forces. 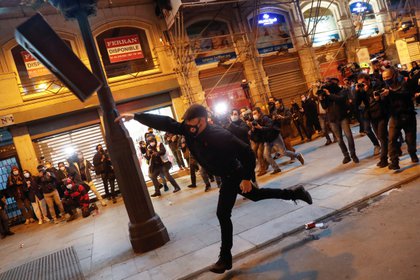 A protester throws a trash can during the riots in Madrid, Spain, on the night of February 17, 2021. REUTERS / Susana Vera

Hasél’s case generated a strong debate about freedom of expression in Spain.

In addition, it caused discomfort in the left-wing coalition in power, chaired by the socialist Pedro Sánchez, who promised to review the penal code so that these types of crimes are not punished with prison sentences.

His minority partner, the radical left Podemos, advanced on Tuesday that he would request a pardon for the rapper, who has received the support of celebrities in the country such as the filmmaker Pedro Almodóvar, the actor Javier Bardem or the singer Joan Manuel Serrat. 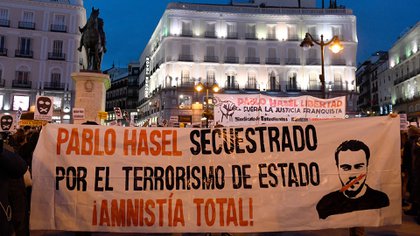 A group of people holds a banner that reads “Pablo Hasel kidnapped by State terrorism. General amnesty” in Madrid on February 17, 2021 (PIERRE-PHILIPPE MARCOU / .)

Arrested and injured in protests over the arrest of Pablo Hasél, the rapper convicted of tweeting against the monarchy