I am truly sorry to break this news to you, but Scott Disick is once again in a serious relationship with someone a decade younger than he is! Two months after breaking things off with Sofia Richie, Scott was spotted hanging out with Lisa Rinna’s 19-year-old daughter, Amelia Hamlin, at a 2020 Halloween party. Somehow, a whole five months have passed (truly what is time anymore ???) and Scott and Amelia are still going strong… and swiftly approaching the “living together” phase of their relationship.

With a potential move on the horizon, it’s time for us to figure out what is up with Scott dating very young adults everything there is to know about Scott and Amelia’s relationship with a handy-dandy timeline. Good luck not getting yourself invested in this’ ship!

Another major relationship milestone! Lisa reveals that Scott has actually met Amelia’s dad during a recent episode of Watch What Happens Live With Andy Cohen. “Very similar to what you thought when you met him, he’s more handsome in person,” she tells Andy. “We had a very nice time. He met [my husband and Amelia’s dad] Harry [Hamlin]. “She isn’t too thrilled about her daughter dating Scott, though — Lisa adds the relationship” is what it is, guys. It is what it is. “😅

Amelia already has a nickname for Scott’s daughter, Penelope — Peesh! Scott posts an adorable pic of Penelope riding shotgun and Amelia comments with her endearing name of Penelope.

Wondering how Amelia feels about Scott’s relationship with Kourtney Kardashian? “Amelia’s not bothered by Kourtney,” a source tells Us Weekly. “Scott and Amelia have been enjoying spending a lot of time together and hanging out with their friends. Their relationship has been heating up and you can totally tell they’re serious. ” A stark contrast to how Scott’s ex Sofia Richie felt about Kourt!

And just to make sure the people in the back one hundred percent get it, the source adds that Scott doesn’t give a damn about his and Amelia’s age difference: “Scott’s dated Sofia, so age isn’t really an issue for him. Despite their age difference, they have more in common than people would think.… He sees himself as being younger than he is. Amelia is really mature and acts older than she is, so they get along pretty well. ” Uh… cool!

Things are getting real serious between Scott and Amelia because reports claim they’re planning on taking the next step in their relationship: moving in together.

Scott’s planning to move to Miami temporarily for a change of scenery [and] pace and he will split his time between there and LA so he can see his kids and the rest of the family, ”a source tells Entertainment Tonight.

Another source tells ET that “Amelia is planning on moving in with him. Scott was lonely when he and Sofia [Richie] broke up, which is one of the reasons he and Amelia got together so quickly. They’ve been getting a bit more serious for now. Scott has been having a good time with Amelia. “

Scott and Amelia are completely unbothered by people’s feelings about their age difference — and good for them! A source tells People that Amelia “grew up in the industry and knows how all this works,” and “it’s a different type of maturity, and they really don’t feel the age difference.” Scott, meanwhile, has been “telling friends how much she means to him and how into her he is.”

Amelia is fully out here posting pics of her and Scott together to her Instagram Stories, calling Scott her “dream man.” 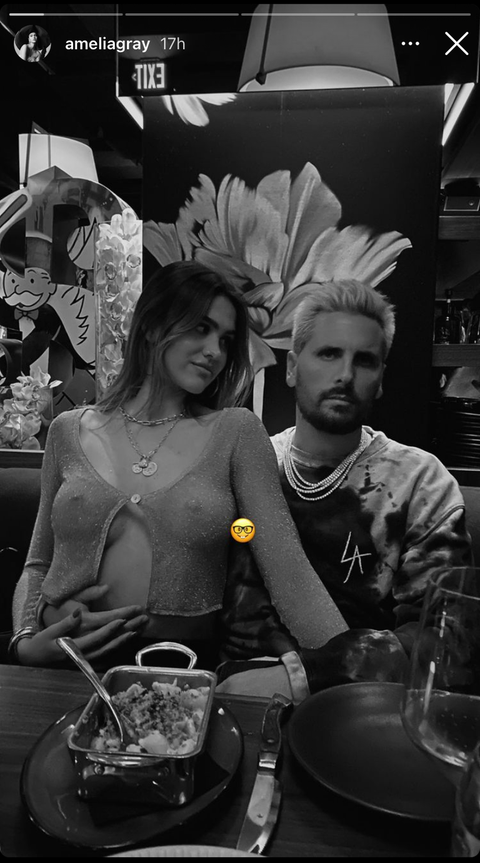 In a unique move that has totally never been done before, Scott posts pics of him and Amelia enjoying dinner on Valentine’s Day. In all honesty, it’s v cute. 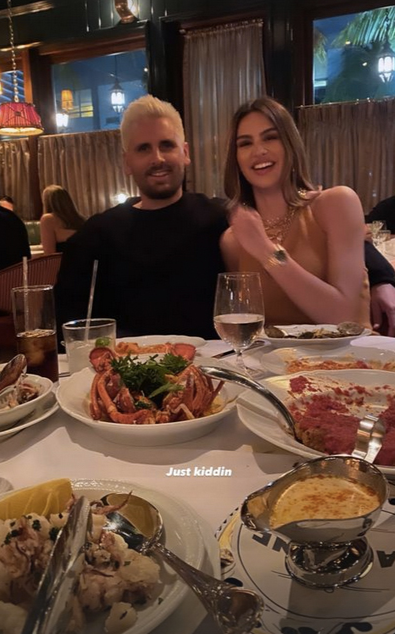 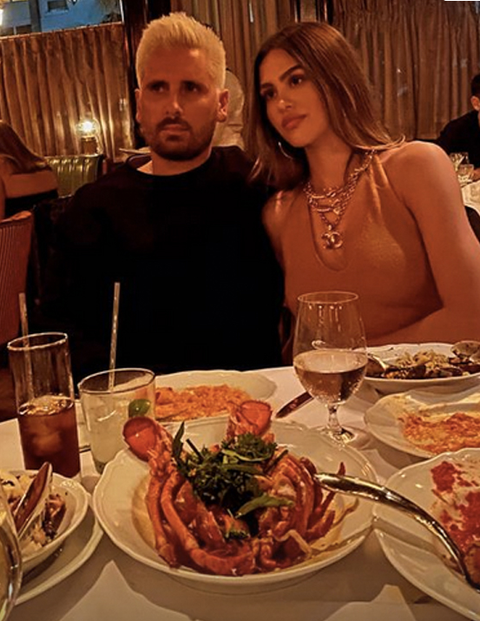 Oh, and they casually enjoy some maskless beach time on this day too: 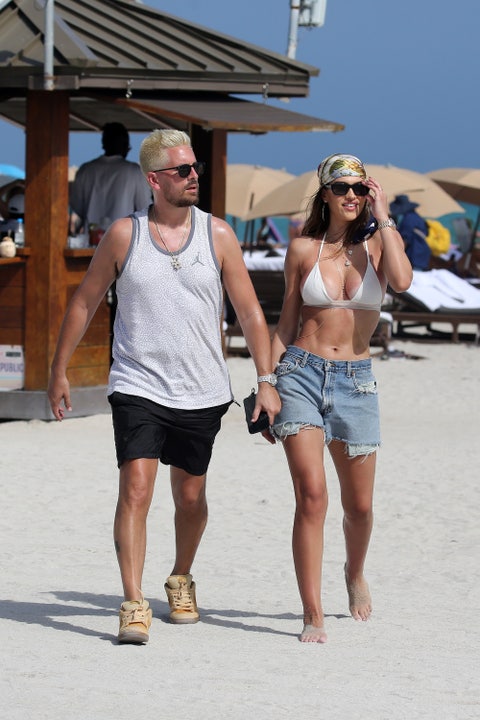 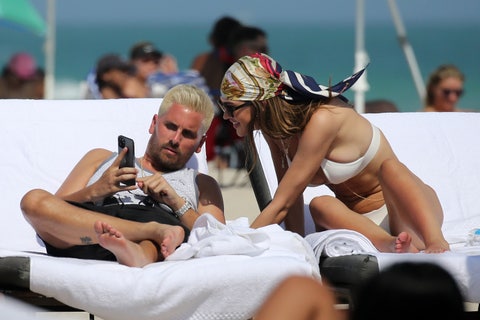 Amelia is not here for any judgment of her life choices, so she airs out her frustrations in a post to her Instagram Stories (which a fan account captures). She writes, “Ppl r extra weird and judgmental these days… people can embrace themselves however they feel fit for them at that moment in time. People grow. People learn to love themselves more and more. “

Amelia and Scott go Instagram official! Well, kinda. Amelia posts a picture of her and Scott on Thanksgiving to her Stories, captioning it “thankful 4 these ppl” in all caps. 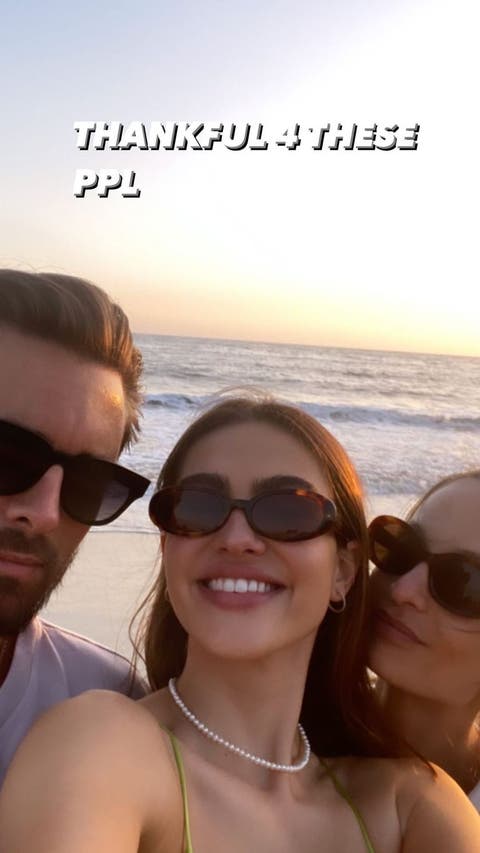 With all this talk happening over Scott and Amelia’s relationship, peeps OF COURSE wanna know how Scott’s ex and mother of his three children, Kourtney Kardashian, is feeling about this. Spoiler alert: Kourt doesn’t really give a damn as long as he’s being a good dad to their kids.

TMZ sources say Kourt has “no issue” with Scott and Amelia’s relationship because he’s still giving their children — Mason, Penelope, and Reign Disick — adequate attention. TMZ’s insiders claim Kourt might actually * prefer * when Scott is seeing someone because “that’s when he’s the most grounded, happy, and responsible as a parent. That’s how the family saw him when he was dating Sofia, and it’s the same way now that Amelia’s in his life. ” Nothing to see here, y’all!

Amelia’s mom — the iconic Lisa Rinna — is… concerned about Amelia dating Scott, likely because of their 18-year age gap. A source who is allegedly close to the family tells The Sun that Lisa is “worried” for Amelia but won’t go as far as speaking about their relationship.

“Lisa isn’t going to acknowledge this publicly for now because she’s still trying to wrap her head around it and thinks this is a phase. But when she does speak about it, she’ll keep her cool, but really, she’s worried. That’s her youngest kid. “

The source continues, “She really does like Scott but both her and Harry don’t want someone that age with so much baggage to be with their baby girl, especially given Amelia’s own mental health issues.” 😬😬😬

And we have even more parental intel from Amelia’s folks. This time, it’s worse — Lisa and her husband, Harry Hamlin, apparently “believe this is just a phase,” according to an E! News source. They’re still in denial that Amelia is no longer with her ex Mercer Wiederhorn and lowkey want them to get back together. “Harry and Lisa were sad to see Amelia and Mercer Wiederhorn split because they loved Mercer. He was like family, but they understand, ”the source adds.

As for Scott? Yeah, he’s pretty much enjoying the roller coaster that is life at this point. The source claims, “Scott’s having a good time. He’s getting to know Amelia and enjoying her company. They are spending a lot of time together but it’s nothing serious. He’s having fun with it. “

Scott and Amelia are spotted grabbing dinner together, and both post identical pictures of the food and plates, which of course gets the internet talking about whether they’re ~ a thing ~ or not.

This is how it all starts: Amelia and Scott are reportedly seen attending a Halloween party together, although there mysteriously isn’t a lick of photo evidence!

You love all the deets on celebs. So do we! Let’s overanalyze them together.