In biology, the term chimera refers to those animals generated by mixing embryonic cells of two different individuals, of the same or different species. In recent years, the formation of interspecies chimeras has been a promising strategy for various applications of regenerative medicine, including the generation of organs and tissues for transplants.

Now scientists from China and the US have injected human stem cells in primate embryos and have been able to cultivate these chimeric embryos for a considerable period of time: up to 20 days. The work, published in the journal Cell, has implications for the development of new models of human biology and disease.

“This type of research is important to develop knowledge about cellular communication and biological development during embryogenesis and evolution, as well as for a variety of research applications and regenerative medicine,” Juan Carlos Izpisúa Belmonte, a researcher at the Institute, explains to SINC. Salk of Biological Sciences and lead author of the study.

These studies could lead to the possibility of growing replacement human tissues, such as those of the heart and kidneys. Also test candidate drugs for human diseases with more precision than animal models, or understand aging

The Spanish specialist emphasizes the importance of this type of study: “As we cannot carry out certain types of experiments in humans, it is essential that we have better models to study and understand human diseases with greater precision in in vivo conditions.”

“For example, it could one day lead to the possibility of growing replacement human tissues, such as those of the heart and kidneys. It also helps to test candidate drugs for human diseases with more precision than traditional animal models, or to understand processes such as aging, the main risk factor for Alzheimer’s, heart disease or cancer ”, he adds.

In order to Josep M. Canals, an expert in stem cells and regenerative medicine from the University of Barcelona (UBNeuro) who has not participated in the Izpisúa study, “the model used of human-monkey chimeras shows differences in the early stages of development between these two species. This type of approach opens up a fascinating field of research that can explain the differences and specificities of the beginning of human development ”.

But, despite their relevance, “these models will rarely provide therapeutic solutions through transplantation of organs developed by these chimeras, although the authors point to this possibility,” points out SINC Canals.

The breakthrough that made the current study possible came in 2019, when Izpisúa Belmonte’s team – in collaboration with Weizhi Ji, from Kunming University of Science and Technology, in Yunnan (China), also the author of the new work— generated a technology that allowed macaque embryos to remain alive and grow outside the body for a prolonged period of time, but that “ it did not include chimeras, that is, cells of more than one species ”, emphasizes the Spanish researcher.

However, in the current study, each of the monkey embryos (which were in the blastocyst phase, that is, with six days of development) 25 human cells. The cells were derived from an induced pluripotent cell line known as extended pluripotent stem cells, which have the potential to contribute to both embryonic and extra-embryonic tissues.

After one day, human cells were detected in 132 embryos. At 10 days, 103 of the chimeric embryos were still developing. Survival soon began to decline and, on the 19th, only three chimeras were still alive. However, the authors note that the percentage of human cells in the embryos remained high throughout the time they continued to grow.

Each of the monkey embryos was injected with 25 human cells. After one day, human cells were detected in 132 embryos. At 10 days, 103 of the chimeric embryos were still developing. On the 19th, only three chimeras were still alive

“Historically, the generation of chimeras between humans and animals has endured a low efficiency and integration of human cells in the host species ”, states Izpisúa Belmonte.

“Creating a chimera between a human and a non-human primate – a species more closely related to us than all previously used species, such as the mouse or the pig – will provide the best understanding of whether there are evolutionary barriers to generation of these chimeras and if there is any means to overcome them ”, he continues.

However, it must be taken into account that “all the experiments in this article have been carried out in the laboratory and no implantation has been carried out in animals for tissue or organ development beyond the first embryonic stages. Therefore, it is not known if this would be scientifically possible and if these chimeras could develop to more complex stages ”, clarifies Canals.

Of course, he insists, “the differences that are shown on a cellular scale between the two species suggest that a development to later stages would not be viable. And the implantation of these pre-embryos in uterus that nowadays the legislation does not allow, would have very relevant ethical-scientific considerations ”. 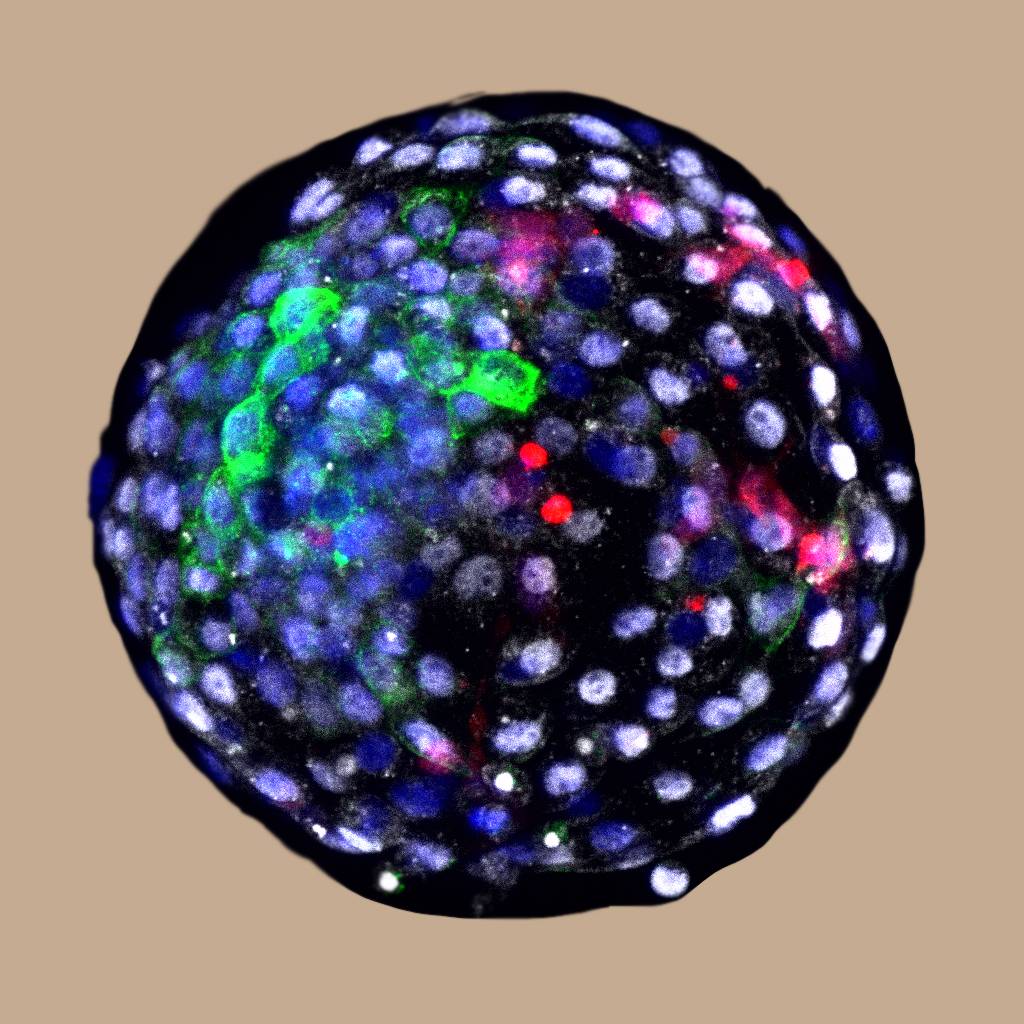 The ethical dilemmas of this technique

In addition to these purely technical concepts, this work is not without its ethical issues. In a related article, also published in the journal Cell, possible considerations regarding the generation of chimeras from human and non-human primates are discussed.

“Medicine needs better models to understand human biology and disease and to conduct experiments on them that would be ethically problematic in humans,” the authors say. “But as we develop new living models that are closer to humans, we get closer to the same ethical problems that we try to avoid.”

In addition to technical problems, this work is not without ethical dilemmas. In a related article, also published in Cell, possible considerations regarding the generation of chimeras from human and non-human primates are discussed.

According to Canals, “as in all work carried out with human pluripotent stem cells, ethical considerations are determined by their potential to generate a human being when it develops in the context of gestation within the uterus of a woman.”

“In this article they go one step further, mixing human cells with monkey pre-embryos. But in no case are these pre-embryos implanted in the uterus of pregnant monkeys to take development beyond pure laboratory research: the studies are limited to the field of research ”, he specifies.

Of course, it must be taken into account that this is the first article that shows the possibility of making human-monkey chimeras and, therefore, opens the door to possible studies that go further in the development of chimeras in countries where controls research ethics are not so strict.

“If implantation studies of these chimeras are carried out in pregnant uteruses, the ethical complications would be very serious due to the generation of possible new primate species that could have unexpected and uncontrollable consequences”, predicts Canals.

People are concerned about chimera research, which is understandable. It is our responsibility as scientists to follow all current ethical, legal and social standards. All our work is always governed by these guidelines and will be reviewed by the relevant committees.

Izpisúa Belmonte defends his work in this way: “Before starting consultations and ethical reviews were carried out both at the institutional level and through outreach to unaffiliated bioethicists with experience in state and national policies in this area of ​​research. This process helped guide our experiments, which focused entirely on ex vivo chimeric embryos. “

“People are concerned about chimera research, which is understandable. It is our responsibility as scientists to work reflectively, following all current ethical, legal and social standards. All of our work is always governed by these guidelines and will be subject to the review and approval of all relevant committees”, He concludes.

Chimeras between species since 1970

Interspecific chimeras in mammals have been made since the 1970s, when they were generated in rodents and were used to study early developmental processes.

In 2017, Izpisúa Belmonte’s team created chimeric embryos between human and pig with stem cells from human beings, which was a first step for the incubation of human organs in animals with the aim of using them in transplants and regenerative medicine. Previously, the same experts developed a mouse with rat organs.