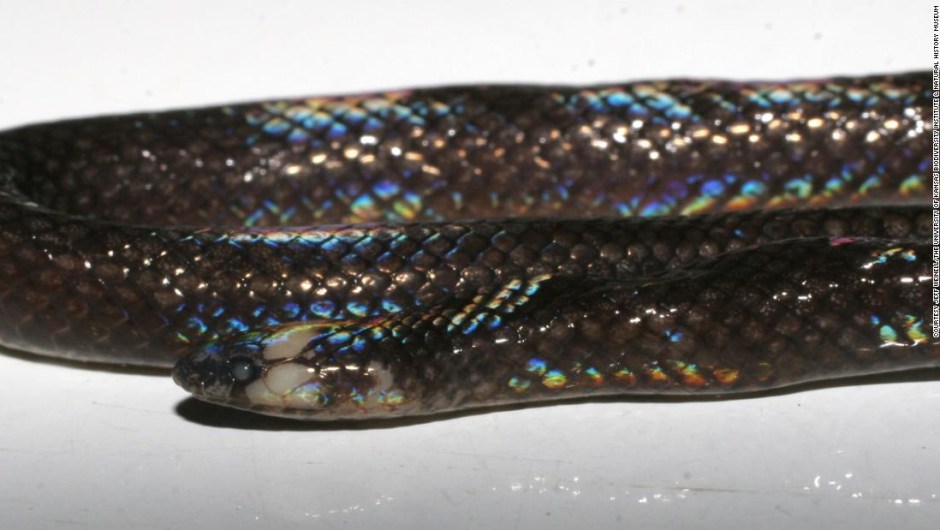 The recently identified Levitonius mirus, also known as Waray’s dwarf burrowing snake, is native to the islands of Samar and Leyte in the Philippines, an archipelago of exceptional biodiversity that includes at least 112 species of land snakes.

(CNN) – Sometimes looking at things we thought we knew with new eyes (and new tools) can lead to incredible discoveries. That’s what happened when Jeff Weinell, a graduate research assistant at the University of Kansas Biodiversity Institute, discovered that three snake specimens preserved in the institute’s biodiversity collection, found on field missions between 2006 and 2012 and overlooked until now, they belonged in a category of their own.

The findings by Weinell and his colleagues, based on methods including DNA analysis and CT scans that look at the bone structure of snakes, were published Wednesday in the peer-reviewed journal Copeia.

The newly identified Levitonius mirus, also known as Waray’s dwarf burrowing snake, is native to the islands of Samar and Leyte in the Philippines, an archipelago of exceptional biodiversity that includes at least 112 species of land snakes, according to the study.

The snake has the fewest vertebrae of any snake species in the world, according to the study, and has a long, narrow skull for its size, Weinell explained in a conversation with CNN. Their scales are very iridescent and their diet is likely based on earthworms.

Weinell stressed the importance of collaboration between American scientists and Philippine scientists, which fosters understanding of biodiversity in the region.

Originally, Weinell was interested in learning more about a group of snakes called the Pseudorabdion.

“I sequenced the DNA of a bunch of specimens from that group, and it was wrongly identified as belonging to (Pseudorabdion),” Weinell told CNN.

“When I got the DNA results, at first I thought it was just a mistake on my part, or contamination of the samples,” Weinell explained.

Closer analysis of the snakes’ scales and CT scans illuminating their bone structure revealed that Weinell had stumbled upon something new.

The snake is described as a “miniaturized” genus and species, much smaller than its closest relatives, Weinell said. While the Levitonius mirus is at most 17 centimeters long, “about the size of a pencil,” he noted, “the closest relatives could be three to four times as large.”

“That has a lot of consequences, like reducing the number of bones, a kind of simplification of the body,” Weinell said.

“Miniaturization has not been observed as often, at least in snakes,” said the KU graduate research assistant, and this snake represents one of the most extreme cases within the largest clade to which it belongs, called Elapoidea. That clade also includes larger venomous snakes like cobras and mambas. Weinell said Levitonius mirus is unlikely to be poisonous.

The three specimens that were examined in the study are the only ones known to have been found, and the snake has never been photographed alive, Weinell told CNN.

He tried to achieve that in 2017, traveling to the Philippines, but his expedition was unsuccessful.

“There’s still good habitat there for them to be there, but they live underground, so it’s hard to find them unless you have the perfect conditions to bring them to the surface,” Weinell explained.

A new genre too

The findings extend beyond one species, to an entire genus of snakes.

«We describe the snake not only as a new species, but as a new genus because it is morphologically very different from its closest relative, the Oxyrhabdium, and because the amount of genetic divergence between Levitonius and Oxyrhabdium is as high as usual observe between different genders, ”Weinell explained.

Weinell anticipates that more species of the genus will eventually be found in the Philippines, although the fact that these snakes have adapted to life underground could complicate the task for scientists.

For Weinell a particularly interesting aspect of this study was the ability to name a new genus and a new species.

The common name of the snake honors the Waray-waray people who inhabit the area where the specimens were found. The scientific name, Levitonius mirus, honors Alan Leviton, a California Academy of Sciences researcher who spent decades studying snakes in the Philippines, and continues to do so to this day.

“He doesn’t know, so this will be a surprise,” Weinell said, speaking before the findings were released.

The word mirus, Latin for “extraordinary,” speaks of the nature of Weinell’s discovery.

The importance of biodiversity collections

The fact that scientists could identify a new genus and species of snake based on specimens in a collection speaks to the importance of maintaining repositories of biodiversity in research institutions and universities, according to study co-author Rafe Brown, a professor of ecology and science. evolutionary biology and curator in charge of the KU Institute of Biodiversity and Natural History Museum.

“In this case, the trained ‘expert field biologists’ misidentified specimens, and we did so repeatedly, for years, without recognizing the importance of our findings, which were preserved and assumed as nondescript and indescribable juveniles of common snakes,” it is quoted. to Brown in a statement.

“Many times people in the field, myself included, may not know what we are seeing at the moment when we could have made the discovery; no one can really be an expert on everything, “Weinell said.

Biodiversity collections allow scientists to go back to specimens and continue to study them in new ways.

There is much more to discover, or rediscover, especially as technology advances and new data becomes available to scientists.

“Now that we get complete genome data from snakes, what is really changing the way we understand evolution as a whole, really, the way we define species keeps changing. How that will affect things in the future is not yet clear, ”Weinell concluded.