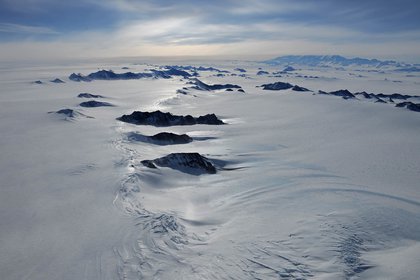 The lakes beneath the Antarctic ice sheet may be more hospitable than previously thought, allowing them to host more microbial life.

This is the finding of a new study, published in the journal Science Advances, that could help researchers determine the best places to look for microbes that could be unique to the region, having been isolated and evolving on their own for millions of years. . The work could even provide information on similar lakes beneath the surfaces of icy moons orbiting Jupiter and Saturn, and the southern ice sheet of Mars.

Lakes can form under the thick Antarctic ice sheet, where the weight of the ice causes immense pressure at the base, lowering the melting point of the ice. This, along with the gentle heating of the rocks below and the insulation provided by the ice from the cold air above, allows puddles of liquid water to collect.

More than 400 of these “subglacial” lakes have been discovered beneath the Antarctic ice sheet, many of which have been isolated from each other and from the atmosphere for millions of years.

This means that any life in these lakes could be just as old, providing information on how life could adapt and evolve in conditions of persistent extreme cold, which have occurred previously in Earth’s history.

The expeditions have successfully drilled two small subglacial lakes at the edge of the ice sheet, where water can quickly enter or exit. These investigations revealed microbial life beneath the ice, but whether the larger isolated lakes beneath the central ice sheet contain and sustain life remains an open question.

Now researchers from Imperial College London, the University of Lyon, and the British Antarctic Survey have shown that subglacial lakes can be more welcoming than they appear.

Because they do not have access to sunlight, the microbes in these environments do not obtain energy through photosynthesis, but rather by processing chemicals. These are concentrated in sediments in lake beds, where life is thought to be most likely.

However, for life to be more extended and therefore easier to sample and detect, the lake water must be mixed, it must be moved, so that sediment, nutrients and oxygen can be more distributed uniform.

In the lakes on the Earth’s surface, this mixing is caused by the wind and the heating of the sun, which generates convection currents. Since none of these can act in subglacial lakes, it could be assumed that there is no mixing.

However, the team behind the new study found that another heat source is sufficient to cause convection currents in most subglacial lakes. The heat is geothermal, that is, it rises from the interior of the Earth and is generated by the combination of excess heat from the formation of the planet and the decay of radioactive elements.

The researchers calculated that this heat can stimulate convection currents in subglacial lakes that suspend tiny sediment particles and move oxygen, allowing more of the body of water to be hospitable to life.

Lead researcher Dr Louis Couston, from the University of Lyon and the British Antarctic Survey, noted in a statement that “water in isolated lakes under the Antarctic ice sheet for millions of years is not still and immobile; the water flow is actually quite dynamic, enough to make the fine sediment suspended in the water. “

“With the dynamic flow of water, the entire body of water can be habitable, even if more life remains concentrated in the soil,” he continues. This changes our appreciation of how these habitats function and how in the future we might plan to sample them when your exploration is carried out. “

The researchers’ predictions may be proven soon, as a team from the UK and Chile plans to sample a lake called Lake CEC in the next few years. Samples taken along the depth of the lake water will show where microbial life is found.

The predictions could also be used to generate theories about life in other parts of the Solar System, as explained by co-author Professor Martin Siegert, co-director of the Grantham Institute – Climate Change and Environment, at Imperial College.

“Our eyes now turn to predicting the physical conditions in liquid water reservoirs on icy moons and planets. The physics of subglacial water pockets are similar on Earth and icy moons, but the geophysical environment is quite different, which means “We are working on new models and theories,” he says. “With new missions to icy moons and greater computing capabilities, this is a great time for astrobiology and the search for life beyond Earth.”