With a series that can already be considered long-term like ‘Rick and Morty’ (five seasons making its characters evolve without stopping, and what remains in the many already guaranteed that are in preparation) there are multiple ways to face its proposals. From its relationship with the core genre of science fiction to its narrative resources, going through how their managers approach the work.

Looking ahead to the premiere of the fifth season of the series (HBO Spain arrives on June 21) we have spoken with some of those responsible in a collective interview with other media. Dan Harmon (series creator), Scott Marder (screenwriter), Spencer Grammer (voice of Summer, Morty’s sister), Sarah Chalke (voice of Beth, mother of Morty and Summer) and Chris Parnell (voice of Jerry, married to Beth). Together they have answered some questions we had about the past and the future of ‘Rick and Morty’.

For example, we asked Harmon about the pure science fiction roots that do not separate from the series, in some cases playing with the harder and more literary lines of the genre. He told us that “science fiction is something that would have ended up resorting to equally to tell stories”, since “I’ve always been more fascinated with robots, aliens and space stations than with credit cards, relationships with people and so on.. Which is not that they are not important, but they can also happen on space stations. “

When we ask him why science fiction is of such universal interest, he tells us that “science fiction is like a medicine for people with difficulty interacting with others or something you use to tell large-scale stories or just to get to the point in stories. I did a sitcom about a public university on NBC, ‘Community,’ and very often it ended up being science fiction, because it comes out organically for me and my friends. “

‘Rick and Morty’ has changed over the years: from modest beginnings as a cult product to massive international success. We asked Harmon if this has conditioned the work in any way, and tells us that “not much has changed from the perspective of the scripts. There are more people working on the series and it shows, but from my perspective everything works the same. “Grammer clarifies that” there is more work because the series has grown, and it is more demanding because the stories are delving deeper into the characters, they are more emotional “

However, although there are aspects in which the series has grown, there are others in which it remains very similar to how it has always been. Grammer and Marder tell us that “there is a lot of rewriting in the process of creating each episode.” Grammer states that “sometimes I record an audio with how I think a phrase should be said, and sometimes Dan Harmon gives it back to me by imposing Summer’s voice, because the posh girl accent comes out very well “. Marder says that “Spencer has given Summer a very three-dimensional personality, which has allowed us to know at all times how the character would react to any situation. So there are a few great stories starring Summer in the works.” 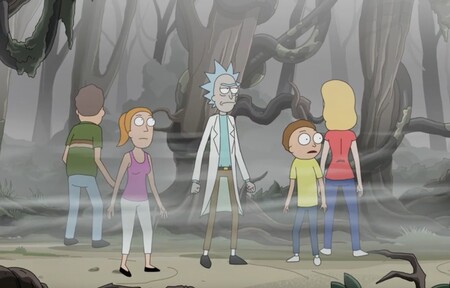 Seen the start of the fifth season, and without going into spoilers, we can say that one of the most interesting aspects of a series that on the other hand remains completely faithful to the constants that have made it famous, is the relationship between the parents of Morty. Chalke and Parnell tell us that “Beth and Jerry are in a very different situation in season five and season one, even though they always have this kind of strange love for each other. One of the best things about being guaranteed 70 more episodes is that the writers have plenty of room to play. and explore. It’s fun that they’re happy right now, to see where they take us. “

Parkell states that things for them, as actors, have not changed much with the growth of the series, although “one of the best aspects of watching the series grow has been seeing how the fans have reacted to the evolution from ‘Rick and Morty’, and how this has gotten bigger and bigger. Especially in a time like the one we have just lived through, with everyone locked up and worried, and in need of laughter. It has been satisfying to be part of a series that has provided some of that. “

They both agree on how interesting it is to play the same characters for so long: Parkell says that “you can explore a character beyond an episode or a season. It is one of the advantages of being in such a long series.” And without a doubt, With its seventy episodes already guaranteed and the enthusiasm of those in charge, there is still much to see from the series before it starts to show symptoms of exhaustion.