Jungle Cruise, a film inspired by the famous Disneyland attraction, with Dwayne Johnson and Emily Blunt as protagonists, will be released in theaters on July 30 at an additional cost.

Disney studios have long found inspiration in the attractions of their theme parks for their films, the most famous Pirates of the Caribbean, which was a success and had several continuations (currently there is a new installment in process); Dinosaur of 2000, a film that became Disney’s first fully 3D animated film, which had a budget of $ 127 million and earned $ 349 million worldwide; but the study has also had some failures such as The Haunted Mansion, a film starring Eddie Murphy in 2003 that with a budget of 90 million obtained a discreet 182 million, Tomorrowland, a film that despite having George Clooney and a budget of 190 million dollars, only grossed just over 209 million, and 2002’s The Country bears, a film based on the attraction Country Bear Jamboree, perhaps one of the studio’s biggest failures in terms of films inspired by its attractions, the film featured a discreet budget of 38 million dollars and barely raised 18 million worldwide. Now Jungle Cruise is released and it goes without saying that it has everything to become a hit at the height of the Pirates of the Caribbean franchise.

Jungle Cruise is directed by Jaume Collet-Serra, a Spanish director who rose to fame in Hollywood for directing horror films such as El Museo de Cera (2005), La orfana (2009). However, it was in action cinema with his fetish actor Liam Neeson, where the director found his way to success with films such as Without Identity (2011), Non Stop (2014), One Night to Survive (2015) or The Passenger (2018). ). For the director, the Disney-produced film is his first major blockbuster, and he has currently finished filming Black Adam for DC films, where he has once again directed Dwayne Johnson, an actor who has starred in Jungle Cruise alongside the always charming Emily Blunt.

The film set in the time of the First World War, follows Dr. Lily (Emily Blunt), a scientist who, due to her position as a woman, has very difficult to get help for her research, travels from London to the Amazon jungle and hires the questionable services from Frank (Dwayne Johnson) to guide her downstream on La Quila, his ramshackle but charming boat.

Lily’s mission is to find an ancient tree with unprecedented healing powers that could change the future of medicine. In this epic quest, the strange couple must face all kinds of dangers and supernatural forces hidden in the deceptive beauty of the lush rainforest. But as the secrets of the lost tree become known, Lily and Frank will face all kinds of difficulties. We will see how his destiny and also that of humanity hang by a thread.

Jungle Cruise is an entertaining film from beginning to end, a cocktail that recalls the adventures of Indiana Jones or Rick O’Connell in The Mummy, with some touches of Pirates of the Caribbean, although this reference is more by the group of old Spanish conquerors Led by Captain Aguirre (Edgar Ramírez) and his soldiers, WATCH OUT the characters played by Quim Gutiérrez (The Neighbor) and especially Dani Rovira (Super López). These characters, as in the Jack Sparrow films, have been cursed for their crimes when they tried to find the medicinal tree, and they share aesthetics with the Davy Jones crew, in addition to acquiring certain supernatural abilities that will put the heroes of the movie.

Highlight the chemistry between Dwayne Johnson and Emily Blunt that works wonderfully, forming a fun couple very much in the style of Indi and Marion in Raiders of the Lost Ark or the one formed by Joan Wilder and Jack T. Colton in After the Green Heart, as well as the interpretation of the villain of the film Jesse Plemons, who plays a German prince whose goal is to reach the tree to tip the war in favor of his country. The music of James Newton Howard is very reminiscent of the John Williams style used in Indiana Jones, which undoubtedly recalls the adventures of the intrepid archaeologist in this epic adventure.

Of course there is no shortage of nods to the famous Disneyland attraction that will delight those who have been there. In short, a tribute to the adventure films of the 80s and 90s that you will not get tired of seeing again and again. 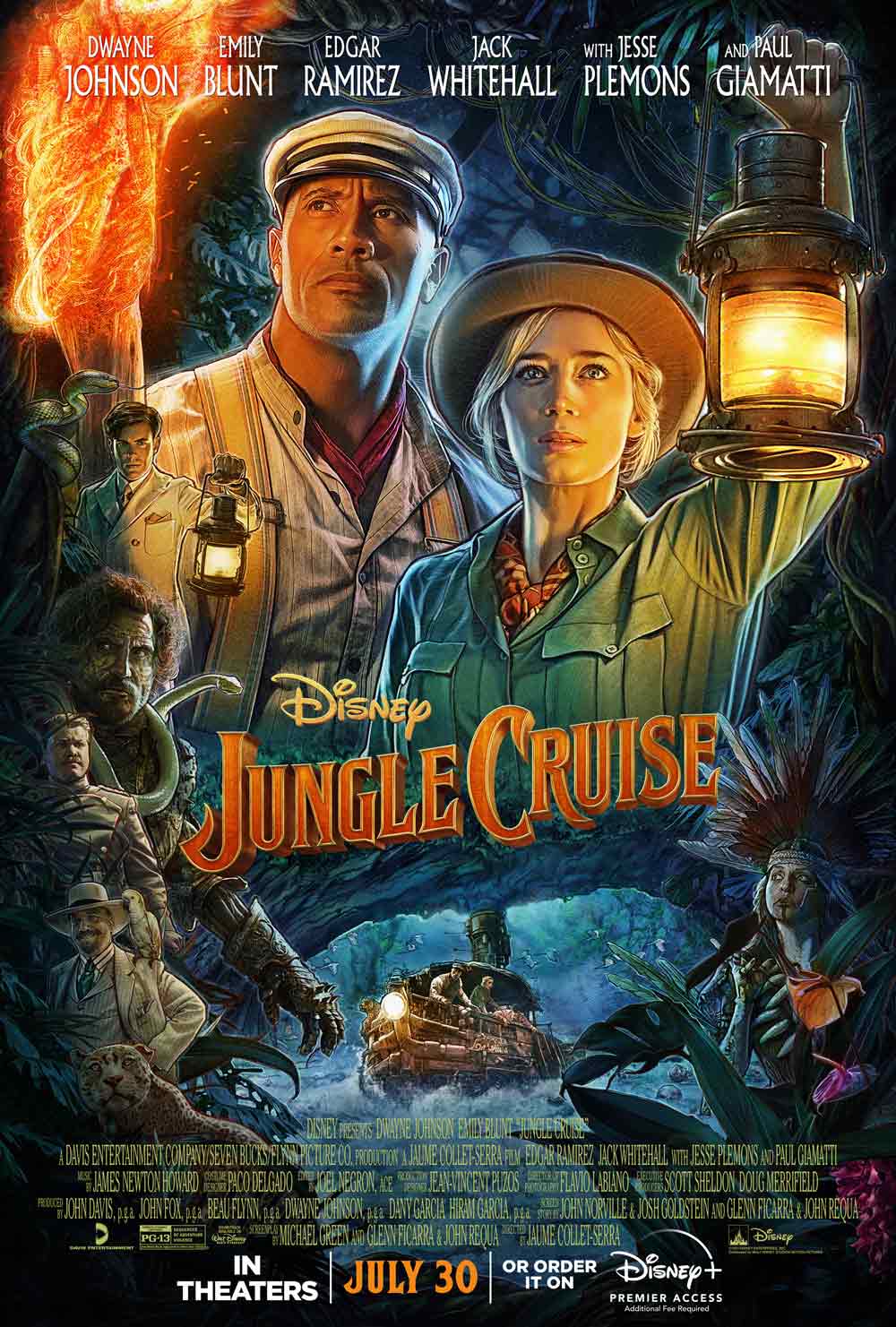