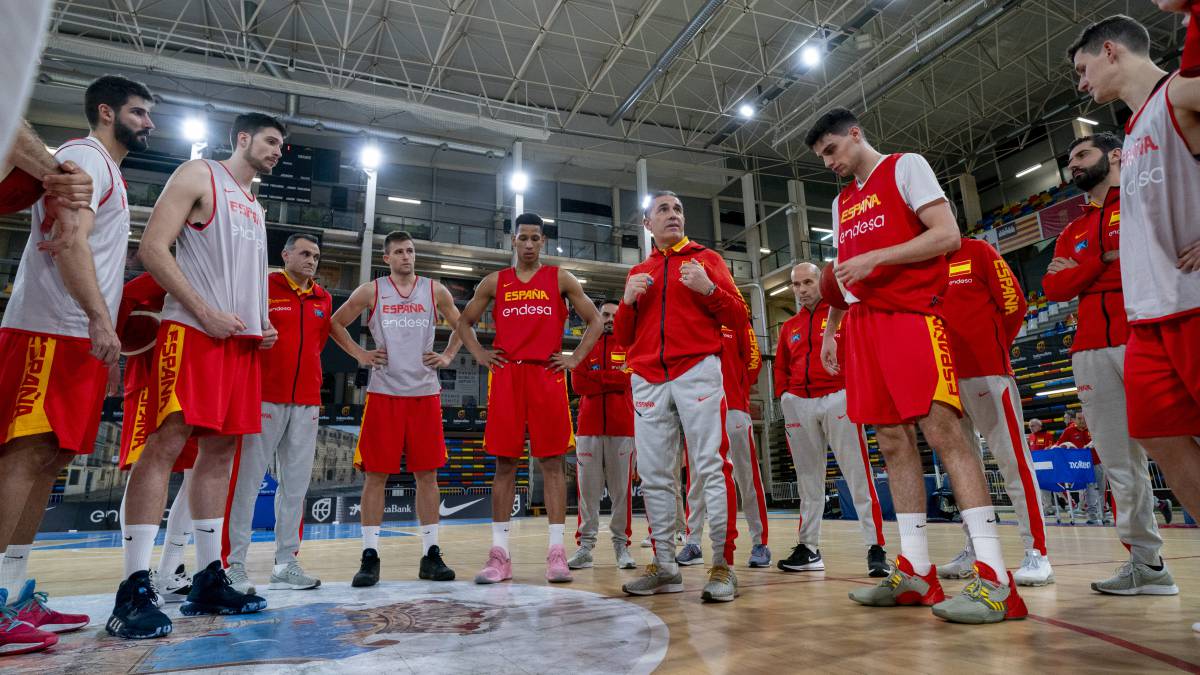 Without European and international sporting events due to the pandemic, 2020 will be the first year without medals for Spanish basketball since 2004. This century, the men’s and women’s senior teams have achieved 13 medals each in 18 championships. Two successful routes consolidated during this decade under the direction of Sergio Scariolo (four golds, one silver and two bronzes in eight tournaments) and Lucas Mondelo (seven consecutive medals since 2013: three golds, two silvers and two bronzes). The Federation made official this Thursday the renewal of its two selectors until the Paris Games of 2024 in a ceremony held at the FEB museum in Alcobendas. “Today is a day of celebration,” Jorge Garbajosa congratulated himself. “Hopefully that bit of luck will accompany us to be able to repeat the successes achieved in previous years. Everything that has been achieved so far is not a coincidence, but a consequence of the work, enthusiasm, talent and involvement of the athletes and their coaches, with Scariolo and Mondelo at the helm ”, underlined the president of the Federation.

The domino effect of the transfer of the Games upset the sports cycles and also the links of the coaches with the Federation. The contracts of both expired this summer, after the Olympic event, and the respective renewals were postponed until the reelection of Garbajosa in the presidency of the FEB. “Trust in them is total. Their results support them. The intention is not to renew them for a year to cover the Games in this exceptional situation but to do so for another four-year cycle ”, Garbajosa himself advanced in EL PAÍS in April. “When both parties intend to continue, they usually continue,” said the leader. The agreement desired by all parties after the World Cup and Eurobasket conquests in 2019 has been completed smoothly.

“The great title that we have achieved these years has been to consolidate the respect the whole world has for our basketball. Spain can be proud of it. In the United States, Canada, or Asia, one realizes that things have been achieved that will last forever. The commitment and the workforce, regardless of talent, has been passed from generation to generation, “Scariolo said after the renewal, thanking the Toronto Raptors” for the facilities to be able to maintain the dual role “on the benches. Then he spoke of the two great references of the team, the Gasol brothers. “Marc has a level to spare to continue for a few more years in the NBA,” he said first. “I don’t see a future without Pau. With what role? That will be decided by a doctor or by Pau himself when he returns to the competition and feels the sensations that his body transmits ”, he added later. “Next year there will be two exciting challenges such as the Eurobasket 2021 in Valencia and the Tokyo Games. I want to ask all the fans to continue supporting us in these difficult times, ”added Mondelo, by videoconference from Japan, anticipating the challenges ahead.

Scariolo, 59, came to the position of coach in February 2009 to replace Aíto García Reneses and, after reaching two European golds and an Olympic silver with the best generation of Spanish basketball, he left in November 2012 to “take air and distance ”. Two and a half years later, the Brescia coach returned to the place of success to help that same group straighten their legend at the Rio Games after the hit at the World Cup in Spain. In his second stage he already has four medals, with time also to win an NBA ring in 2019 as assistant coach to Nick Nurse in the Toronto Raptors. Scariolo has led Spain in 85 official matches, with a balance of 66 victories and 19 defeats. With the 2019 World Cup matches in China, Scariolo became the second coach with the most official matches directed, surpassing Lolo Sainz, and only behind the historic Antonio Díaz Miguel. For his part, Mondelo, 53, took office in 2012 after winning the first of his two Euroleague with Perfumerías Avenida. Since his arrival on the bench, the women’s team has not left the podium and, in this section, he has combined the selection with tours in China (2012-2016), Russia (2016-2019) and now Japan, where he directs the Toyota Antelopes . His balance with Spain is 74 official matches, with 64 victories and 10 defeats.

The roadmap of the men’s team has as milestones in this cycle the Tokyo Games in 2021, the multi-site Eurobasket in 2022 (in Germany, the Czech Republic, Georgia and Italy), the 2023 World Cup in Philippines, Japan and Indonesia and the Paris Games in 2024. While the female will face the Valencia European and the Tokyo Games consecutively in 2021, the Australia World Cup in 2022, the 2023 Eurobasket and the 2024 Games. “When I entered here there were a strong nucleus formed by the fantastic generation of the ’80s, which has marked a before and after in the history of Spanish sports, plus some dinosaur that remained (said with a smile by Garbajosa, sitting next to him). In the last World Cup, none of those players were there anymore. The ability of these players has not been to score baskets, but to ensure that the way of competing has been transmitted, sometimes unbeatable ”, Scariolo closed.