Seven is a magical, mystical or perfect number in many cultures and religions, and it is even an important number in astronomy or biology. Also in Hinduism, where seven are the heavens, the chakras, the sacred rivers, the sages or the holy cities. Seven years ago since the Hindu Satya Nadella replaced Steve Ballmer, who at least made us laugh, as CEO of Microsoft.

In the weeks leading up to Ballmer’s departure announcement in February 2014, Microsoft’s stock hit $ 35 at its monthly low. On the day Nadella blew the seventh of the cake for his CEO anniversary, February 4, the stock closed at $ 242. In seven years, Nadella multiplied his value by seven. Seven may be a key number in Hindu astrology, but Nadella’s has nothing to do with chakras or deities, but rather with decisions that time has proven correct. Satya is at the helm.

You to Los Angeles and me to Redmond

A mixture of hesitations, bad decisions, and gambles that went wrong doomed Microsoft somewhat in the first decade of the century and the first half of the next. He missed the smartphone train with several ruinous investments along the way, his search engine never succeeded in overshadowing Google, who had also taken control of email and the desktop browser; Apple expanded its computer market share and Amazon successfully deployed its cloud services and servers. And Windows losing relevance in an increasingly mobile world.

Nadella arrived and made decisions. He bet heavily on Azure until it became the basis of the company’s revenue (and morale), gave up on continuing to battle against Android and iOS and went on to incorporate its software into them (later he said that he was against the decision of buy Nokia). 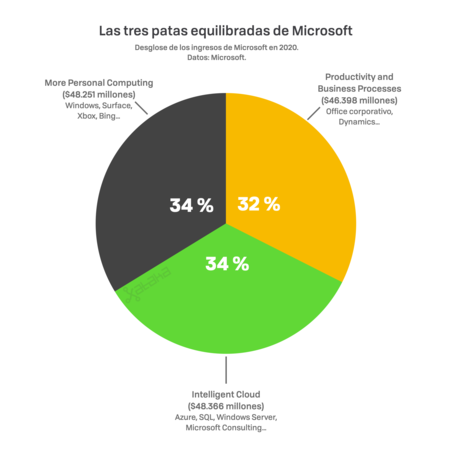 He also successfully completed the transition of Office to a subscription model (started months before his appointment as CEO), launched Windows 10 to very good acceptance, and took other steps that helped change the image of the company, such as buying Minecraft, Bethesda. or Github. Ballmer left us the “developers, developers, developers”, but also said that Linux was “a cancer”.

Nadella embraced free software as until then it seemed like a pipe dream at Microsoft. It even fell to its feet in the pandemic: Teams announced that it reached 44 million active Teams users in the first days of the great quarantine. Twice as much as Slack. By the end of the year it was already at 115 million.

Microsoft is already the third most valuable company in the world by market capitalization, only behind Apple and Saudi Aramco, and has been stabilized in that position for months above Amazon and Alphabet. 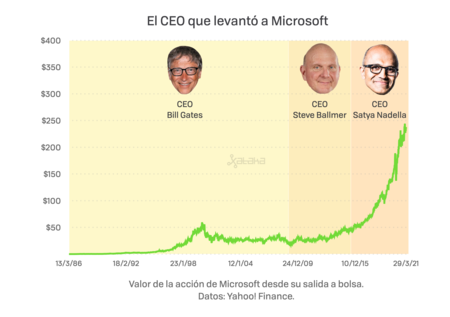 Their income has not stopped growing, especially in the last three years, and so has their gross profit margin. An indicator that was especially touched by Ballmer’s legacy and that Nadella has almost doubled in five years (from 19% to 37%). 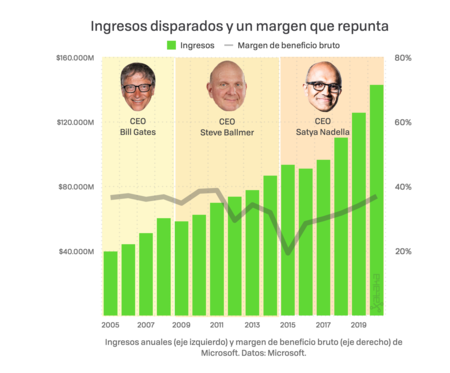 Many of Microsoft’s achievements in recent years are closely related to business environments, but not so much with launches that improve the perception of the company by the end user, more delivered to companies such as Amazon, Google or Apple. However, another of Nadella’s decisions may end up having a lot of weight just for that final consumer: his firm commitment to the video game in the cloud and for the same move towards the subscription model that gave him such good results with Office. xCloud, whose web version is coming down and will multiply the scope of the service.

With Nadella it is no longer necessary to spend 400 euros on a console and 60 on each game: with Game Pass there is an open bar for a small subscription, and with xCloud there is access regardless of whether we have a console or not, whether we have a powerful computer or one modest. And what’s better: they keep the traditional options for those who prefer the previous model. Too many good decisions not to acknowledge Nadella’s legacy.