The boss of the team who has managed to garner two podiums in a season to remember, even fighting for a victory in Italy, has once again expressed his satisfaction with the duo of drivers that he manages every day.

The past Grand Prix of Turkey, the podium of Sergio Pérez on Sunday after a pole position by Lance Stroll the day before that finally came to nothing, only increased the battle between Racing Point, McLaren and Renault for third place on the grid, the square known in the paddock as the one that crowns the ‘first of mortals’ after the untouchable Mercedes and a Red Bull that has been the only one that has been able to follow in his footsteps … even from a distance.

Although those led by Otmar Szafnauer will see their loot of points reduced at the end of the year due to the sanction imposed by partly emulate the W10 with your RP20At the moment, they are the ones in command in this middle zone, despite being used to not closing a good Grand Prix result after Grand Prix, losing points that should have fallen from their side. The same does not happen with those of Woking: while Renault suffers with their reliability, Carlos Sainz and Lando Norris usually squeeze the MCL35 to the max, forgetting that on many occasions the papaya orange car is slower than its direct opponents. 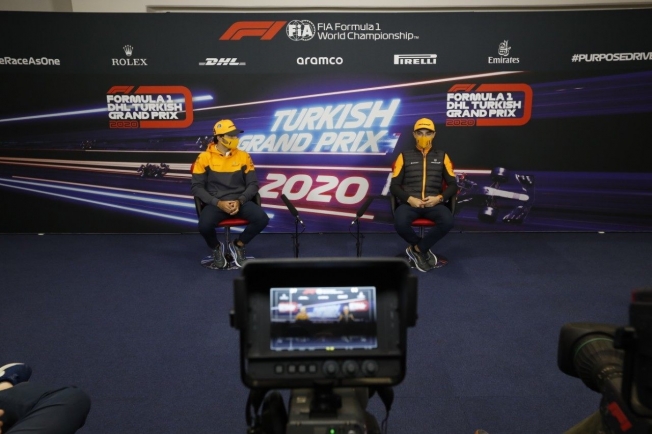 The great friendship between the two will be ‘interrupted’ in 2021.

The regularity Of the Spanish and the British is something that has drawn powerfully the attention within McLaren and, once again, Andreas Seidl has not hesitated to express it. «Having two solid riders who always get points means a great asset that we have in the team “, commented the German leader in this regard. “We have a great record of getting both cars into Q3 in most races, and also in terms of what these guys do on Sundays at the race; it’s extraordinary when it comes to bringing the results that are on the table home. Without a doubt, it is a great advantage in this battle for third position.

The car from Seidl’s lineup started the season behind the RP20 -W10 B but fighting with Renault depending on the circuit, while the drivers from each structure took care of the rest. At McLaren they are aware of the weaknesses of their car after the last great aerodynamic package did not finish giving the expected fruits, with Sainz suffering it in his own flesh when riding it in the Eifel GP to put it to the real test, something that they admit with total naturalness.

“We know that we still have to improve a lot as a team in all areas, and one thing that is obvious is, clearly, car performance. It’s something that we work hard on together, together, between the race team and the development team. That is what we are focusing on. If you compare this year’s car with last year’s, we have taken a big step forward. The way we work together as a team is encouraging to me too, ”Seidl continued.

“The way we work together as a team is encouraging”

Therefore, with only three races remaining until the anomalous 2020 Formula 1 season concludes, the spirits are positive although Daniel Ricciardo arrives to replace a Carlos Sainz who will set course for Ferrari. «It makes me optimistic when looking to the future, thinking that we can take the next stepsbut we shouldn’t forget that the rivals we have are strong, we just need more time to take the next steps as a team, ”concluded Seidl.