The indices of the US stock markets have shown greater strength than the European ones, once again making it clear where the force is and who are the ones that set the standards for the rest of the world indices. Its increases have been greater than in Europe, all above 2.1%. 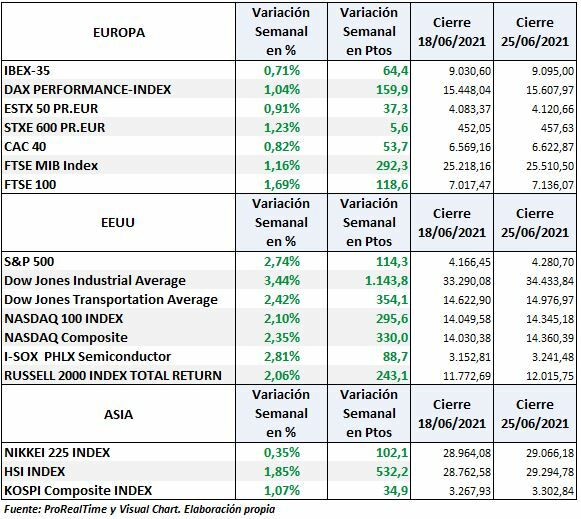 The weekly variations of technology with a +2.21 weekly rise and the main banks have given strength to the indices as can be seen in the following tables:

Three factors have marked and supported the weekly evolution: the appearance of Powell (President of the Fed) before the Joint Economic Committee in Washintong DC, the agreement reached by the Biden administration of 1.2 trillion dollars for infrastructures and a data from PCE that has come out very high but it was expected.

Powell before the Joint Economic Committee and inflation

On Friday 18 there was the quarterly derivatives expiration after which, statements by Bullard, president of the St. Louis FED, stating that the rate hikes would begin in 2022 made investors very nervous as such statements pointed to a upturn in inflation greater than expected by the Fed itself.

Powell’s appearance on Tuesday, June 22, managed to calm investors’ nerves due to his insistence that the rise in inflation was going to be temporary and encouraged the markets with strong rises that same day as investors “bought” the statement.

Powell said: “We will not raise interest rates preemptively because we fear the possible appearance of inflation. We will wait for evidence of real inflation or other imbalances “

The fear in the markets is that “other imbalances” are present, such as:

All of them represent maximum levels or in the zone of maximums for 10 years and 20 years in some cases.

As an example, we can look at the capital inflows (weekly flows) in the Real Estate sector, which are the highest since at least September 2016.

The Biden Administration reached an infrastructure investment deal on Wednesday with a bipartisan group of senators, and on Thursday Biden said it had signed it. It is a deal below their expectations, but enough to keep the markets up.

PCE (acronym for Personal Consumer Expenditure) Inflation is a key indicator for the FED that they use to measure inflation. It is data that is derived from income and personal expenses. The PCE price index is also known as the PCE deflator.

The data was published on Friday and it was a very high figure, 3.4% but Powell insists that inflation will be temporary.

Another aspect that can slow the increases is the low number of companies that are above their average of 50 sessions, which indicates some exhaustion in the companies that make up the indices. As can be seen in the graph below, they are at the lowest level in many years, since 1999. 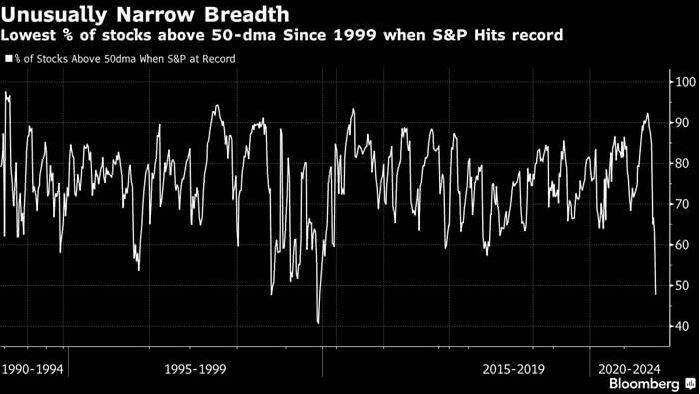 What could change the evolution of the stock markets?

The rebalancing at the end of the semester and the results campaign to come, although it is expected to be good and better than expected, the blackout (blocking of repurchases of treasury shares) could slow down progress throughout the month of July.

On the other hand, and on the negative side, there are the large fund managers that have significant fears of tail risks as shown by the CBOE SKEW index with its highest reading since January 2012, at least.

They continue with a strong evolution this year. According to . sources, oil (+ 45%) will give us the best first half in 12 years and the basic products corn and soy (+ 40%). Industrial metals “are red hot,” they say. 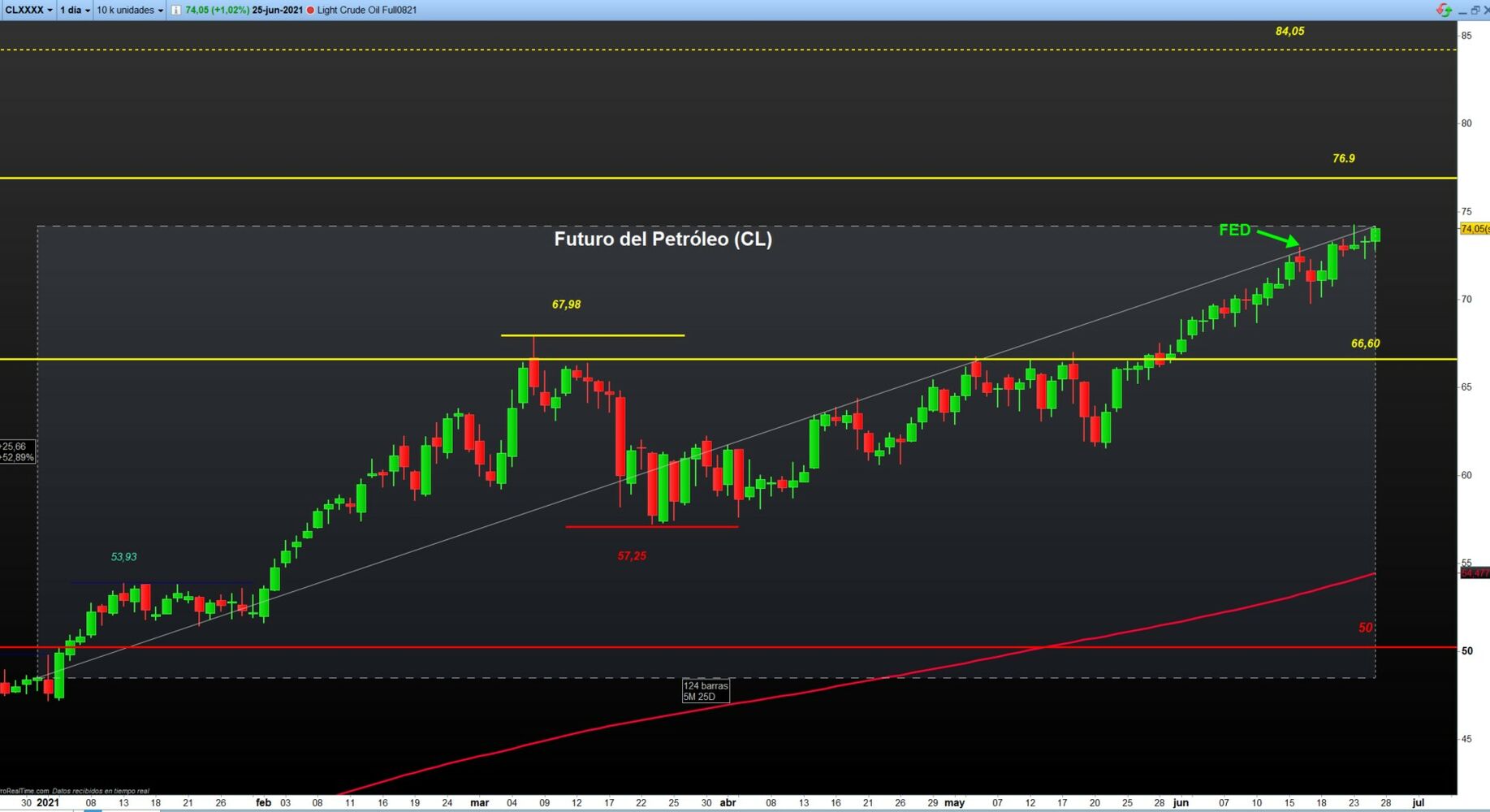 Regarding futures, the future of copper rises 21.97% so far this year.

Just 3 days after the end of June, the monthly charts are still bullish, a lot would have to fall in 3 trading days for the situation to change, then in the long term and for now the US stock markets are bullish.

On the weekly chart, there is little to comment and they clearly point in the same direction: bullish. The doubts come from the index of Philadelphia Semiconductors which is lagging behind and still diverging from the NASDAQ 100 technology indices and Composite, is where a price lateralization could come, even a correction, unless it breaks upwards. Breaking higher could lead the markets to a new bullish pull.

The short-term daily charts are showing overbought levels in the stochastic in the S & P500 and the Nasdaq 100 and bearish divergence, in the latter but that should not necessarily lead to an immediate correction, while in the Dow Jones Ind even has not reached the overbought level.

In short, the US indices could continue to rise next week from a technical point of view, if the Dow Jones Ind and the Philadelphia Semiconductor Index follow the end of the month.

On the monthly chart, it is also bullish despite a certain lateralization that has shown these weeks. Banking sectors are still showing bearish divergence but are taking a throwback on the SMA200 which should confirm with a break to the upside from their recent highs:

In the daily chart, the European indices show some lateralization but it could end up breaking up if the US stock markets drag and the automotive sector accompanies the rise with banks.

This would be very important for the Ibex 35, which lost the bullish guideline and if it were to attack it, it should exceed the 9,300 point zone.