A week has ended with scares coming from the US indices, where Europe is showing strength in the face of signs of weakness in the Wall Street indices that have all closed the week in negative, dragged down by the bad behavior of the technological ones.

Despite the fact that Europe shows greater strength in its indices, the negative effects of the US have taken a toll on Europe, slowing down progress. 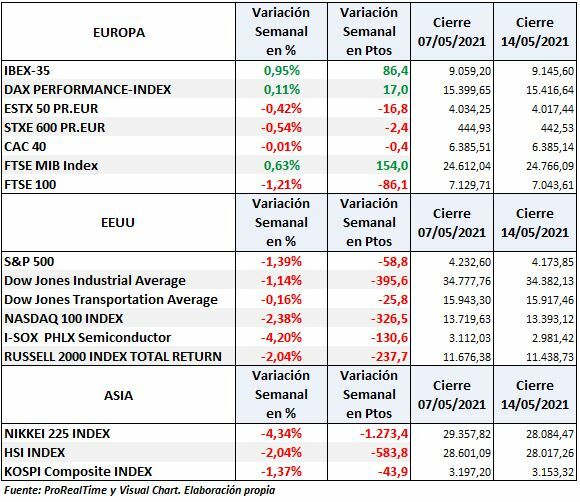 The Big Tech suffered important falls this week as can be seen in the table despite the recovery on Thursday and Friday.

Here is a graph that indicates that in just one day, CTAs went from being 100% long to just 4.1% on the Nasdaq, deleveraging $ 10.7 billion, which among others factors, induced strong downward pressure. 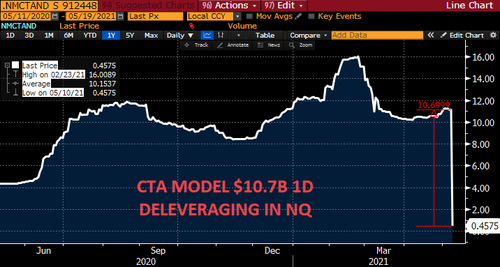 Investor fears continue in the same direction that we have been commenting on: inflation, tapering and rate hikes.

Inflation, despite having presented a very high figure (+ 4.2% year-on-year), has focused on hotels, rental and used cars. This incidence is logical due to the high number of companies in the sector that have remained closed or have gone bankrupt and a greater openness to travel. Doubts about the economy and the shortage of microchips that delay delivery times in the sale of new cars has boosted the used rental and sale markets.

On Wednesday 19 the minutes of the Federal Reserve meeting will be released, to which investors will pay special attention after having published a bad inflation data that scared the markets and a Price data (price index at Producer) also tall. On the other hand, there is a bad employment data for April with only 266,000 jobs, which was a quarter of what was expected.

Ultimately, what investors will pay attention to is any clues that might shed light on when the Fed might start ending its $ 120 billion monthly asset purchase.

There has been the largest influx of US equity funds in 8 weeks.

Continue the asset turnover, with outflows of 0.6 billion dollars from growth stocks and inflows in stocks worth 5 billion.

There have been the largest entries in TIPS (inflation-indexed bonds) and finances this year, thanks to the fact that the Fed is allowing the US economy to accelerate.

The sectors that have received inflows of funds they have been: materials, finances, energy, utilities and medical attention.

The sectors that have suffered outflows of funds They have been: technology, real estate and communications services.

Free webinar on indicators to invest in the stock market

Free webinar to learn how to use technical indicators to invest in the stock market.

Only 3 sectors have closed the week in positive: Basic Consumption, Financial and Materials. 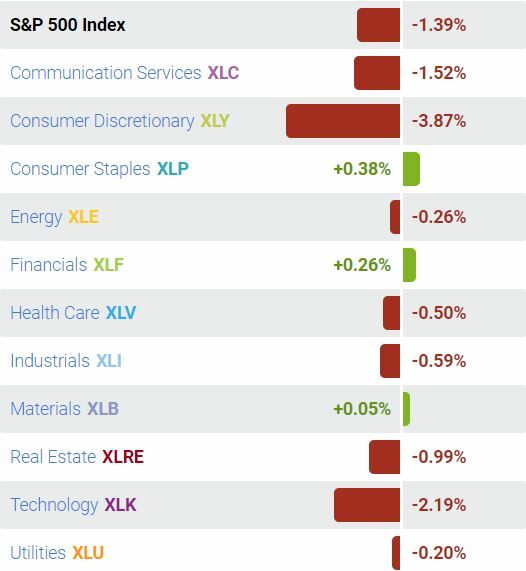 The purchase of put options has increased significantly, entering the danger zone that points to a possible correction, which indicates that the market is fearful of a correction towards the support in the zone between 3,980 and 3,950. 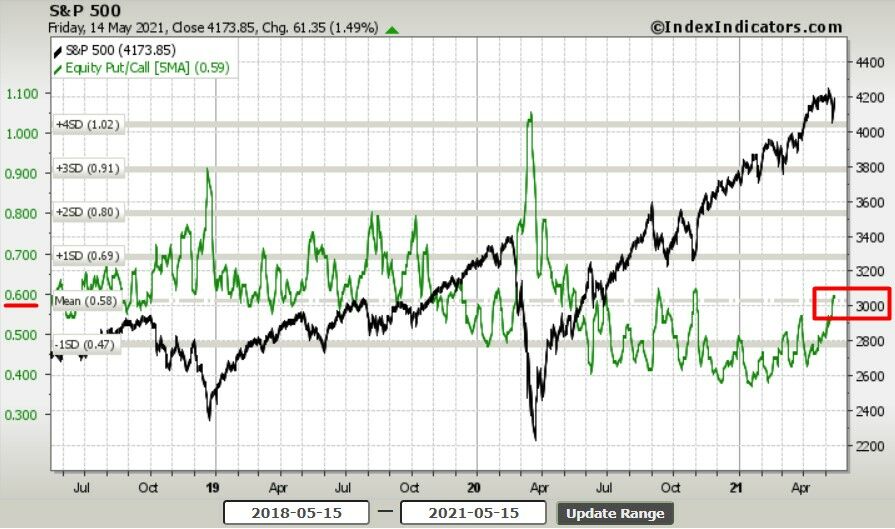 In the long term after the weekly close, the US indices continue to rise freely, although we will have to wait for the close of the monthly candle to see if there could be any change.

Changes can already be seen on the weekly chart, although they are not decisive at the moment: the S&P 500 shows a relative ceiling with a weekly candle that leaves highs, lows and descending closes, but with a candle that at the close shows buying pressure.

The Dow Jones Ind. Simply shows a doubtful candle and in the Nasdaq what we have is a relative ceiling at an all-time high that could simply become a relative ceiling or it may happen that due to divergences, the markets end up falling. It has been four weeks now, leaving week after week decreasing highs, lows and closes.

The technical rebound that started on Thursday the 13th, supported by the oversold level of the stochastic oscillator, allows us to establish relatively close control levels.

The movements will be relevant to continue upward in the short term, as long as they all break resistance levels at the same time. On the contrary, the loss at the same time of the first levels of control could give way to a correction.

If all the indices do not go in the same direction, we will most likely witness a lateralization of the prices.

All this without forgetting what the Nasdaq Composite and the Philadelphia Semiconductor Index do, which should move in the same direction as the Nasdaq 100.

The European indices show greater strength than the US indices, but it is inevitable to consider the influence they exert on Europeans.

Wall Street-induced declines have been corrected quickly and strongly in Europe where the banking sector has shown its support and the automotive sector is holding on with pincers.

DAX and EURO STOXX 50 advance again with the appearance of trying to attack the highs again.

The IBEX 35 tends to recover quickly and its appearance is good, with clear support from the banks included in the index, among which the strong rise of Banco Sabadell stands out, no less than 11.35% in one week.

It is a time when the levels we are at do not invite us to enter in the short term due to the expectation of a possible correction but the movements are wide enough to be able to trade and obtain additional returns.