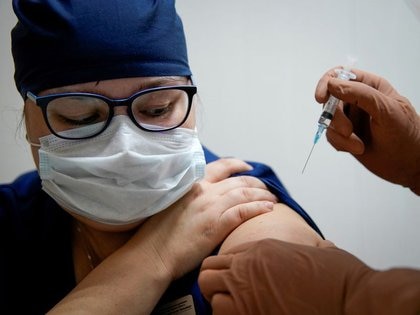 File photo of a doctor at a regional hospital in Russia receiving a dose of the “Sputnik-V” vaccine against the coronavirus. Oct 12, 2020. REUTERS / Tatyana Makeyeva

By Gleb Stolyarov and Vladimir Soldatkin

MOSCOW, Nov 19 (.) – Russia resumed vaccinating new volunteers in the Sputnik V flagship COVID-19 vaccine trial after a brief hiatus, staff at six of the 29 clinics participating in the trial said. Moscow is moving forward to accelerate plans to inoculate the population.

In late October, eight clinics told . the trial was temporarily halted to add new volunteers, with some clinics citing high demand and shortages of doses.

Alexander Gintsburg, director of the Gamaleya Institute, which developed and manufactures the vaccine, said at the time that the uptake of new volunteers had slowed due to the decision to focus on giving a second dose to those already vaccinated.

“Vaccination has been resumed. Starting Monday, we will reapply the first component (of the two doses),” a staff member of the 46th Clinic in Moscow told . this week.

. reporters saw lines of people waiting for a pre-vaccination medical examination at three Moscow clinics on Monday, Wednesday and Thursday.

“We have resumed vaccination. Many people come to get vaccinated,” said a health worker from Clinic No. 170.

As of Nov. 11, more than 20,000 volunteers had received the first of the two injections and more than 16,000 the two doses, according to the Russian Direct Investment Fund (RDIF). The vaccine developers aim to administer the vaccine to 40,000 people initially.

Alexei Kuznetsov, an adviser to the Minister of Health, said: “The clinical trial is proceeding according to plan. At the same time, a trial with volunteers over 60 years of age continues.”