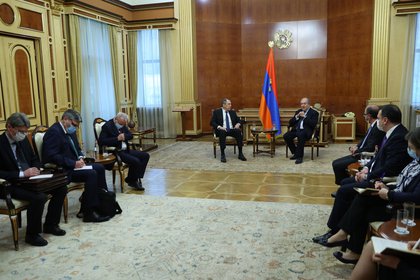 Tbilisi, Nov 21 . .- Russian Foreign Minister Sergey Lavrov assured today that the Armenian leaders are committed to complying with the agreement that ended the war with Azerbaijan in Nagorno Karabakh.
“They are fully committed to the fulfillment of the agreement. The Armenian leaders … stressed that this document helped solve serious problems and save lives,” Lavrov told the Armenian press.
Lavrov arrived in Yerevan today at the head of a large government delegation sent by Russian President Vladimir Putin, who ordered his ministers to guarantee the supply of humanitarian aid and the return of refugees to Karabakh.
The head of Russian diplomacy met with the prime minister, Nikol Pashinián, highly criticized by some Armenian sectors for the defeat in the war against Azerbaijan, and with the president, Armen Sarkisián.
“Everyone has recognized that the document is a way without alternative for the solution of the situation (…), the attempts to put it in doubt, not only within the country, but abroad, are unacceptable,” he said.
The opposition, which considers that the agreement announced on November 10 is a full-blown capitulation, demonstrated again today in the center of Yerevan to demand the resignation of Pashinyan, whom they accuse of betraying national interests.
For his part, Pashinián, in clear allusion to criticism of the Kremlin for not supporting its ally, Armenia, where it has a military base in the war, stressed that the Armenians “always felt the support of Russia.”
In addition, he advocated deepening cooperation with Moscow, including in the field of security as well as technical-military cooperation.
Pashinián recognized the need for military reform in his country, given the increase in the Turkish presence in the South Caucasus, although he considered that the priority now is the return of refugees to Karabakh.
In this regard, the Russian Defense Minister, Sergei Shoigu, assured that the Russian peacekeepers control almost the entire territory of the Karabakh.
“As of today, almost 7,000 civilians have returned. The work continues and I am sure that those who want to return will be able to do so,” said Shoigú, who announced yesterday the demining of the Lachín corridor, which links the territory with Armenia.
Lavrov put the displaced at 135,000 on Friday, including about 90,000 Armenians who left the Karabakh and about 45,000 Azerbaijanis who fled the surrounding areas.
Meanwhile, the Minister for Emergency Situations, Yevgueni Zinichev, warned that more than 30,000 refugees intend to return to the Karabakh shortly, when the infrastructure can only house fewer than 5,000 people.
Russia announced on Friday the end of the deployment of 1,960 soldiers in Nagorno Karabakh, a contingent that will be in charge of guaranteeing peace in the area for the next five years.
Russia and Turkey also finalize the details of the operation of the joint observation center in Azerbaijani territory in accordance with the bilateral memorandum signed on November 11, which will remotely collect information on any violation of the ceasefire.
The fighting in the Karabakh, an enclave in dispute between Armenians and Azerbaijanis since 1988, broke out on September 27 and took the lives of thousands of civilians and military during 44 days of fighting.
Armenia had controlled the territory since its victory in the previous war (1992-94), after which a fragile ceasefire came into force, broken on numerous occasions, although, with the exception of the four-day war of 2016, never to big scale.
Under the Moscow-sponsored agreement that ended the war, Azerbaijan will control more than two-thirds of the territory of Karabakh, a republic that proclaimed its independence after holding three referendums (1991, 2006 and 2017), although this was never recognized by the community. international, not even by Yerevan.