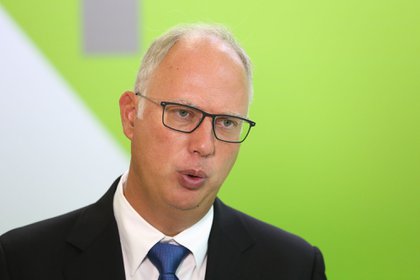 Kirill Dmitrievn, CEO of the fund that produces the Russian-made vaccine, Sputnik V

According to statements issued by Kirill Dmitriev, CEO of the fund that produces the Russian-made Sputnik V vaccine against covid-19, “could have delays” in production.

In an interview on the US news channel CNBC, Dmitriev indicated that the world must begin to have “realistic expectations” with respect to the time taken by the massive vaccine production and distribution process.

“The delays are understandable; the entire production chain has many components, and if you have a problem with one of them that slows things down “said the CEO of the Russian company, adding: “We saw it with Pfizer, we see it with AstraZeneca. And I think there could be some delays with our production as well, as we are increasing capacity … although we hope not“.

Dmitriev’s statements are released at a time when The European Union has called on large laboratories, especially Pfizer / BioNTech and AstraZeneca, to comply with the commitments assumed for the delivery of vaccines against covid-19.

Regarding this issue, the director reiterated: “I think we are seeing delays in the deliveries of all the vaccines and it is understandable.” 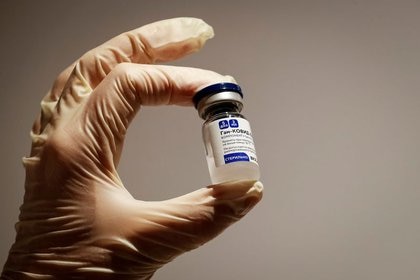 A medical specialist holds a vial of Sputnik V vaccine against COVID-19 in a department store in Moscow, Russia.

This Tuesday, the European Union increased the pressure on laboratories. In the framework of a videoconference of the World Economic Forum in Davos, the President of the European Commission, Ursula von der Leyen, said: “Europe has invested billions to develop the first vaccines against covid-19”, and also highlighted that “Now, companies must keep their promises and honor their obligations.”

According to the official of the European organization, the investments were destined to “build research infrastructure and production facilities”, and were intended to help develop “a truly global common good.”

In this context, Dmitriev said: “We really understand all the vaccine production problems, and we are confident that they will be solved; I think the world just needs to understand that what we are undertaking now we have never done before”.

The CEO of the Russian company justified the delays of the pharmaceutical companies by explaining that it is a process never before carried out in history. “All vaccine manufacturers are doing everything they can to provide vaccines on time”, he assured.

Stella Kyriakides, the European Union Health Commissioner, said last Monday that she was dissatisfied with AstraZeneca’s response and anticipated that the talks will continue. “[AztraZeneca] it intends to deliver considerably less doses in the coming weeks than agreed and announced ”.

The vaccine from AstraZeneca and the University of Oxford, which hopes to achieve approval from the European Medicines Agency on January 29, received adverse comments from European experts, who raised doubts about the effectiveness of the development of the British university for this group old. 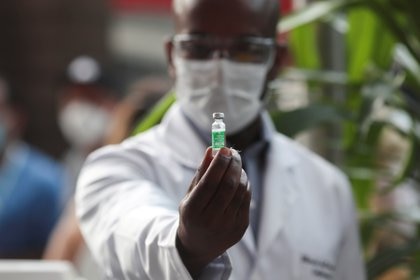 A healthcare worker holds a vial of AstraZeneca’s vaccine

Newspapers, as the Germans Bild and Handelsblatt had exposed these criticisms, advanced that the German government doubted the performance of the product. “The articles according to which the efficacy of this candidate is only 8% in adults over 65 are completely false”, an AstraZeneca spokesperson said in a statement.

A panel of experts from the World Health Organization (who) approved on Tuesday the possibility that the second dose of the Moderna COVID-19 vaccine given after a longer interval than originally recommended. In exceptional circumstances, he said, the standard 28-day period could be extended to 42.

The announcement was made within the framework of the publication of a series of recommendations regarding the inoculant of the American company published by the Strategic Advisory Group of Experts on Immunization of the WHO, known as SAGE, after a review of data.

The body also warned that the vaccine should not be used in pregnant women unless the recipients are healthcare workers or have conditions that put them at high risk. Instead, they say that given the mechanism this vaccine uses to create immunity, it is unlikely to pose a risk when breastfeeding.

The scientific group advises against giving only half the dose with the aim that more people are vaccinated, particularly in countries and places with high infection rates.

Vaccination It is also recommended for people who have had COVID-19Although it is suggested that given the evidence that they could have some immunity for a period of up to six months, priority should be given to people at higher risk in places where there are few vaccines.