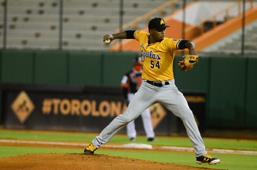 A double with the bases loaded by Robel García in the fourth inning drove the two scores for the Águilas Cibaeñas to beat the Toros del Este 2-1, in a game held in Francisco Micheli Park, corresponding to the winter baseball tournament dedicated to Don José Manuel Fernández, in memorian, BHD León Cup

Marcos Diplán (1-1) won the victory, with three innings of a dirty career, for the Aguiluchos, with a save for Neftalí Feliz (1), who struck out two of three batters faced, the defeat went to the veteran Raúl Valdez.

The Cibaeñas Eagles put their record at 2-3, while the current national and Caribbean champions Toros del Este put their mark at 1-2

The Eagles had their bats silenced, they had barely reached one man of the twelve that veteran left-handed starter Raúl Valdez had faced, they managed to break the score at the top of the fourth inning after two outs.

The attack was started by Rangel Ravelo negotiating transfer, followed by Melky Cabrera’s unstoppable to the right field, Ronny Rodriguez hit by third to fill the bases, Robel García hitting the undisputed RBI both laps, while Rodriguez was put out in third on the play. to close the entrance.

The Romans who were shut out by the eaglet starter Ramon Rossó, who retired the nine bullfighting batters he faced.

The Bulls managed to tie their only career against reliever Marco Diplán who replaced Rossó at the end of this fourth act.

The bullfighting team scored the score against Diplan by walking with four bad balls Miguel Andújar, then reaching the initial Jordany Valdespín by choice play by the pitcher’s premises, who made a wild pitch while hitting Pete O’Brien, who struck out with the same, but the wild allowed Andújar to score from intermediate, leading to the anteroom.

For the Eagles, the right-hander Ramón Rossó opened, who threw three innings, retiring the nine men he faced, with three strikeouts, followed by Diplán, who worked three chapters of a career, a base, a wild pitch and 3 strikeouts.

Then they went up to the box for the eaglets Dario Álvarez (7), Luis Felipe Castillo (7), Michael Inoa (8) and Neftalí Feliz, who scored his first save of the season completed the great task of yellow pitching.