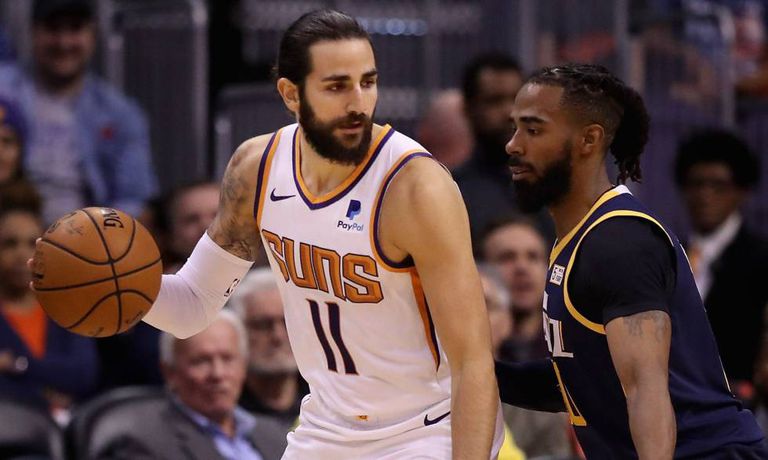 Ricky Rubio and Mike Conley, in a game between Phoenix and Utah.Christian Petersen

Ricky Rubio, a Phoenix Suns player on Sunday and traded to Oklahoma City on Monday, will end up playing next season with the Minnesota Timberwolves. The 30-year-old Spanish point guard returns to the team where he played his first six NBA seasons. The swing to which Ricky has been subjected is typical of the NBA transfer system. The fate of the players with a current contract is in the hands of their teams. Ricky, who has two more years on his contract, is well aware of this, but still reacted with a terse message when he learned that the Suns had traded him for Chris Paul. “What a deal,” Ricky tweeted.

A day later, the El Masnou base declared on Cadena Ser: “By signing a contract, you accept the conditions, but there are forms and forms. Players are privileged, but those who are in charge of these things have to understand that in addition to being players we are also people. It is not a dish of good taste that when you are involved in a project, you leave your skin and see that you are working, at the first change you have to go ”. Minnesota, in exchange for Ricky, traded Serbian center Aleksej Pokusevski, Olympiacos player, to Oklahoma City, whom he chose in 17th place in the draft.

Ricky will play in Minnesota with Anthony Edwards, a 19-year-old and two-meter guard from the University of Georgia, chosen early Thursday morning with the number one in the draft by the Timberwolves. Edwards averaged 19.1 points last season at the University of Georgia. When he was a child his father nicknamed him Ant-Man (ant-man). He excelled as a football player. His life is marked by the death of his mother and grandmother with an interval of eight months in 2015. Another player with whom Ricky could share a team is Juancho Henangómez, who in the last stretch of last season stood out with Minnesota. His contract expired and now he must decide whether to stay in Minnesota or sign for another team.

It was the first virtual draft due to the pandemic, also held 146 days after the initial date that was June 25. Adam Silver, the NBA commissioner, was the emcee from ESPN studios in Bristol, Connecticut, and the players received the news from their homes, accompanied by their family, friends and representatives. Unlike other editions, the uncertainty about the order in which the top favorites would be chosen did not clear up until the final moments.

🇦🇷Leandro Bolmaro to Minnesota Timberwolves !! Draft number 24. Great time for our basketball! It will be directed by @ PPrigioni9. We have another team to cheer on!

Golden State opted for 19-year-old, 2.16-meter center James Wiseman from the University of Memphis. Charlotte, the team chaired by Michael Jordan, was left with the most media player, LaMelo Ball, brother of Lonzo Ball, a point guard for the New Orleans Pelicans. LaMelo, under the tutelage of his controversial father LaVar, stood out early on. When he was 15 years old he scored 92 points in a game for his team at Chino Hill High School. He then played briefly in Lithuania and at another institute, the Spire, signed an exclusive sponsorship deal for sneakers with his father’s signature and had problems with eligibility for the University League. Last season he played in the Australian League.

French guard Killian Hayes, from the German Rathiopharm Ulm, was selected in seventh position in the draft by the Detroit Pistons. Washington Wizards, who were picking in ninth place, opted for Maccabi’s Israeli forward Deni Avdija. Argentine Barça player Leandro Bolmaro was chosen at number 23 by the New York Knicks, who immediately transferred their rights to Minnesota.