Violence against women has become an epidemic in many parts of the world, and after the recent events that occurred in Puerto Rico, where two women were violently murdered by their partners, so far this month of May, the singer Ricky Martin raised his voice and demanded an end to gender violence.

The Puerto Rican star denounced that on his island in just 4 months there have been more than 20 femicides, which is unacceptable, including that of Andrea Ruiz Costas, a 35-year-old woman murdered by her partner, whose body, according to the newspaper Nuevo Día , was found burned in Cayey, and that of Keishla Rodríguez, the young pregnant woman, found dead in the San Juan lagoon, presumably at the hands of her boyfriend, the boxer. Olympian Felix “Diamante” Verdejo.

Keishla Rodríguez’s neighbors speak about femicide | Noticias Telemundo Official video of Noticias Telemundo. Several Puerto Ricans speak after the murder of Keishla Rodríguez and comment on what the sentence should be for the person guilty of her death. Other neighbors leave candles and flowers for the young woman in a space dedicated to her by her family. Download our App: telemundo.app.link/8005Db9UP6 SUBSCRIBETE: bit.ly/TLMDNoticiasYT Noticias Noticias… 2021-05-04T14: 44: 58Z

“What we have experienced on our island in recent days, with the murder of two women, Andrea and Keishla, among twenty others who died this year, also due to gender violence, is a state of terror,” said the interpreter of ” Come back ”, through a message shared on his Instagram account.

“You perceive fear, frustration, pain, indignation … and it is a product of the terror caused by knowing that another woman dies, a victim of femicide, a crime that seems to normalize every day, without equally dramatic actions being taken to stop them,” added the singer.

Martin also called on citizens so that no one is immune from attacks on women.

“No woman should go through fear for her safety, and if it happens, have all the tools in her favor to report any act that threatens her life, no matter how small. And whoever knows that a woman is in danger, whether on a physical or emotional level, also has to take action. We have to act to be part of the solution, and that goes from what we teach at home and at school ”, said the artist.

The Puerto Rican star’s message immediately made many of his followers join the same clamor in defense of women.

“Totally agree, I am from Chile and up to this date there are 12 women killed by gender violence. We just want to live, be happy, live in freedom, be loved and love ”, commented one user.

“In Mexico it seems normal, I do not know what is happening in society, this pandemic should make us reflect and be better people, but it is the other way around. Very unfortunate, ”added another.

“Dear Ricky, this in Spain is a plague of years ago. It would give you chills to know the numbers. Right now we have the case of a missing father with his two daughters, ages 1 and 6. He called his wife to tell her that he would never see them again. Every week there are cases of mistreatment and murder of women by exes, ”said another follower. 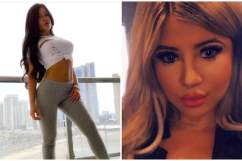