When it comes to spending time with your family, to Ricardo Montaner any excuse is valid. The singer has shown that he maintains a very close bond with all his children, daughters-in-law and son-in-law, that is why they launched the collective musical “Los Montaner”. Something that apparently did not like a follower who encouraged him to eliminate the project to Camilo Echeverry, Evaluna’s husband, because he did not belong to the family. This upset the singer very much, who had no better alternative than to react forcefully.

“Hello hearts. We are going to love having you with us this July 31 a concert from the bottom of our hearts, “wrote the singer-songwriter in a post on his Facebook account.

In the image where the live and virtual concert for next July 31 is announced, he appears with the rest of the clan made up of his son-in-law Camilo, and his sons Evaluna, Mau and Ricky. “My dear Ricardo, I adore you, I love your songs, I respect you, but if you took away your son-in-law Camilo, I gladly pay to see you. Kisses and a big hug, “wrote a follower about the concert announcement.

This did not go down well with Montaner who came out in defense of her daughter’s husband and answered those who had risen to the woman’s request. “Monica beloved and dear Andrés and Marisol, rather than taking away my family, I’d rather take you away. I do better with them than with poisonous people who show their nature in a public comment… God bless you, take care of and transform your bitter hearts. I love them, ”he pointed out. 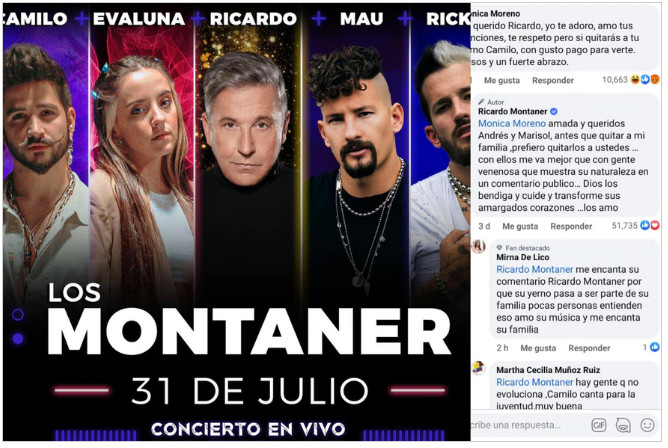 Both the fan’s comment and the singer’s response had a lot of impact on the social network, where there were those who also dared to give their position. “Excellent your answer. Family comes first. Camilo has a very particular style, which I adore. His songs are beautiful and with a tasty rhythm. Family is family and your love for God makes you great. Blessings to all”, “A son-in-law is like a son. I don’t understand why people are so daring. Successes for this beautiful family ”, they said.

“Why call people poisonous and bitter for saying you don’t like someone? It’s just an opinion, I don’t see any evil in it. Everyone has the freedom to express their opinion, that’s what this page is for. Personally, I am a fan and I admire Mr. Ricardo Montaner as a soloist, unaccompanied. That does not make me poisonous or bitter “, were some of the comments of the post.