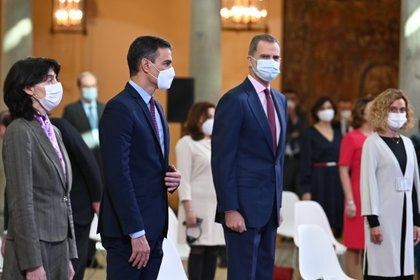 11/10/2020 The President of the Government, Pedro Sánchez (2i); King Felipe VI (3i); and the president of the Congress, Meritxell Batet (d), during the act of commemoration of the 75th anniversary of the entry into force of the United Nations Charter, at the Royal Palace of El Pardo, El Pardo, Madrid, (Spain), to November 10, 2020. During the act of this 75th anniversary of the UN, an attempt will also be made to reinforce the commitment to multilateralism POLITICA Moncloa

The King will be in charge of closing the event, through which Calviño and Ribera will pass among others

The President of the Government, Pedro Sánchez, will be in charge of opening the Ambassadors’ Conference this Monday, the first to be held since 2008 and which had to be postponed for a week as a result of the storm that hit Madrid.

The meeting will take place at Casa de América and some of the around 130 ambassadors will participate in person, while the rest will do so telematically from their destination countries.

The initial intervention by Pedro Sánchez will be followed by that of the Foreign Minister, Arancha González Laya, to expose the strategic lines of foreign policy, while King Felipe VI will be in charge of the closing on Tuesday afternoon.

Three of the four vice presidents of the Government will pass through the appointment, including Pablo Iglesias, who was not on the initial agenda when the conference was to be held on January 11 and 12. From the Foreign Ministry they assure that his absence was due to agenda reasons and his incorporation now is due to the fact that his presence is considered of “interest” for the ambassadors.

Specifically, Iglesias will focus her intervention on the 2030 Agenda, while the third vice-presidents, Nadia Calviño, will speak about the recovery, transformation and resilience plan, and the fourth, Teresa Ribera, will do so on the transition to a green economy.

The Minister of the Interior, Fernando Grande-Marlaska, will also intervene to speak about immigration policy, and the Minister of Industry, Commerce and Tourism, Reyes Maroto, who will present the commercial policy.

All of them will also be joined by the directors of the different geographical areas of the Ministry of Foreign Affairs in order to review the entire international and European agenda of the Government, as well as the modernization of this department.

This will be the sixth Ambassadors Conference to be held. The first meeting of this type took place with José María Aznar as Prime Minister in 2001 and the last one was held in 2008, with José Luis Rodríguez Zapatero in Moncloa.

The intention of the current Government, according to Foreign Affairs, is to keep this appointment on an annual basis, similar to those held in other neighboring countries and with a view to making the Executive’s foreign action strategy known in detail.