In 2003, still in the midst of a revival of slasher terror, hit theaters’ Km. 666: Detour to Hell, ‘a low-cost film that had a decent box office success, which allowed it to have five more deliveries in the domestic market. Thanks to the fact that it became a true saga, his reboot, titled ‘Wrong Turn: Path to Hell’ has ended up arriving, which seeks to tell a story completely different from what was seen in the original film.

Although ‘Wrong Turn’ has the scriptwriter of the first installment, Alan B. McElroy, its execution differs a lot. What seemed like a substitute for ‘The Hills Have Eyes’ or ‘The Texas Chainsaw Massacre’, is now reinvented with a premise whose resemblance to the original film is only in its first minutes, when agreeing that a group of university students take a wrong route and end up living a real hell. Taking that starting point as a reference, the reboot is completely different from its predecessor.

That, of course, enriches and benefits the film, showing that it is possible to perform a reboot different from the ones usually seen. However, sadly, the thing remains there. It is true that, by distancing itself from the original plot, it allows the story embraces other references, such as ‘Midsommar’ or the more classic ‘2000 maniacs’, by changing the classic monstrous villains, not a trace of Three Fingers, for that of a tribal and spiritualist sect.

A reboot that seeks its own identity

That shift in focus isn’t bad. In fact, the way it begins to be executed is more distressing, moving away from the expected of gore cinema, although with several bloody scenes that break from time to time that spectral atmosphere and constant flight that the film has. But nevertheless, the feeling of novelty is there, because the McElroy script does not know how to carry the plot. Nelson’s address is very flat, letting various scenes in which the audience should feel distress, provoke the opposite. 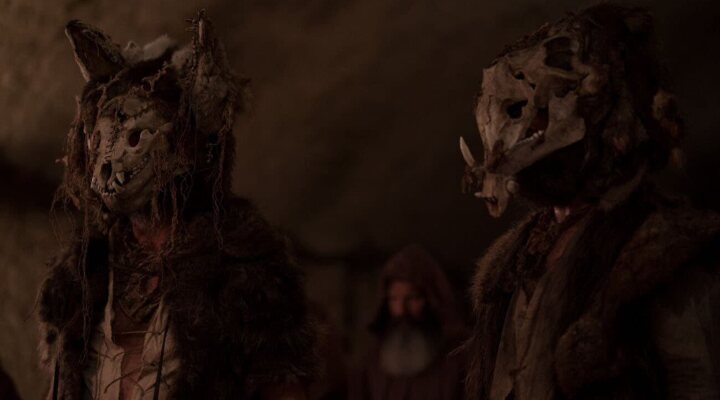 The lack of rhythm and adrenaline cause that, finally, the story ends up losing terror. It also does not help to seek to give plot twists, especially in the last part, in which one falls into contradictory and poorly explained situations, in which it is not clear if the young people who have been victims of this wave of terror have been by the killer instinct of the sect or by mere chance.

Although the interpretations are moderately good, especially that of the Spanish Charlotte Vega, that does not mean that ‘Wrong Turn: Sendero al infierno’ is a proposal out of the usual in the slasher genre. It will like and convince the fans of the subgenre, but it will not go further, unlike other similar proposals such as ‘Dark Mother’ or even ‘Host’, which captivated audiences in theaters last year.

The best: The first minutes, how the atmosphere of anguish and terror is created at the beginning.

Worst: That atmosphere is being lost as the story is told.