Undoubtedly, it is always important to vindicate stories starring women, especially those that are out of the ordinary, with middle-aged main characters, who show the current reality that the adult generation lives between 40 and 60 years old, a very large spectrum that has evolved a lot in recent decades and is not yet fully represented in fiction, especially in relation to female reality.

Therefore, initially, Proposals like ‘The trip of their lives’ attract attention. Comedy with a feel-good tone, its premise is reminiscent of titles such as ‘Crazy with joy’, ‘The wish list’ or ‘Let the music sound!’, Recent titles led by women that show a different reality from captured on the big screen and who knew how to reach the public with dramatic stories framed in a comic proposal.

But nevertheless, the memory remains in the premise, since, as the story unfolds, that story of female fraternity, of memories, of support, of references for the new generation, it vanishes to become a German telefilm of the kind seen on public television after dinner. The trip to Mallorca, made by three friends and the daughter of one of the friends of the group who has just passed away, aimed to be a promising journey of rediscovery and initiation, everything remains in a series of situations full of clichés, in which the The pretended humor seems outdated and, worst of all, posed. 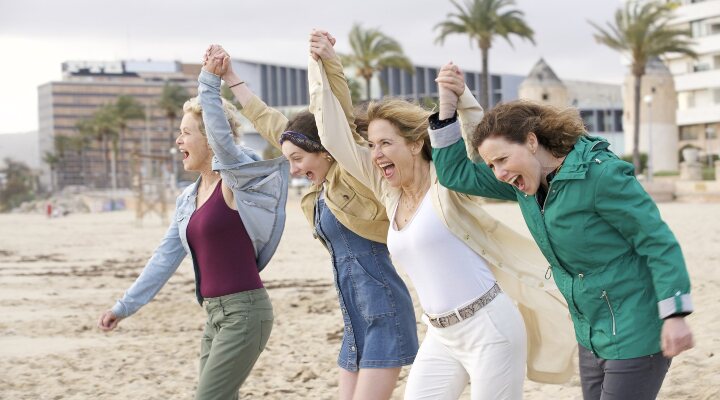 A vain attempt to mix ‘Sex and the City’ with ‘Mamma Mia!’

The film has a very loose script, the work of Jordan Waller, which seems to try to make a mix between the protagonists of ‘Sex and the City’ and the musicality and accompaniment of ‘Mamma Mia!’, by putting various Blondie songs as the soundtrack. Nor is Jules Williamson quite right, the director makes her feature film debut with this proposal, which causes too much sense of déjà vu and, worst of all, ends up boring. Her absence of charisma reaches the leading roles, none of the three friends manages to empathize with the public, neither does the daughter of the dead friend.

By getting lost in scenes more typical of ‘The Hangover’, ‘Bad mothers’ or ‘Mommy’s spree’, ‘The trip of their lives’ fails to dazzle, causing a greater sense of disappointment, especially for being the farewell of Kelly Preston, since it was his last job for the big screen before his death in July 2020. Not even dream places like Paris or Barcelona manage to awaken the boredom that ends up causingNor does the stellar appearance of Franco Nero or Blondie’s music manage to lift it completely, despite listening to songs like ‘Call Me’ or ‘Dreaming’.

The best: Blondie’s music, which tries to give some light to a very bland story.

Worst: Its plot does not engage, does not provoke empathy for its protagonists (when it is supposed to) and has a series of clichés that makes its moments of humor lack grace.