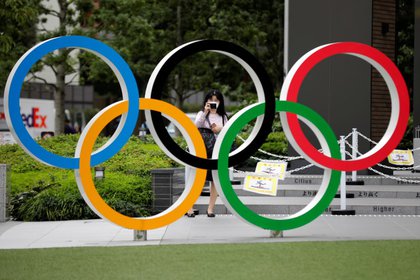 FILE IMAGE. A woman wearing a mask takes a picture of the Olympic rings in front of the National Stadium in Tokyo, Japan October 14, 2020. REUTERS / Kim Kyung-Hoon

By David Dolan and Tim Kelly

TOKYO, Jan 14 (.) – The long-delayed Tokyo Olympics may not take place this summer if the coronavirus pandemic continues to advance, a Cabinet minister said on Thursday, adding that the host country should prepare for any scenario. .

“We need to do the best we can to prepare for the Games right now, but anything could happen,” Taro Kono, minister for administrative and regulatory reform, said in an interview at the . Next conference.

A global resurgence of COVID-19 cases, including record levels of infections in Japan, has raised new questions about the possibility of hosting the Games this summer, which were postponed one year to 2020.

On Wednesday, the government expanded its state of emergency well beyond the Tokyo region and new coronavirus infections in the capital topped 1,500 on Thursday, according to public broadcaster NHK.

The appetite of the Japanese public to celebrate the event has diminished and 77% of people surveyed this week said that the Tokyo Games should be canceled or postponed. But the Olympics, and the tourism dollars they bring in, are a priority for Prime Minister Yoshihide Suga’s government.

Suga and other authorities have repeatedly said that the decision to move forward rests with the International Olympic Committee (IOC) and that their commitment to continue with the preparations remains.

“Everything is possible, but as the hosts of the Games we have to do everything we can, so that when there is a final stage, we can have a good Olympic Games,” said Kono, in one of the most reticent comments so far from a minister. of government around the suitability of the Games.

“The Olympic Committee must be thinking about Plan B, Plan C. But the situation is not easy.”