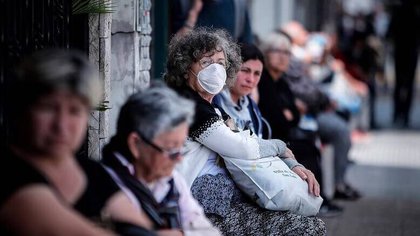 Retirements and pensions will have an increase of 5% in December, as announced by the Chief of Staff, Santiago Cafiero, and the head of the National Social Security Administration (Anses), Fernanda raverta, at a conference at Casa Rosada.

The head of the Anses indicated that, as a result of the payment of the bonus, in December, retirees who collect the minimum credit (68% of the total) will receive approximately $ 28,500. With this increase, minimum pensions will increase by 35.3% so far this year and it is expected that 75% of assets will be able to beat inflation. “With this good news, we began to recover once and for all the purchasing power of Argentine retirees,” said Raverta.

The increase will benefit the 7 million retirees and pensioners and also 8.8 million children who receive the Universal Child Allowance (AUH) and family allowances.

“We are rebuilding the losses that have been trailing since 2018 and 2019, in real terms, based on the formula of the previous government,” said Cafiero, who confirmed that “in the coming days” the new pension mobility project will be sent to Congress and that the Government expects to be dealt with in extraordinary sessions.

The objective of the Government is that this increase is the last one granted by decree, so that the next ones are the product of the adjustment established by the new Pension Mobility Law that will be sent to Congress shortly. 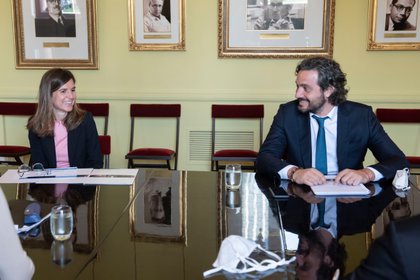 The head of the Anses, Fernanda Raverta, and the Chief of Staff, Santiago Cafiero

This Wednesday, the president Alberto Fernandez He pointed out that the intention is that there is an increase for all retirements and pensions and that it allows the assets to beat inflation. “We don’t want pensions to fall short of inflation. That is a commitment that I made and I will fulfill it“Said the head of state in statements to channel A24.

“When you look at what happened in the year, the minimum pensions of up to 25 thousand pesos were always beating inflation”, He added.

The new pension mobility proposal promoted by the national government to take effect from March of next year provides for a six-monthly adjustment, in March and September, which will be determined through a formula that will contain in equal parts the evolution of wages and tax collection.

This proposal is in line with the mechanism that was in force between 2008 and 2017 and was developed jointly by the Ministry of Labor, the Ministry of Economy and the Anses.

The new pension mobility proposal promoted by the national government to take effect from March of next year, provides for a six-monthly adjustment that will be determined through a formula that will contain in equal parts the evolution of wages and tax collection

It should be remembered that during this year retirees received three increases, all by decree. It was after in December, shortly after taking office as president, the government of Alberto Fernández suspended the application of the mobility formula for retirements and pensions. This formula, implemented by the Government of Mauricio Macri, contemplated increases based on an index made up of 70% by inflation and 30% by the evolution of registered wages, although with a lag of one quarter.

In March, it was 2.3% plus a $ 1,500 bonus, which generated a higher percentage of increase for the lowest assets (thus, those who earned the most lost almost 10% compared to the rest). In June, the increase was 6.12% for all retirements. And in September it was 7.5%, also for all assets.

As of September of this year – the date of the last increase granted – accumulated inflation was 22.3 percent. The increases by decree were between 18.4% for the highest pensions and 28.8% for the minimum credit.

Retirements: how much they could increase in December and what increase is necessary so that they do not lose against inflation