Welcome to a new test of classics. Today we have with us the mythical Renault 5 GT Turbo. We are in Asturias and we are going to test this beautiful unit. We not only want to explain why the Supercinco GT Turbo was one of the greatest exponents of the GTi of the eighties, we want to tell you why every compact and sport utility vehicle has a bit of this GT Turbo in their DNA. And once and for all, we are going to dismantle the myth of “the turbos that jumped in the middle of the curve”.

The Renault 5 GT Turbo was not the first modern sports utility. That honor goes to the Volkswagen Golf GTI, but the Supercinco GT Turbo was one of those that most contributed to popularizing turbocharged mechanics in the segment, which experienced its golden era in the second half of the eighties. Its predecessor, the Renault 5 Copa Turbo, is considered the first sport utility with a turbo engine. Its rudimentary engine and explosive power-to-weight ratio earned it a reputation as a dangerous car.

The Renault 5 GT Turbo was launched on the market in 1985.

Fame that the mid-engined Renault 5 Turbo made sure to cement with its participation in rallies in the first half of the eighties. The mythical “fat ass” has already passed through the Diariomotor channel, by the way. Together with contemporaries and rivals such as the Fiat Uno Turbo or the Peugeot 205 GTi, they inaugurated one of the most longed-for eras in the automotive world, the era of the “little GTIs”Affordable, powerful sports cars, and most of all, great fun. 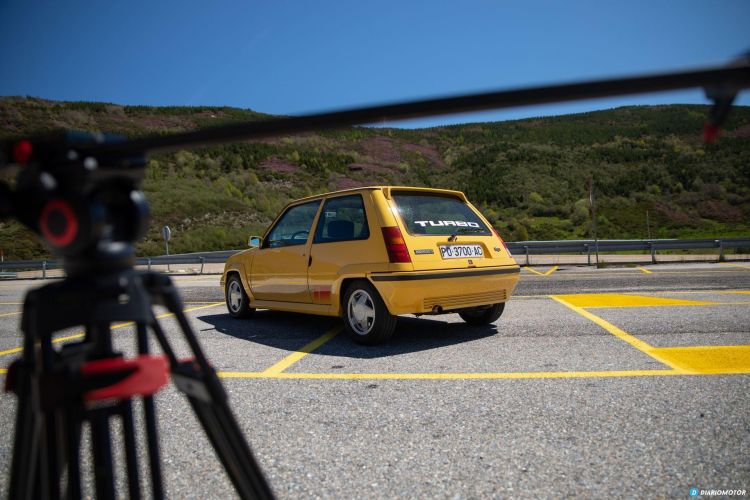 Design of the Renault 5 GT Turbo

The first thing that stands out is how small the R5 GT Turbo is compared to any current car. A modern Renault Clio is 4.05 meters long. This R5 measures only 3.59 meters, 2 centimeters more than a Fiat 500. Its design, born from the pencil of Marcello Gandini, creator of cars like the Lamborghini Countach or the R5 Turbo “fat ass”, is possibly one of the most representative and iconic of the eighties. Most of the GT Turbos sold were white, and the fact that it is yellow adds an even more exotic touch to this unit, which is practically museum in condition.

We start from the front. We love the asymmetric Renault emblem, introduced in 1987 with the facelift of the Supercinco, known as “Phase 2” in our country. That face lift did not alter the characteristic square headlights of the R5, but it did introduce this bumper, painted in the body color and with a more aggressive design. From its lateral profile it is worth highlighting some widened wheel arches.

At the time, and also now, he felt much more muscular than a normal Super Five. It was 4 cm lower than a conventional R5, and still, it looks like a “tall” car. by today’s standards. I also want to stop at these rims, 13-inch diameter and roads with 175 mm section tires. Today we are not surprised to see small GTIs with 18-inch 235mm diameter wheels, but keep in mind that this was really sporty footwear at the time. 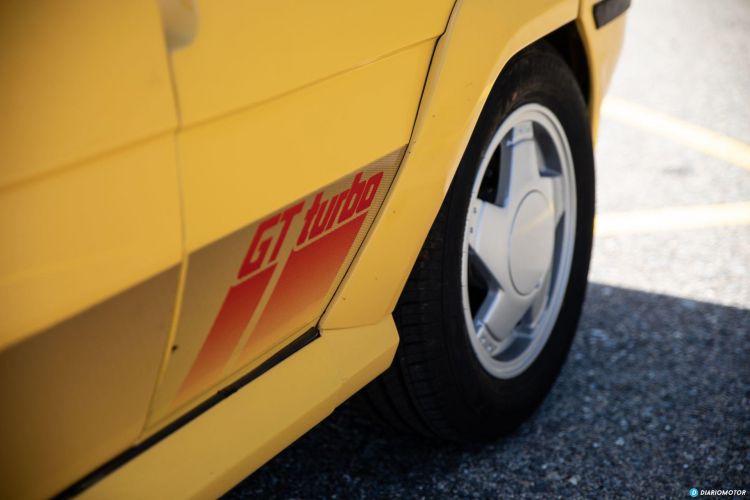 Before moving to the rear, look at this profile, so loaded with straight lines, and so loaded with personality, and with that 80s vinyl that says “GT Turbo”. Why have modern cars gotten so serious? Perhaps from behind the GT Turbo was more similar to other Supercinco, except for the bumper and a small emblem. However, and only in Spain, all the GT Turbo had this gigantic vinyl that remembered that it was not just any R5.

Interior of the Renault 5 GT Turbo

I know you want to see if the turbo jumps in the middle of the curve, but don’t be impatient. Sitting inside the Supercinco is traveling 35 years back in time, Both as for well and for worse. It strikes me, first of all, that despite being a small and narrow interior, the feeling of space is impressive. And it is that the design of the dashboard, and above all, the huge glazed area of the car, they offer us a visibility that no modern car can match. We have lost a lot in this regard with the evolution of cars … 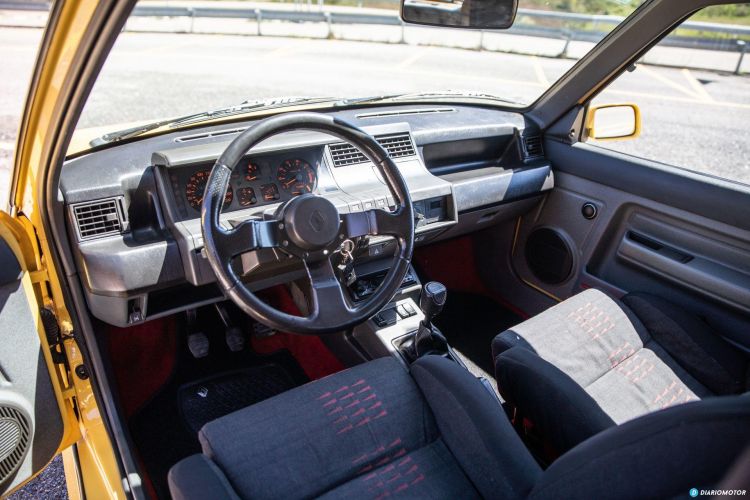 From this interior we want to highlight, first of all, these specific seats, with a little more lateral support, but somewhat soft and with few petals under current standards. The steering wheel does not have an airbag, it is wrapped in perforated leather, and it was specific to this version. In the instrumentation, the speedometer reached 220 km / h (do you remember what impressed this years ago?), And a small pressure gauge indicates the turbo’s blowing pressure. I do miss, yes, a pressure gauge for the oil temperature.

There is nothing special about the rest of the dashboard, the simplicity of which is beyond question. Catches my attention the length of the gear stick and the simplicity of all the controls. All in all, this is a car from the eighties, and it’s not as spartan or basic as other classics that have passed through the canal.

The heart of the GT Turbo

You were looking forward to it. And it is that in a car like this, the rear seats or the trunk are very secondary. The most important thing about the GT Turbo is, without a doubt, its heart. Athough it does not seems, the block design of this 1,397cc engine dates back to the era of the Renault 4, and is an evolution of the Renault 5 Copa Turbo engine. However, there are fundamental differences in its operation, and we can consider it the first modern turbo engine from Renault. 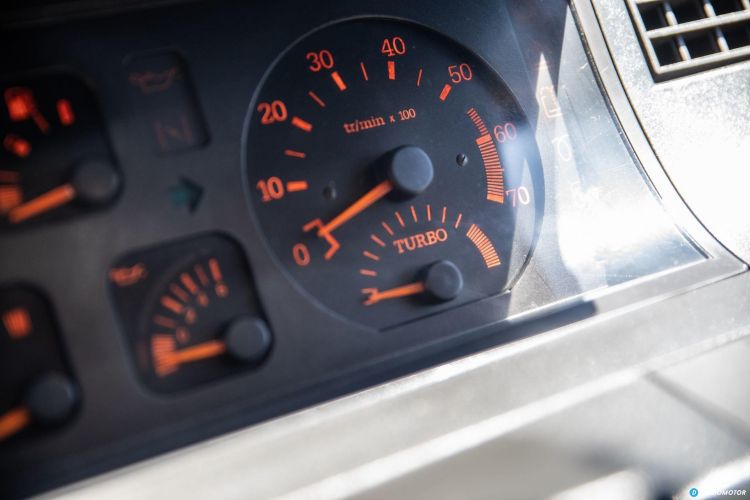 Its engine was of rods and rockers, with only two valves per cylinder. Rudimentary even in the eighties.

This propellant, in Phase 2, it developed 120 hp and a torque of 165 Nm at 3,750 rpm. Mounted in a car weighing just 855 kilos, it offered impressive performance (0-100 in 7.8 seconds and more than 200 km / h in rush). Keep in mind that the most basic Renault 5 barely developed 50 HP of power. But we’ll talk about that as we drive it. In the Superfive already was mounted in a transverse position – as in any modern car – and the air was compressed by a water-cooled turbocharger, an improvement introduced in Stage 2 that avoided problems with hot starts, and offered greater reliability.

Unlike in the Turbo Cup, a much more rudimentary car, the air was compressed before passing through the carburetor, to be mixed with the fuel. It should be remembered that this is not an injection engine, and despite being a relatively car Recently, the two valves per cylinder were pushed by rods and rocker arms, a technology already archaic in the eighties. The power was transmitted to the ground through a very tight five-speed manual gearbox. Now it is time to try it.

At the wheel of an icon of the eighties: will we “jump the turbo”?

First, let’s dismantle, once again, the myth of why the turbo “jumped” in the middle of a curve. All the myths have a small part of reality, and that is that in the Renault 5 Copa Turbo, the air was mixed with the fuel, and then it was compressed by the turbo. This, coupled with rudimentary ignition system and an out-of-point carburetorNot only did it cause a tremendous lag, but the turbo was not too fast to stop blowing, once we took our foot off the accelerator. 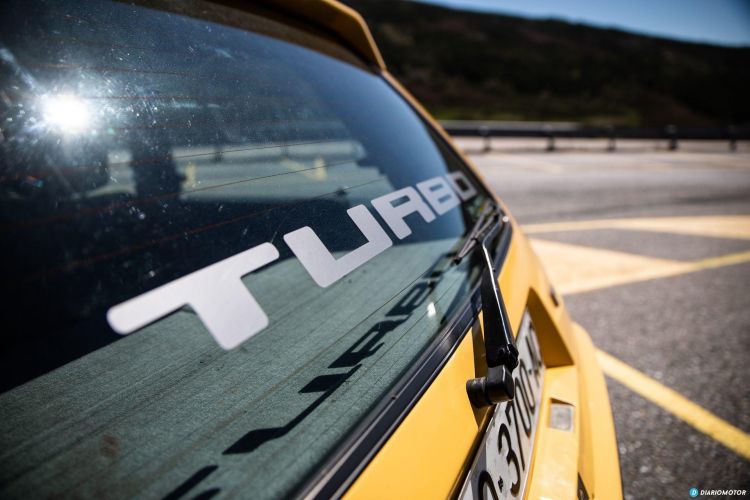 Why then was it said that the turbo jumped in the middle of the curve? Among other things, due to this delay in power delivery, which could cause some drivers on the loose foot to press the accelerator more than necessary, and especially, from my point of view, because of drivers unaccustomed to such powerful and fast cars. If we add to this the quality of the tires of the time … we can suspect why this car was dubbed “the sucker.”

The fame of the “bouncing turbo” also had the GT Turbo, but in truth, it is a more civilized car than it seems. The delay in power delivery continues to attract attention, but once the turbo is blowing, this car becomes a little rocket. He walks a lot, and he walks a lot thanks to a really low weight. At the time, a Golf GTI was not only heavier, it was also less powerful.

I love the steering feel, direct and unassisted. I love the husky and characterful sound of its engine. The change has relatively long travels and a lever that looks like that of a van, but it is not slow or has an unpleasant touch, in addition to having a mechanical touch, which perfectly matches the racing character of the car. It reminds me a bit to the touch of some PSAs from the nineties, and I don’t mean it as something pejorative. 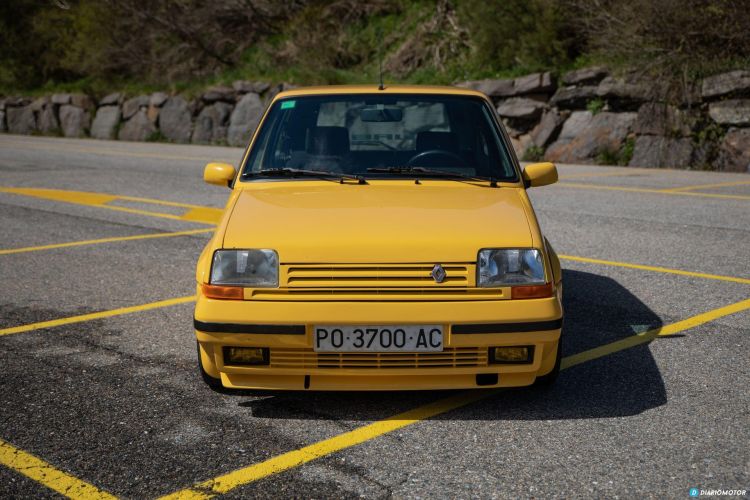 But without a doubt I’ll stick with the agility and liveliness of the chassis. This car seems to completely lack understeer, and the rear helps us to round the curves naturally if we release the accelerator – yes, it is convenient to anticipate with the gas to give time for the turbo to blow again with force. It may be a somewhat nervous car to the limit, but we are not going to seek that limit with this unit in collector’s condition.

The Renault 5 GT Turbo was replaced by the Renault Clio 16v, and for the next two decades, virtually all sport utility vehicles and compacts would switch to naturally aspirated engines and multi-valve cylinder heads. However, time proved that the Renault 5 GT Turbo formula was the most suitable. Cars like the Ford Fiesta ST or the Hyundai i20 N prove that turbo technology is the present and the future of little GTIs – at least until they all go electric.

Meanwhile, we will continue to enjoy these gems of mechanics. The GT Turbo is an exciting, fast, fun car that exudes personality. It was a tremendously popular car and was one of the cars that contributed the most to democratizing high performance, thanks to a very affordable price. And without it, you wouldn’t be able to understand today’s sport utility vehicles and compacts.