In essence, the control of cars has not changed substantially since the first steering wheel was installed in 1898 to replace the reed. There are several approaches to making the evolutionary leap in this regard, with a view to autonomous driving.

Grabbing a wheel is one of the greatest joys of driving, although in certain circumstances it can become a small ordeal, especially on long trips. Autonomous driving will allow us to get rid of this task in a few years, if we wish. That leads us to rethink the current system.

We have seen in several decades how the first power steering arrived, the collapsible steering columns, variable turning ratios in high-end and the assists that intervene briefly on the steering wheel -with electromechanical assistance-. In some models it is possible to take your hands off the steering wheel without the car losing its trajectory, and in very specific circumstances.

The steering wheel of the new Tesla Model S 2021 reminds us a lot of that of KITT, which appeared 35 years ago. Variable transmission eliminates the need for a steering wheel that rotates more than 180 degrees

We recently saw a very bold proposal from Tesla to replace the traditional steering wheel of the new Model S, aircraft-inspired “horns” in which the levers for the lights, windshield wipers and even the automatic transmission have been eliminated. So how do you choose whether to go forward or backward?

Elon Musk responded to the question via Twitter. Depending on the context, the car will determine the possible intentions of the driver. For example, when approaching a wall -parking-, the system will understand that after having braked the next thing you want to do is roll backwards.

If it were the case (which will happen) that the system does not get its forecast right, the driver can choose the direction of travel on the touch screen. If the system is well tuned, you could even avoid some low-speed accidents by selecting the wrong gear.

A triple redundancy system reduced the possibility of failure to levels that bordered on irrelevance. The grace of this system is that the driver is transferred less unnecessary sensations – let’s say -, maintaining the traditional touch through a force feedback system and a lot of fine adjustment.

Shortly after the system debuted, Nissan had to recall 23 units of the 2014 Infiniti Q50 because at low temperatures the electronics stopped working temporarily and the steering wheel had to be engaged with the column by means of a clutch system. Nobody was hurt, we talked for less than a second, but there was that precedent. 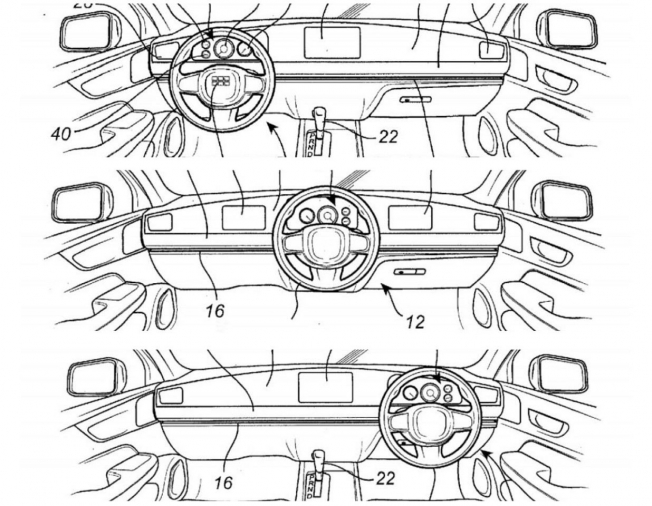 Another chapter in which the steering wheel can evolve is in its location. In October we learned of a system patented by Volvo to be able to freely position the steering wheel in the left, in the center, or to the right, depending on the country where it is driven and the occupation of the front seats.

In this system, the flywheel travels horizontally through a rail, and this necessarily implies a wired steering wheel systems. On the other hand, we have seen in prototypes that the steering wheel can be embedded in the dashboard when not in use, and removed when you want to drive manually.

Steer-by-wire systems have already been adopted with success in competition: drivers gain precision, tire less and punish the tires less

As we have seen, we cannot take for granted that we will maintain neither the shape, nor the location, nor the levers, nor the feel of the steering wheel … not even the possibility of having a steering wheel on board. We are still getting used to automatic gears and the change of mentality of how to handle the wheel will not be trivial.

Those who do not want to “go through the ring”, pun intended, will have to think about driving less new models or that still offer a traditional steering wheel to continue enjoying the classic driving pleasure.