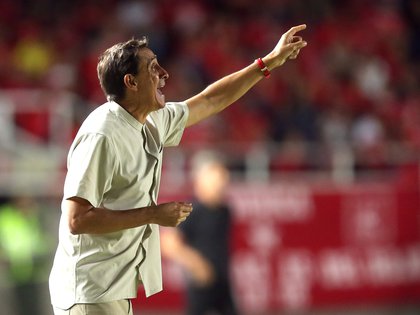 The cycle of Reinaldo Rueda as selector of Colombia It formally began, after this Tuesday he met the team’s headquarters in Barranquilla and was presented at a press conference. The Valle del Cauca has received compliments from fans, journalists, footballers and colleagues, such as Jorge luis pinto. In the last hours, the coach of Atlético Nacional joined, Alexandre Guimarães, who highlighted his virtues and stressed that he is the one indicated to lead the process of the ‘tricolor’ in the road to Qatar 2022 and in the America Cup which will be held this year, if the pandemic allows it.

“I am extremely pleased with the appointment of Professor Rueda, since he is a professional and a person with a long history. He was here and won everything with Atlético Nacional. In addition, he was a World Cup with Honduras and Ecuador, “he said at a press conference.

The strategist of the ‘purslane’ team applauded the leaders for electing ‘Triple R’ as the leader of the sports project of the combined ‘coffee grower’ and referred to the aspects of the Valle del Cauca profile that positioned him as the best alternative to take office. “It was a very successful decision by the Colombian Football Federation, because it is a coach who knows the players from the local environment and those who act in football abroad. He has already been immersed in the qualifiers in South America and knows the environment, “he added.

He also spoke of Rueda’s first challenge: the duel with Brazil, at the end of March. “He is a coach who will know what decisions to make, together with his coaching staff, and they will be the right ones for the commitment that lies ahead. Of course it is not the ideal situation that a coach would like to have to debut, but I think that his experience and knowledge, as well as the empathy that has generated in the soccer environment of the country, are a plus to start their work well, “he said.

Alexandre Guimarães made his debut with a victory at the head of Atlético Nacional; his team won 2-0 over Independent Santa Fe, at the beginning of the BetPlay League I, last weekend. The Antioquia team will return to the scene tomorrow, Thursday, for the quarterfinals of the BetPlay Cup; confronts him Sports Tolima, at the Murillo Toro, at 3:15 in the afternoon. The winner of the confrontation will take the last place within the group of the best four; Sports Quindío, Independent Medellín and Deportivo Pasto they secured theirs last week.

Frank Fabra, the Colombian soccer player with the most local titles with Boca Juniors

One of the most recognized physical trainers of the moment is Colombian, his name is Fausto Murillo and he is a success on YouTube