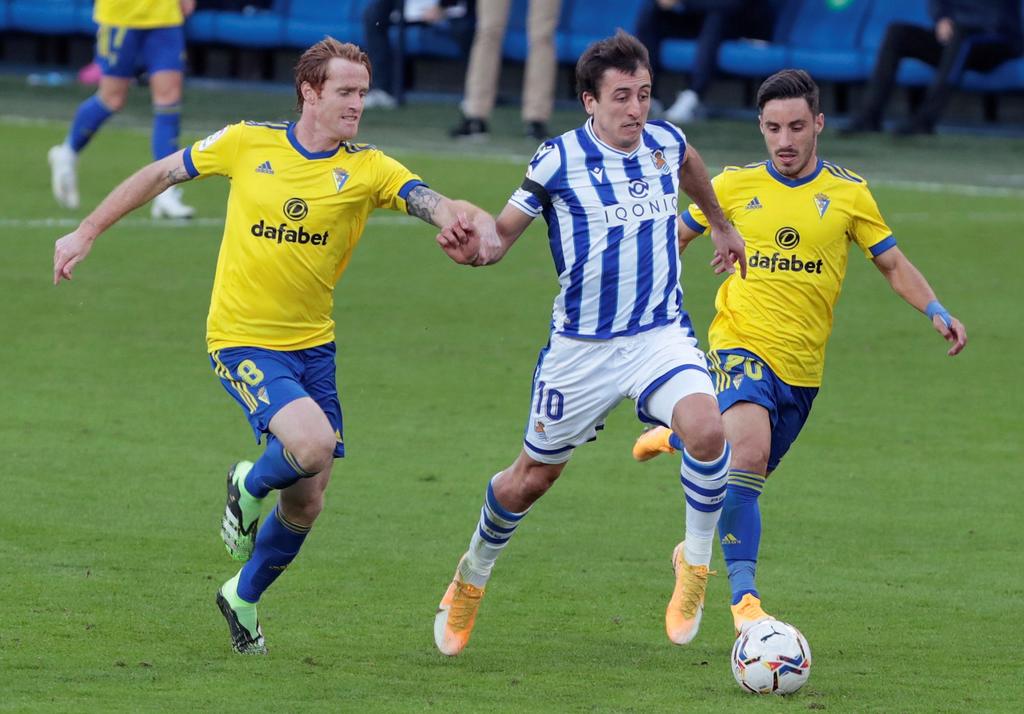 Real Sociedad continues as the leader of LaLiga Santander, with three points ahead of Atlético de Madrid, after a great victory against the tough Cádiz (0-1), which in passing equaled its best historical streak of six wins in a row.

Although the Argentine Diego Pablo Simeone team has two games less played, Imanol Alguacil’s team savors this first place every day, which he defends day after day with good football and daring. But he does it calmly and calmly, as the Basque coach claims: “You have to enjoy the moment with your feet on the ground”

Their numbers are magnificent: 23 points in ten games, with seven victories, two draws and one defeat, 21 goals in favor (highest scoring team) and only four against (only surpassed in this aspect by Atlético, who have conceded two ). And the sensations and football are not minor.

On this occasion, a header from Swede Alexander Isak in the 66th minute, after Mikel Merino had ruined two clear occasions in the first half, was enough for him to score the match before the revelation of the start of the season, Cádiz, who despite This still does not know the victory at Ramón de Carranza, but it has given the surprise to illustrious people on their trips, such as against Real Madrid at Alfredo di Stéfano.

Alvaro Cervera, a cadista coach, could miss such important men as the scorers Álvaro Negredo and the Honduran ‘Choco’ Lozano, the defender Juan Cala and the Argentine half Augusto Fernández, all injured. He wanted in the end but couldn’t against the solid league leader.

Granada, revelation of the past season that wants to confirm its condition in the current campaign, suffered its first defeat at home against Valladolid (0-2), whose second success in a row allows them to get out of relegation.

The team that Diego Martínez trains was more vulnerable than usual and Sergio González’s team took advantage of it, although he did not find the way to score, after spoiling some other clear option, until the extension of the first half.

Óscar Plano led the way to victory for Valladolid and Brazilian Marcos André, in the first section of the second half, increased the rent. The Portuguese center-back Domingos Duarte fed Granada’s hope of a comeback, but it was a mirage. The Pucelano team remained firm and finished the task at the end with a goal from the debutant Joao Pedro Neves ‘Jota’, who made his debut.

Alavés and Valencia signed a draw (2-2) in a vibrant match that began with the Vitorian team clearly winning and ended up asking for the time against a Levantine team that had clamorous chances to win.

Alavés linked their fourth game in a row without losing (one win and three draws) and Valencia could not give continuity to the win that they endorsed before the team break against Real Madrid, but their reaction is good news for the block of Javi Gracia.

Ximo Navarro (m.2) and Lucas Pérez, from a penalty (m.16), paved the way for Pablo Machín’s team, but two goals in six minutes from Manu Vallejo (m.72) and Hugo Guillamón (m.78) They confirmed the reaction of Valencia, who, through the first scorer and the Frenchman Kevin Gameiro, had sufficiently important opportunities to have certified his second victory in a row.

Eibar and Getafe prolonged their losing streaks. The 0-0 places the Basque team in three games without winning, which has not won in Ipurúa for six, and the Madrid team in four.

José Luis Mendilíbar’s block was closer to victory, but the sticks and the interventions of goalkeeper David Soria prevented it. The lack of hitting – it is the team with the least scorer with six goals – once again cost him two points against an opponent who, like many others, is the victim of a tremendous irregularity.