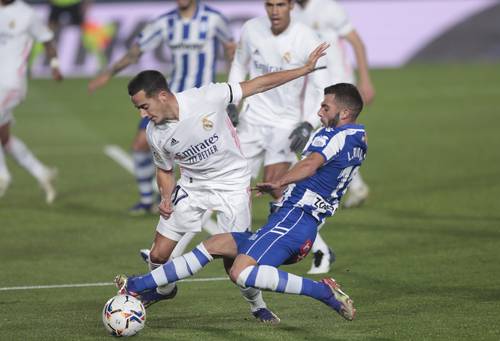 ▲ Those led by Zidane, current champions of the League, lost 2-1. Photo Ap

Madrid. The shadow of penalties haunts Real Madrid, champion of Spain, who suffered a new setback in the complicated defense of the title and is moving away from the leaders.

Before the game, Real Madrid paid tribute to the star Diego Armando Maradona, with a jersey of the Argentine team in the center of the field while keeping a minute of silence. On the bench and in the stands where the substitute players were, there were also shirts in tribute to the Argentine.

Lucas Pérez converted a penalty that paved the way for Alavés’ 2-1 victory over the Merengue team, which lost more ground to rivals such as Atlético de Madrid, who won the match played a few hours earlier with effort.

After five minutes, Pérez sent the fifth penalty against the meringues in the most recent three games.

José Luis Mato Joselu extended the advantage by recovering the ball, after a failure in the start of goalkeeper Thibaut Courtois, and defined with a long-distance shot with the goal wide open in the 48th.

Casemiro discounted at 86, when goalkeeper Fernando Pacheco rejected a shot from Vinícius Júnior, and sent the ball into the nets from the small area.

With its third setback of the season and third day without victory, Madrid stalled with 17 points in fourth position; six less than Atlético de Madrid, who beat Valencia 1-0, and Real Sociedad, whose matchday 11 duel will take place today against Villarreal. Alavés is ninth with 13.

The match got uphill for the whites too early, as they did not have starters like captain Sergio Ramos, Frenchman Karim Benzema and Uruguayan Federico Valverde due to various inconveniences.

In another game, luck was on the side of Atlético de Madrid – where Mexican Héctor Herrera did not play due to injury – as an own goal gave them a tight 1-0 victory against Valencia.

Defender Toni Lato scored a goal on his own goal, unexpectedly saving the Colchoneros at the most difficult moment of the game.

Belgian Yannick Carrasco took a low cross that was not cleared and Lato accidentally hit him to send it to his own nets in the 79th minute.

Atlético scored its sixth victory of the tournament –and reached 25 games without a defeat in the League– to accumulate 23 units and tie Real Sociedad for the lead. The orange box stalled in tenth position with 12 points.

In another match, Moroccan striker Youssef En-Nesyri made his fourth goal of the tournament in the 83rd minute for Sevilla’s 1-0 victory over Huesca.

For their part, those promoted for this campaign, Elche and Cádiz, tied at a goal.