The passionate tennis rivalry between Nadal and Djokovic 0:48

(CNN) – Rafael Nadal’s achievement of becoming the fourth man to record 1,000 ATP Tour match victories should have been celebrated with thunderous cheers and a standing ovation.

Instead, having beaten Feliciano López to reach the exclusive club, Nadal stayed to celebrate almost silently at a 20,000 empty-seat stadium in Paris, given the absence of spectators due to the coronavirus pandemic.

«[Ganar 1.000 partidos] it means I’m old. That means I played well for a long time, because achieving that number is because I have been playing well for many years and [eso] it’s something that makes me feel happy, “said Nadal.

Nadal’s first ATP victory came when he was 15 years old. He beat Ramón Delgado, a Paraguayan then ranked 81st in the world, in a first-round match at the Mallorca Open in 2002. That victory earned him 15 ATP Ranking points and a check for US $ 5,850.

Eighteen years and nearly $ 122 million in prize money later Nadal is one of the most successful tennis players in history.

Nadal’s first-round match was his first since claiming his 13th record title at Roland Garros.

SIGHT: Federer’s letter to Nadal after the Spanish title 20 in Grand Slam tournaments

“I started the game in the worst possible way, especially against a great server like Feli,” said Nadal. “After that, I played under a lot of pressure the rest of the game, but I found a way.

“That’s the main thing… This victory is one of which I am very proud. Personal satisfaction is sometimes greater when you win these games than if you go to the court and win 6-3 6-3 «. 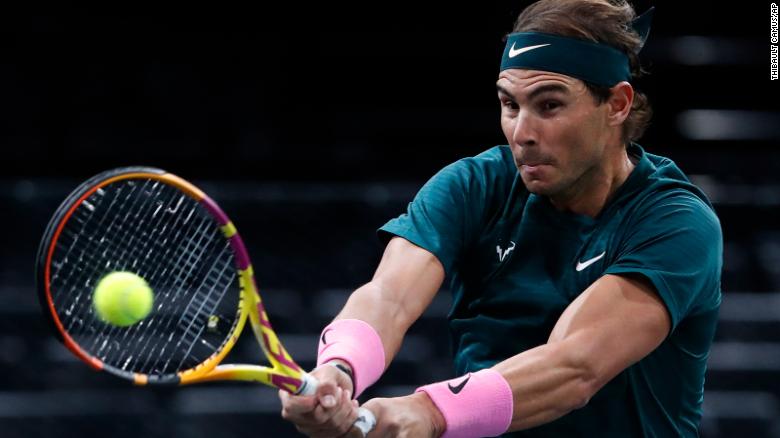 Nadal in the match against his compatriot López.

Nadal will face Jordan Thompson in the next round, after the Australian beat Borna Coric 2-6 6-4 6-2.

While he has been so successful in the French capital on clay courts, Nadal is aiming to win his first Paris Masters Title.