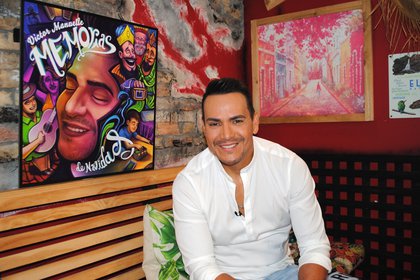 San Juan, Jan 23 . .- The Puerto Rican salsa singer Víctor Manuelle, known as “The sonero of youth”, announced this Saturday that he married the woman with whom he has shared the last thirteen years of his life, his girlfriend Frances Franco.
“After 13 years of living together, today I announce that I made one of the most important decisions of my life. I married this wonderful woman who decided to accept me and share our lives for the rest of our days,” said the singer in his account from the Facebook social network.
“I imagine they will no longer ask me when we got married. I told them that when it was, I was going to inform them. EXCLUSIVEOOOOOO! In case you have any questions, I had never married before,” said the artist.
Today’s announcement puts an end to rumors that she had ended her relationship with Franco.
The “sonero de la Juventud” began his sentimental bond with the public relations in 2008 and since then they have been seen as one of the most stable couples in the music industry.
Victor Manuelle, 52, is a New York City-born Puerto Rican singer-songwriter, salsa performer, but has also had success with romantic ballads.
The artist made his debut in June 1993 with the album “Justo a tiempo”, which would be followed by almost 20 albums.
In 2013 he released “Me llamaé tuyo”, and at the end of April 2015 “Que suenen los tambores” was released, whose single of the same name won a place on the Top Latin Songs charts.
The Senate of Puerto Rico awarded him “Distinguished in Music.”