Daedalic Entertainment announced The Lord Of The Rings: Gollum, a new adventure based on the JRR Tolkien universe coming to PS5, Xbox Series X | S, Nintendo Switch, PC, PS4 and Xbox One in 2021. We don’t know many details except that Unlike other games, directly inspired by Peter Jackson movies or novels, follow in Gollum’s footsteps and enhance exploration with stealth, as the protagonist tries to avoid any confrontation. In an interview to Official PlayStation Magazine, The team reveals new information about the PS5 version.

Daedalic Entertainment’s Jonas Husges comments that the game will have ray-tracing effects on PS5 and that thanks to the SSD “starting a section over after a wrong jump or deadly encounter with an orc guard will be instantaneous. We want to encourage gamers to experiment and the SSD removes a major obstacle“-the heavy loading times-. Although the text is focused on the Sony console, this novelty also applies to Xbox Series X | S.

Regarding the exclusive features of PlayStation 5 and the DualSense controller, no concrete examples have been given, but I know emulate Gollum’s feelings and his actions “will be more tangible, and your physical exertions when you run out of stamina will thus carry over to how you play, “perhaps making it difficult to climb with adaptive triggers or transmitting your heartbeat with the hepatic response.

The Lord Of The Rings: Gollum play a lot with the two personalities of this character from The Lord of the Rings and The Hobbit. The study is working on representing Gollum’s inner world and his conflict, the confrontation between their personalities, and that serves as an anchor for the story and guide the player. 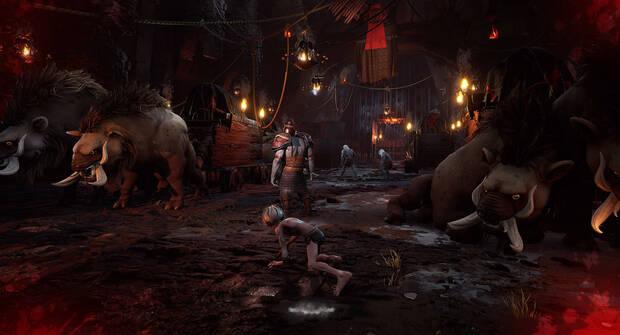