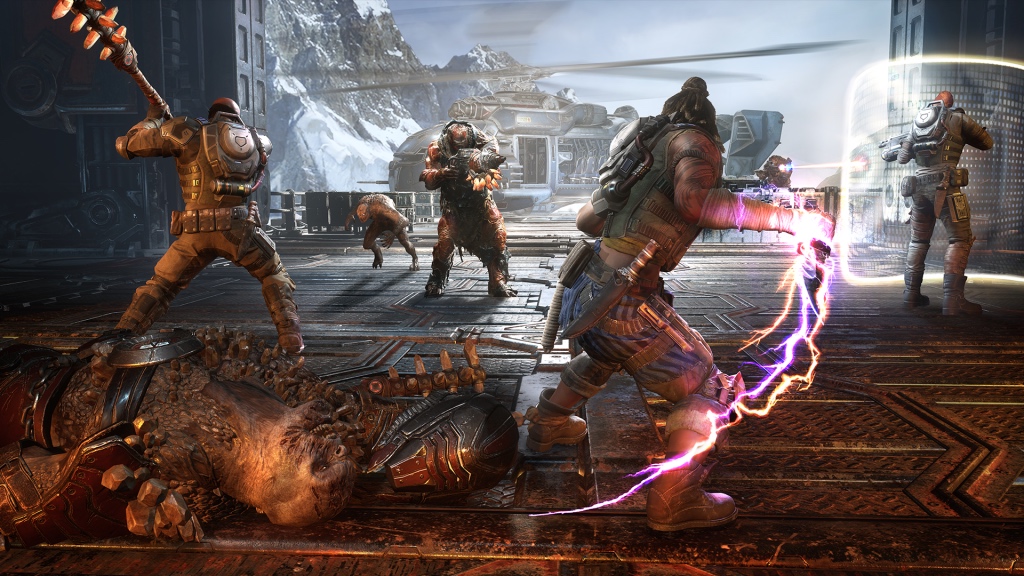 Stop playing by yourself and jump into discovering which are the best online games with cooperative mode for PS5, Xbox Series X | S, PS4, Xbox One, PC and Switch. The experience of fighting alongside your friends or other people far exceeds conventional online titles. Companionship, cooperation and survival in company are the foundations of the seven games that we present to you below …

Do you remember those afternoons of vice with your friends ‘split screen’? Well, they are still there, even if it seems like not, and in an improved way that allows you to share chops with anyone in the world. We teach you the seven best cooperative online games of consoles PlayStation, Xbox, Nintendo and PC so that you join forces with your companions and conquer the battle front.

For those who do not know, a cooperative game mode is one in which we can play the campaign of a game, online games or rounds of enemies, joining other players (usually 2 to 4), both in local mode and using the internet connection. Most of these titles require an online game subscription, such as PS Plus, Xbox Live Gold or Nintendo Switch Online, to play.

It has to be said that in this report games are mentioned that focus a large part of their fun on cooperative modeSo you won’t find online multiplayer games like Fortnite, Apex Legends, or Fall Guys. When facing the following titles you must take into account the support of your teammates and survival in a group to be able to overcome rounds, better scores and challenges.

The saga Borderlands is always a good option that guarantees hours and hours of cooperative fun. We want to recommend you the latest, its third installment, which you can enjoy in 4K on the new PS5 and Xbox Series X consoles, as well as on PC, PS4 and Xbox One.

Borderlands 3 allows you to play its main mode and online multiplayer cooperatively, in games of 2 to 4 players in which we will have to face a multitude of enemies, explore the planet Pandora and enjoy important loot. The novelty is that this time we do not have to share the loot, as was the case in previous installments, but each player will have their own.

It is a looter-shooter, a first-person shooter game with RPG touches in the purest Destiny style, with tons of humor, gore and bizarre situations. Don’t hesitate and get the Gearbox and 2K game if you want to have a blast with your friends in cooperative games.

We continue with another looter-shooter, and it is none other than Destiny 2. Bungie’s game has already established the foundations of its success with the first title, but the online and cooperative multiplayer formula is much more polished and more intense. Plus, it has tons of DLC and expansions.

Destiny 2 is a first-person shooter that has a careful story, which we can play cooperatively, but the highlight is online games with up to 6 players. If Borderlands 3 was post-apocalyptic science fiction, Destiny 2 is an extensive futuristic journey through a large number of planets and worlds.

We have different races and classes (Titan, Sorcerer and Hunter), as well as all kinds of weapons, skill cards and power-ups, and that without forgetting the New Light expansion, which is a full-fledged free to play. In December the next-gen update will be available for PS5 and Xbox Series X | S consoles, so if you don’t have it, it’s a great opportunity to get hold of it.

This Ubisoft game is one of the great cooperative options in the console and PC catalog, and without a doubt a delivery that surpasses the original The Division. Post-apocalyptic themed, The Division 2 immerses us in a virus-infested New York, in which we must explore, face hordes of enemies and save the world from desolation.

Like Borderlands 3 and Destiny 2, it is a looter shooter, but this time in the third person. We must go up levels, unlock weapons and skills, get loot on the map, and cooperate with our companions at all times. We can play campaign mode, online games or the so-called Dark Zone, in which there will be no mercy and we will have to snatch the rewards from the other teams.

The Division 2 features tons of hours of fun, even more so along with its Warlords of New York expansion. You can get the updated title for next-gen PS5 and Xbox Series X | S consoles, keeping the gaming community more alive than ever.

One of the The best cooperative options on the market is Gears 5, the fifth installment in Microsoft’s exclusive saga, available on Xbox One, PC and the new Xbox Series X | S. If in previous installments we could already play different modalities with our friends, now the possibilities are multiplying.

On the one hand we can play the campaign mode, which allows up to 3 players in cooperative mode. The absence of a fourth player is due to technical difficulties, but it is a luxury to enjoy the Gears 5 narrative with our friends, and also with different abilities for each character.

This is the best cheap gaming PC that we can buy for the 500 euros that PS5 and Xbox Series X cost, a decent PC, but a far cry from the new consoles.

If you are more into crushing enemies non-stop, you have the classic Horde Mode, which you surely remember from Gears of War 2. Together with three other friends, in local or online mode, you will have to overcome rounds infested by Locust and other enemies. In online mode, we can play Escape, which consists of defeating enemies against the clock in a large maze, while fleeing from a poisonous gas.

Rockstar’s leap into the open online worlds is evident in GTA Online and Red Dead Online, the two multiplayer strands of GTA V and Red Dead Redemption 2. Be it in a huge city or in the Wild West, the community of players in both titles is exorbitant to this day. You can enjoy them on PS4, Xbox One, and PC, and soon on the new PS5 and Xbox Series X | S consoles.

GTA Online allows us to enjoy a sandbox with our friends or anyone in the world, and perform all kinds of activities, challenges, tasks, without forgetting the great customization options. We can have crazy races, rob banks with our gang, play minigames, ‘goat’ around the city, explore the vast world of GTA together and much more …

Although GTA V and GTA Online are many years old, the adventures of Los Santos never end. Whether you’re new or a veteran gamer, here are a few helpful tips to get the most out of the game.

For its part, and although Red Dead Online is not as extensive as its modern counterpart, it also offers hours and hours of cooperative fun, whether we want to explore the Wild West, make horse races, fulfill bounty hunter contracts, very varied game modes and all this constantly growing.

A deep action RPG that in its multiplayer mode becomes one of the best possible options to play with friends. Capcom’s hit game, along with its Iceborne expansion, can also be played alone, but the ability to team up with other people multiplies the fun.

In Monster Hunter World we will have to join forces with our friends to explore unexplored worlds, defeat gigantic creatures, hunt monsters, complete missions, customize our characters with weapons, armor … in short, endless options. And if the cooperative modes seem few, we can always recruit anyone in the world to join our hunting squad.

If the previous options did not convince you at all and you like the role, this huge Monster Hunter title will offer you hours and hours of fun with your friends, either on PS4, Xbox One or PC.

If you own the Nintendo hybrid console and were waiting for your moment, it has finally arrived. This hilarious action game with Marvel superheroes is an option highly recommended if what you are looking for is a cooperative multiplayer different from anything seen before.

We will have an extensive cast of Marvel characters to choose from, and together with three other friends we will have to complete missions, defeat all kinds of enemies, face battles against supervillains and final bosses, level up, unlock skills and a long etcetera. If you’ve already played other games in the series on portable consoles, this Marvel Ultimate Alliance 3 ups the ante, offering long gaming sessions.

Put yourself in the shoes of Wolverine, Captain America, Hulk. Iron Man, Nick Fury, Spider-Man and many others to face the Black Order and face an epic battle against Thanos, the powerful villain from Avengers Infinity War and Avengers Endgame.

We tell you which are the best and funniest cooperative games on Nintendo Switch to play as a couple in local mode. Ideal to have a great time.

What did you think of this list of the best online cooperative games? Are you already clear with what game to distribute tow with your friends? These are the best options to enjoy in the company of your console or PC, if we talk about cooperative online modes. Prepare your weapons and play as a team … now for them.