Surrounded by much expectation since since September 2019 it was not celebrated in its canonical format, tonight a new Nintendo Direct, in which the Japanese company that has left us as usual with multitude of ads, some as important as Splatoon 3 or The Legend of Zelda: Skyward Sword HD, among many others. Below let’s go over everything what this presentation has given, which lasted 50 minutes, and in which they have announced multitude of new games for Nintendo Switch.

One of the great successes of Nintendo in recent years has been the new Splatoon saga, and the Direct has closed with the most important announcement of all: Splatoon 3, which coming to Switch in 2022. The trailer anticipates a considerable change of scenery compared to what was seen in the first installment of Wii U and in the sequel to Switch: the first thing the player sees is not a square full of clothing stores and cutting-edge technology, but a desert where to customize your inkling and his pet companion. The goal, of course, remains paint a larger area of ​​the map with our team’s color than the opposite, but for this there will be a greater variety of weapons, some novel gadgets (you see a robot grenade with legs), and of course, many cosmetic objects that were not in the previous games. Also, it seems that this time the players they fire with some cannons towards the battlefield instead of appearing directly ah.

Eiji AonumaProducer of The Legend of Zelda series, he first apologized for not releasing new information on the sequel to Breath of the Wild, which we will hear about later this year, and then announced The Legend of Zelda: Skyward Sword HD. , a remastered version of the game that was released in 2011 for the Wii. In addition to high definition graphics allow you to play the original experience, with the Joy-Con motion control, or also with buttons, controlling the movement of the sword with the right stick. Arrive on July 16th and will have a price of 59.99 euros.

Also, a couple of special Joy-Con controllers: the right command is inspired by the Master Sword and the left by the Hylian shield, which will go on sale with the game on July 16, and which can already be booked through the eShop. 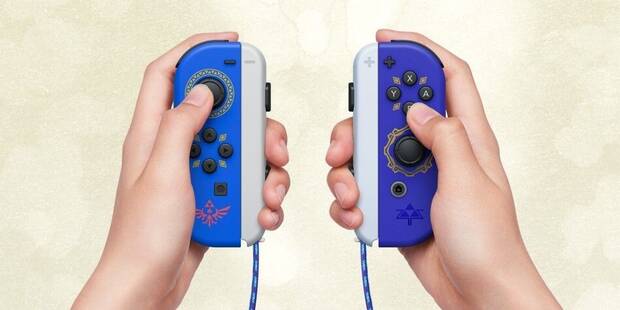 Square enix has announced its new game for Switch: Project Triangle Strategy, an ambitious strategy and role-playing adventure what arrive in 2022, and that You can already try thanks to a free demo available in the eShop. Project Triangle Strategy comes to revive the genre of tactical RPGs in the most traditional but ambitious way possible, with an isometric perspective that combines pixel art drawing with three-dimensional settings, giving a sense of depth that goes perfectly with this game. style of play, and reminiscent of great classics from the second half of the 90s. narrative scenes with decision-making with strategic combat on stages at various heights, and during its presentation much emphasis has been placed on the amount of possibilities that the players will be able to experience throughout the adventure, even going so far as to ensure that the choices we make with our heroes will lead us to live unique moments that may not have anything to do with it. to do with those experienced by other players.

The Nintendo Direct has started with the announcement of new characters for Super Smash Bros. Ultimate, the fighting game for Nintendo Switch. We speak in the plural because, once again, there are several fighters who will come to Masahiro Sakurai’s game, specifically Pyra and Mythra from Xenoblade Chronicles 2. Super Smash Bros. Ultimate receive their new characters in March, although the specific day of his arrival is about to be specified.

Koei Tecmo has announced Ninja Gaiden: Master Collection, which will arrive on Nintendo Switch, PC (Steam), PS4 and Xbox One on June 10, 2021. Koei Tecmo has announced this compilation of the three installments of the reboot of the saga. This Master Collection includes adaptations of Ninja Gaiden Sigma, Ninja Gaiden Sigma 2, and Ninja Gaiden 3: Razor’s Edge. The company ensures that all additional content published after the games were released in their day, published in 2007 (PlayStation 3), 2009 (PlayStation 3) and 2013 (Wii U) respectively.

A new Mario Golf for June 25

Another of the announcements by Nintendo itself has been that of Mario Golf Super Rush, a new installment of the golf saga that launches on Nintendo Switch on June 25. This new release incorporates motion control, online multiplayer and a couple of new modes, As the Fast Golf, which presents us with a race through the field using the unique abilities of each character and challenging us to get the ball to the hole before the rest of the opponents, and include an elaborate history mode, in which controlling our Mii we will have to improve little by little.

No More Heroes 3 already has a date

No More Heroes 3 coming to Nintendo Switch on August 27th 2021. The release date has been revealed alongside a new trailer, where novelties in the combat system are presented in addition to some of the relatively routine activities that the charismatic Travis touchdown between murder and murder.

Nintendo has announced that Fall Guys: Ultimate Knockout will premiere on Nintendo switch in summer 2021. The new ones have been produced in the Nintendo Direct broadcast on the night of Wednesday February 17, the first broadcast of this type since September 2019. Neither the Japanese company nor the publisher, Devolver Digital, have announced the price that the title will have in the hybrid console. On PS4 and PC (Steam), the other platforms it is available on, it costs 19.99 euros.

Square enix It has also announced Legend of Mana for Switch, PS4 and PC, a remake of the role-playing game that was originally released between 1999 (in Japan) and 2000 (in all other markets) exclusively for the first PlayStation, although later it was playable on PS3 too. This remastered version in high definition will have improvements such as new arrangements on the soundtrack (although you will also be given a choice between playing with the new remastered music or, on the contrary, doing it with the original) and the option to disable enemy encounters. This relaunch of Legend of Mana will also bring us a curious minigame called Ring Ring Land that was played with the Pocket Station and was never released in the West.

One of the most surprising announcements that this Direct has left us is that of Miitopia, a new version of the game originally released for 3DS in 2017. Players will embark on a laughing adventure in the company of family and friends to stop the evil Archmage and stop him from slapping people’s faces. In Miitopia, a customizable adventure for Nintendo Switch, lPlayers can create and mold Mii characters in the image and likeness of anyone they meet, and then they are assigned different roles and personalities to live a very fun adventure. Coming to Nintendo Switch on May 21th.

Star Wars: Hunters, a free-to-play game based on the popular saga

Another surprising announcement has been that of Star Wars: Hunters, a game of team multiplayer action, in which players can create squads made up of new and unique characters from the Star Wars universe, from fierce bounty hunters to heroes of the rebellion to Imperial stormtroopers. The action takes place between the events of episodes 6 and 7, and it will be a game free free-to-play.

There is little left to enjoy Monster Hunter Rise, one of the most anticipated games of the year for Nintendo Switch, which will be released on March 26th, and that has been seen in this Direct with a new and spectacular trailer.

More and more games for Switch

As we have already mentioned, this Direct has left a multitude of announcements for Nintendo Switch, such as Tales from the Borderlands, Telltale’s acclaimed narrative adventure that will go on sale on March 24th; Plants vs. Zombies: Battle for Neighborville Complete Edition, the multiplayer shooter for all audiences is coming to Switch on March, 19; Outer Wilds, one of the most acclaimed indies of 2019 arriving this summer a Switch; and Stubbs the Zombie in Rebel Without a Pulse, the remaster of a long-forgotten game that was released for PC and the first Xbox in 2005, and is now returning to current platforms on March 16; SaGa Frontier Remastered, a remastering of a game that was originally released for the first PlayStation in 1997, get to Switch on April 15.

Knockout City has been announced, an action game dodgeball multiplayer published by Electronic Arts that will reach all platforms on May 21th; DC Super Hero Girls: Teen Power, a game based on the hit Cartoon Network animation series that allows players to embody teenage versions of classic DC superherones such as Batgirl, Supergirl and Wonder Woman, and that will be released in the next week. June 4th; Famicom Detective Club: The Missing Heir and Famicom Detective Club: The Girl Who Stands Behind, two classic Nintendo games that arrive in Europe for the first time remastered and localized with English texts, will be released today. may 14.

Finally they have announced Neon White, a game of frenzied first person action with letters about exterminating demons in the sky, published by Annapurna Interactive (winter 2021), Samurai Warriors 5, a new installment of the Koei Tecmo musou saga that will come out this summer, and World’s End Club, the new adventure from the creators of Danganronpa, which mix action and narrative and May 28.